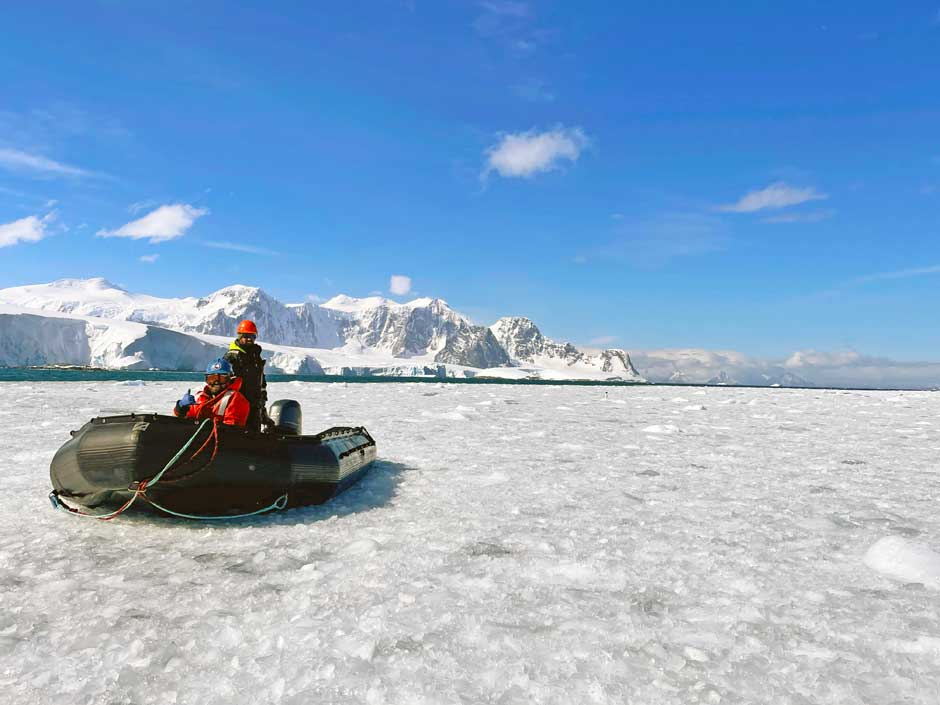 Marine technicians navigate an inflatable boat through ice to retrieve science staff from a remote deployment. Note that the size and condition of this ice easily hides hazards such as rocks or even larger, more dangerous chunks of ice. (Credit: Anna McBee)

For Paul Savoy, sailing on the Nathaniel B. Palmer research vessel as part of the United States Antarctic Program (USAP) has been a dream come true, a “mountain top” for his career. “I grew up reading about the age of exploration, and the great polar explorers back in the day. Antarctica is one of the last remaining frontiers, along with the deep ocean and outer space. I was delighted to discover Antarctic research covers all three, with deep ocean research happening on the icebreakers and cosmological experiments at the South Pole. I’ve been applying for a job down here since I was 18. I got shortlisted a few times, but never actually got picked up until I was 32. Now I’m 35, and finally headed to the ice. Wish me luck!”

Savoy is a marine technician (MT) on the voyage. MTs assemble, operate, and maintain the science equipment, and even fabricate parts from scratch if something is forgotten or broken. They also handle deck operations and run the small boats, all in the extreme environment of Antarctica. “MT positions are one of the last great job opportunities for generalists, as we are required to do so many different things on board,” says Savoy. “Welding, woodworking, boat handling, science, heavy equipment, mechanical repair; a thousand other things. We aren’t the best at any one thing; instead we have to be able to do a million different things to a professional standard. That suits me. I think cultivating polymathy was the best possible prep.” 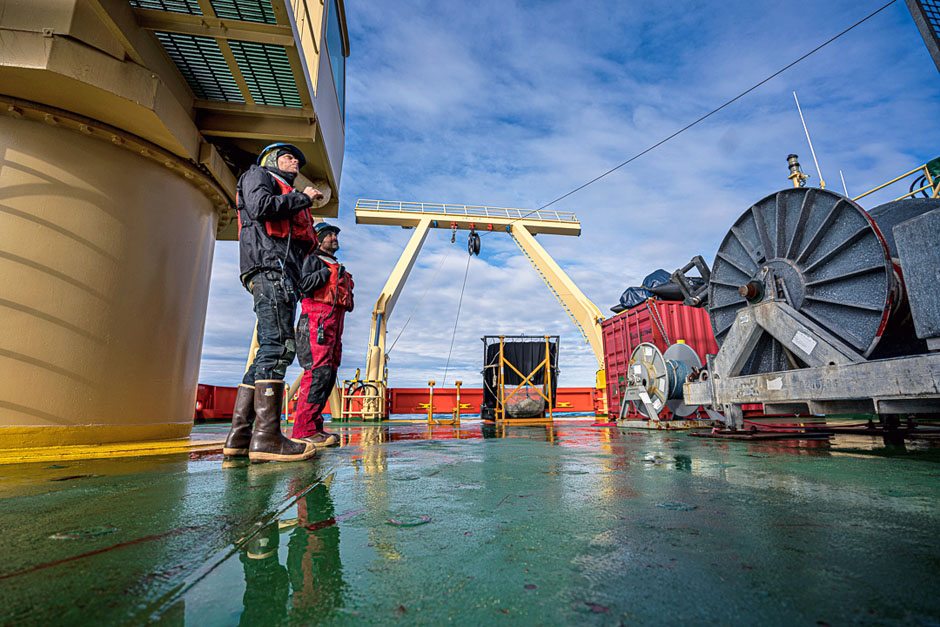 Marine technicians on the rear deck of the icebreaker Nathaniel B. Palmer assess the rigging of the aft winch during deployment of a trawl net, used to determine populations of various species at a given depth. (Credit: Anna McBee)

The USAP was founded in 1959 and manages all U.S. scientific research and related logistics in Antarctica, including aboard ships in the Southern Ocean. USAP works with universities, research institutions, and government agencies from all over the globe. “USAP pushes the boundaries of knowledge and technology. There’s thousands of ongoing studies and experiments, on everything from cosmic neutrino detection to mapping ocean currents globally. I’m really hard pressed to think of an arena of science that USAP isn’t involved in somehow,” says Savoy.

On Savoy’s current mission, scientists will collect various data involving seal tagging, whole ocean chemical profiles with a conductivity-temperature-depth (CTD) rosette, drilling marine sediment cores, running trace metal sampling tests on seawater, and more. “It’s also common for NASA and other groups to put atmospheric sniffers on board to test for various molecules as we travel- sometimes refrigerants, sometimes radioisotopes, sometimes others. The boat itself gathers bathymetry pretty much all the time. Each experiment yields HUGE amounts of assorted data. It’s expensive to be out there, so we really try to wring every drop of science we can from our efforts. For instance, The CTD groups run dozens, sometimes hundreds of tests per sample on a wide array of parameters, and the rosette itself is usually equipped with an acoustic doppler current profiler, which tells us about particulate loading and movement at a given depth in the ocean. That data is used to map currents and nutrient flows and so on,” Savoy explains. 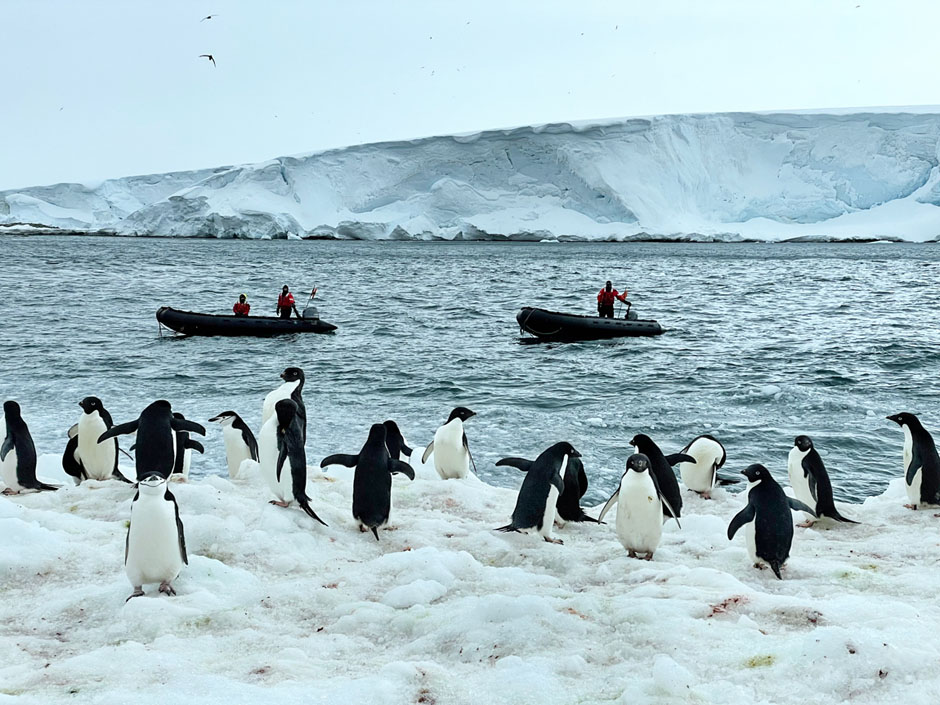 Marine technicians stand by to retrieve science staff. Boats and boat personnel are kept offshore whenever possible to minimize disturbance to the animals. (Credit: Anna McBee)

Some of the major issues in Antarctic research right now concern specific glacier complexes. “Different research groups have different priorities, but one of our major concerns is the future of the Thwaites glacier complex, and its effects on global sea level rise, ocean currents, and weather. We’re also trying to understand how glaciers interact with land masses as they melt, and use that data to refine models for predicting other glacial systems around the world,” says Savoy. “The only downside of being an MT is that the researchers often take years to parse and analyze the data we’ve collected, and we don’t see the results until they are made public. We don’t get to personally see trends as they emerge from the raw data.”

Savoy was drawn to the voyage by the science and the rigors of gathering data in the extreme environment of Antarctica, but the lure was also the larger adventure itself. “I had a lot of personal goals in coming here; I wanted to cross it off my bucket list, and I wanted to challenge myself and reclaim some things I’ve lost along the way. But perhaps more importantly… I’m a teacher at heart, and I really enjoy using my Antarctic experiences to encourage curiosity and a hunger for adventure in kids,” Savoy reflects. “They all think being a scientist exclusively means a lab coat and test tubes and impossible math. And sometimes it does. But I love teaching teenagers that sometimes science means a beard and a big wrench and monster waves. There’s far more adventure left in the world than people imagine, and we can do good things with it.”