Trees With Lowest Hydraulic Safety Margin Most Susceptible To Drought 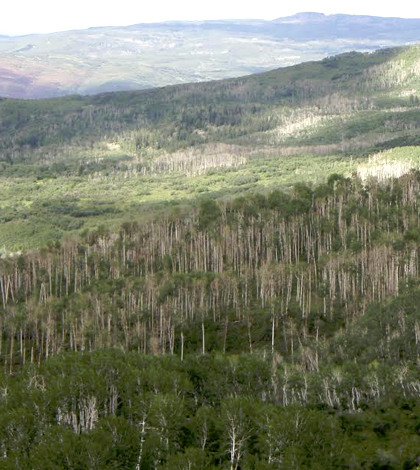 As drought has persisted in many places across the globe, especially in the American West, determining how trees will respond to prolonged dryness becomes a question of increasing importance.

Bill Anderegg, assistant professor of biology at the University of Utah, has spent many hours trying to answer that question, as have the small team of colleagues that works with him on understanding the critical issue.

Anderegg and his colleagues performed a meta-analysis of drought survival studies on trees all over the Earth, incorporating data from many smaller studies involving thousands of individual trees. Forestry experts could use their findings to better manage forests and attempt to predict which trees might need the most help while better utilizing limited resources along the way.

“There was a patchwork of other studies on tree survival under drought conditions, but there was no broad study. We did our quantitative analysis of the scientific literature to try to fill that gap,” he says. “There were about 475 tree species that we incorporated into our meta-analysis.”

The intention was to relate tree physiology to drought resistance. Comparisons were made between deciduous and evergreen trees, and mortality rates of each species were carefully scrutinized. Data spanned several decades and included measurements taken before and after drought conditions.

Anderegg and others tried to include factors in a statistical analysis that accounted for the varying quality of data in each of the smaller studies they incorporated. Some studies were larger or smaller and had varying precision or differing sample sizes. To make the cut for inclusion, studies had to have at least several species with 10 trees per species and a variability in sample size of 40,000 to 50,000 trees. The team used R statistical software to find significant relationships between various tree physiological factors and mortality following drought. A random factor was also used to account for different regression slopes across studies, which accounts for unmeasured factors, such as different drought severities and soil types.

Trees transfer water from their roots to stems under high tension; the less water there is, the harder they must pull to get the water to flow up the stem. When there is very little water, air is pulled up from the roots instead, causing air embolisms, which damage the tree. The “pipes” of the tree aren’t physically broken, but the water column is broken. “It’s like a heart attack for the tree,” says Anderegg.

In addition to deciduous and evergreens, researchers considered angiosperm and gymnosperm trees.

“We didn’t see strong relationships between any of these and how well trees were surviving drought,” says Anderegg. “We were also surprised that we did not see a strong relationship between rooting depth and whether a tree survived drought.”

“Trees have different strategies for surviving drought,” says Anderegg. “Successful trees are ones that prevent water loss by closing the stomata on their leaves. Trees that behave in a riskier way do not prevent water loss in their leaves and focus instead on continuing photosynthesis even in drought conditions. The trees that do this have a much harder time surviving drought.”

Scientists considered geographical differences, like whether the soil the tree was in was of good quality. Elevation was another factor, with hotter and drier conditions at low elevations affecting trees more during drought than at higher elevations.

Another factor was whether trees were on south-facing slopes, where radiation causes higher water evaporation rates than on northern slopes. Trees on south-facing slopes therefore tend to experience more stress from drought. For example, in the Southwest, Pinyon pine seemed more vulnerable to drought effects than juniper, and aspen seemed to be more vulnerable than Ponderosa pine. “For example, Pinyon pine were under attack by bark beetles, then they experienced drought. Since they were already weakened by the beetles, their ability to survive the drought was likely significantly compromised. It was like they experienced a one-two punch and couldn’t recover,” says Anderegg.

Individual tree genetics also play a part in drought response, but there is not yet a lot of information available on the topic. Anderegg says more research needs to be done on the P-50 trait in different tree species.

At least one study was included from every major biome across the globe. There were more data for the United States than other regions, however, with 10 studies dealing with the U.S.

Anderegg was surprised in some ways at the results. “I thought rooting depth was going to be more important than it turned out to be. Then again, maybe if we had more data, or better data, it might prove to be a more significant factor,” says Anderegg. “I also thought the sensitivity of the stomata trait would be more important, but there again maybe more data would show a greater correlation.”

In the future, Anderegg hopes to delve into genetic differences of individual trees that may influence drought response. He also hopes to get sensors to measure water transport and water tension in trees.

“The gold standard is still pressure-chamber data from individual trees,” he says. “But we’d like to be able to not only look at the drought response of single trees but also large groups of trees at one time … using laser-guided spectroscopy in an aircraft.”