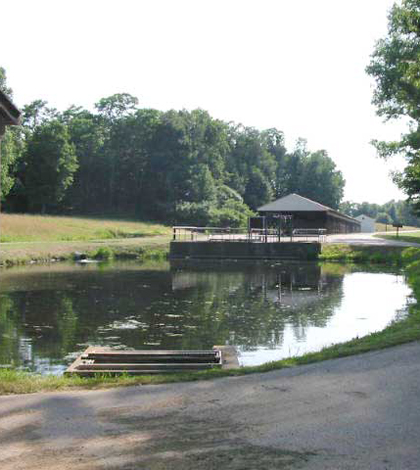 Trout Run, a small stream running through Fairview, Penn., is impaired by excessive nutrients and siltation. Though it’s separated from larger tributaries, it flows directly into Lake Erie and plays a role in ongoing work to mitigate nutrient loads going into the Great Lake.

Scientists studying Trout Run’s issues considered agricultural land upstream as a possible source for the contaminants, as well as a few nearby ponds that harbored high phosphorus levels. But a state fish hatchery in the city, known for producing large populations of steelhead trout, was also a suspected source.

Andrew Clark, a recent master’s graduate from Gannon University’s environmental health and engineering program, studied Trout Run from the end of March through October 2013 to see what role the hatchery plays. His results will help inform the Pennsylvania Department of Environmental Protection and other researchers working to put together baseline data for planned federal cleanup work in the area.

Clark’s study extended to all of Trout Run, where he sampled at six sites along its route to get a broader view of the hatchery’s role. At those locations, which began 100 feet above the stream’s northern mouth, he collected water samples using sterilized bottles.

“The grab samples reflected the low-flow water quality (of the stream),” said Clark. “The nitrate levels were moderately low. But orthophosphate was very high.” The Lake Erie Binational Nutrient Management Strategy sets standard criteria for total phosphorus at the mouth of streams entering the lake at .032 milligrams per liter. Clark says all of the samples had orthophsophate levels (a component of total phosphorus) above that target level, though some got close.

“They both (nitrate and orthophosphate) tended to increase with distance downstream,” said Clark.

Total suspended solids in Trout Run were low, while Clark found bacteria levels varied depending on the location. The highest levels were found near Fairview. Across the stream, dissolved oxygen and pH levels were in acceptable ranges. Water temperatures, Clark says, were reliably elevated across sampling sites.