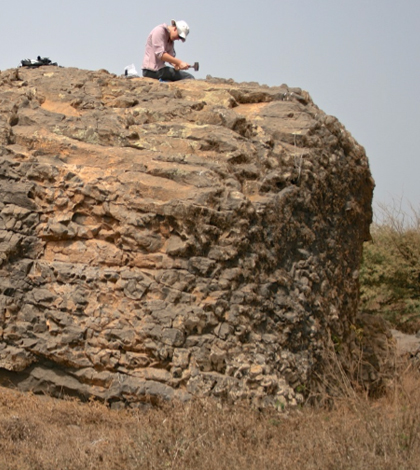 Geological events leave traces behind. The evidence they leave can linger for a few years, or even thousands of years. But few geological events are so exceptional in magnitude that they leave signs like 700-metric-ton boulders flung up slopes 270 meters above sea level, boulders that still remain 73,000 years later.

Ricardo Ramalho, a Marie Curie postdoctoral research fellow at the University of Bristol and an adjunct professor at Lamont-Doherty Earth Observatory of Columbia University, along with a team of researchers, has found the stranded boulders tell the story of two huge geological events that happened thousands of years ago: a volcanic collapse and a mega tsunami that followed afterwards.

Using Helium-3 cosmogenic exposure dating of tsunami deposits from olivine mineral separates extracted from the boulders’ top surface, Ramalho and coworkers found the clues they needed to show that it was not a number of small landslides that impacted the Earth 73,000 years ago, but a single giant event.

Ramalho’s work concerns the evolution of volcanic islands, in particular the Cape Verde Archipelago near West Africa. In his fieldwork, he found mega tsunami evidence by chance and decided to investigate the subject, attempting to answer the question of what happened 73,000 years ago and whether it might even be possible for such a huge event to happen again. Explaining his methodology in a little more detail, Ramalho says his cosmogenic exposure dating on the boulders relies on the fact that “when a geological surface is created — in this case by the erosion and transport of the tsunami — it gets exposed to cosmic rays, which interact with the surface’s minerals to produce cosmogenic nuclides (in this case cosmogenic Helium-3 from olivines)… since this production rate has been measured and therefore is known, when we measure the total amount of these nuclides at the said geological surface, we can work out how long that surface was exposed to cosmic rays.”

He notes the work was done with Professor Gisela Winckler, an expert on the cosmogenic exposure method.

His work in this area is not without some controversy, as there are some who believe it might be more likely that it was a series of smaller geologic events that caused the changes he has observed. However, Ramalho believes there are two lines of evidence that attest to the impact of a mega tsunami, not just several smaller ones.

“First,” he says, “there are fields of stranded boulders over a fairly young volcanic landscape, which correspond to lithologies that are only exposed lower down, at the cliff edge (at 150 to 180 meters above present sea level), cliff face and lower slopes of the plateau…so all these boulders attest to a highly energetic inland and upslope transport and deposition process, compatible only with the impact of a mega tsunami.”

He says these boulders weight up to 700 metric tons and litter an area that is 150 to 220 meters in elevation. “So, these boulders are interpreted as ‘tsunami megaclasts,’ that were quarried from the lower slopes and transported inland and upslope onto their present position in the plateau,” he says. “Since we have dated the deposit, we know what was relative sea-level at the time of impact, which was about 50 m lower than today. This means that the tsunami attained a run-up (inundation elevation) of at least 270 m above coeval sea level.” Fogo volcano seen from northern Santiago.The cliff face in the foreground is the source for most boulders transported by the tsunami. (Credit: Ricardo Ramalho)

The second reason he believes there was a mega tsunami is because his team has found conglomerates and sand sheets with all the classical tsunamigenic features, mantling on the lower slopes, from present sea level up to about 150 meters in elevation.

“These sedimentary bodies exhibit the typical chaotic texture,” he says, “with very large boulders jumbled with smaller sediments, featuring mixing of marine elements such as beach sand and pebbles, marine shells, corals etc., with slope elements such as pieces of soil ripped from the slope, blocks of rock fallen from the cliffs detached by slope processes.”

To Ramalho and his team, the spatial distribution of all these pieces of evidence suggest a transport direction towards the eastern quadrant, i.e. incoming from the west, where the Fogo volcano is. The collapse of Fogo volcano was well known to earlier researchers and previous works suggested it was likely to have happened between 124,000 and 65,000 years ago.

“Our own geochronology work suggests an impact at 73,000 years, which confirms that Fogo was indeed the source of this tsunami,” Ramalho says. “Our work thus confirms that volcanic flank collapses may happen catastrophically and generate giant tsunamis with devastating near-source effects.” It seems possible to him that, while not a common event, another volcanic collapse of this kind and another mega tsunami could occur again in the future.

Ramalho and his team do not plan to rest on their achievements but wish to continue exploring the area. They are especially interested in possibly mapping the tsunami deposits in better detail using airborne LIDAR. They would like to use the LIDAR to generate a centimeter-resolution digital elevation model.

Despite his familiarity with his subject, a sense of wonder still pervades Ramalho’s work on the volcanic collapse and mega tsunami. “We were surprised by the sheer size of the transported material, which implies a really massive wave,” he enthuses.