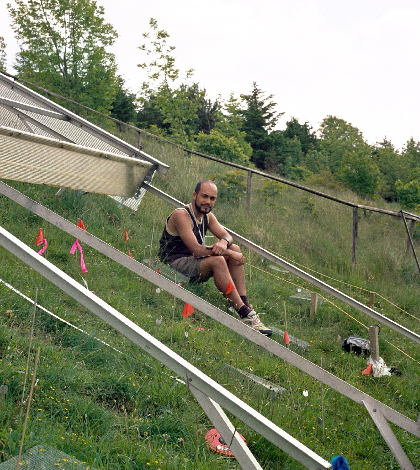 Few living things will avoid being impacted in some way by global climate change, and plants are no exception. Unlike many animal species, individual plants cannot move to avoid changing conditions and so they may be especially sensitive to the climate.

What plants do have, though, is an arsenal of genetic variation within each species. These are the genetic differences among individuals that give them different characteristic traits and represent the raw material for evolutionary change that can adapt organisms to new or stressful environments.

Dr. Raj Whitlock, Lecturer at the University of Liverpool’s Institute of Integrative Biology, is someone who knows this well, having recently discovered evidence for genetic changes within plant species in response to 17 years of experimentally simulated climate change at the Buxton Climate Change Impacts Lab. Whitlock and his colleagues observed the genetic effects of long-term climate changes on a natural pasture ecosystem containing native plant species. Their results show that genetic changes have occurred rapidly during the 17 years of experimentation at Buxton, indicating that such changes may be likely to occur naturally as the climate continues to become more extreme.

The lab has been operating since 1994. It enables climate manipulation of natural grassland plots, 3-by-3 meters in area. The plots have been created on species-rich limestone grassland with about 40 different plant species naturally occurring in each plot. “We can simulate three main conditions in these plots: drought, warming and extra precipitation,” says Whitlock. There are also control plots, which are not manipulated, and are exposed to the natural weather conditions.

In the drought treatment, rainfall is withheld from grassland plots for two months in July and August. These plots can then be compared to control plots that are freely exposed to natural rainfall. The drought simulation is imposed using automated retractable rain shelters made from a custom aluminum framework with a twin-wall polycarbonate canopy. During the drought treatment, a sensor can detect when it starts to rain, and motors drive the shelters over their plots. If the natural conditions are dry, then the shelters are retracted to an off-plot position, enabling natural illumination of the grassland.

Elevated temperature is another important manipulation carried out at BCCIL, since temperature is predicted to continue to increase as climate changes progress. The warming treatment uses 1000-watt Camplex Thermoforce heating cables on the soil surface. The soil is heated up to 3 degrees Celsius higher than conditions on neighboring control plots. The heating treatments are carried out from November through April. Lastly, increased rainfall can also be simulated, via irrigation, to explore the effects on the grassland plants and their genetic composition. This is performed using a network of polypropylene pipes at the surface of the watered plots, imposing irrigation to simulate rainfall at 20 percent above the long-term average.

The unique long-term climate manipulations at Buxton were only a part of Whitlock’s study. In order to determine how climate change impacted the genetics of his study species, he had to bring samples of his plants back from the field to the Molecular Ecology Lab at the University of Sheffield to extract their DNA and carry out molecular fragment analyses.

Whitlock used the Amplified Fragment Length Polymorphism method for DNA fingerprinting, and applied it to each of the plant samples. Polymerase chain reaction was used to assay hundreds of AFLP markers representing sequence variation within 4 to 6 base pair sequence motifs. The method was sensitive enough to see genetic differences between individual plants. He checked for genetic differences in the DNA of climate-manipulated plants versus control plants.

Individual plants were chosen for DNA analysis systematically, using fixed sampling locations within the plots at Buxton. Tape measures were used to map a series of individuals within each plot. Half-centimeter squared sections of plant leaf tissue were collected from each plant in the field and placed in a vial of silica gel to dry them quickly, preserving their DNA. In order to extract the DNA, the dried leaves were powdered, and then re-suspended in a detergent-containing buffer and enzymes to separate unwanted proteins and RNA. A chaotropic salt was used to precipitate and isolate the DNA onto a silica filter, from which it was later eluted using hot water.

Although the AFLP method has been a valuable tool since 1995, Whitlock’s most recent research has moved on to exploring the genomes of the plants at Buxton in far greater detail, using advanced genomics approaches. “Using these next-generation DNA sequencing techniques, I am currently screening tens of thousands of genes within two plant study species. I hope to be able to identify the genes that allow plants to adapt to altered climatic conditions at Buxton,” says Whitlock. Even in the research he has already conducted, Whitlock has seen climate-driven changes in many loci across plant genomes. The difficult part, however, was identifying from amongst those the changes that may have been caused by evolution. “Genetic changes that are distributed widely over the genome may indicate the operation of genetic drift due to a reduction in plant population size during climate change. In contrast, isolated spikes in differentiation above this background may represent the genomic signature of adaptive evolutionary change that is taking place at a particular gene locus,” Whitlock explains. Through careful analysis, Whitlock and his colleagues were able to detect patterns of genetic differentiation that supported the action of evolutionary change, driven by climate manipulation to the plants’ home environment.

In terms of the future of his research, Whitlock plans on wrapping up his current sequencing study. He is also eager to write up a four-year study carried out at Ness Botanic Gardens at the University of Liverpool, in which he has investigated how simulated climate change at Buxton has changed the plants’ characteristic traits. He continues to be fascinated by the question of how evolutionary changes and plant phenotypes can affect ecology.

“Although evolution can buffer species against environmental changes, it may also alter their ecological characteristics,” he says, “We know very little about how (or whether) evolutionary changes will impact on the functioning of ecosystems, and this is a very hot topic in ecology and evolution at the moment.”

The genetics study at Buxton was performed by Whitlock and a small group of collaborating scientists. Joint first author Dr. Catherine Ravenscroft contributed to the study as part of her doctoral studies with Professor Jason D. Fridley at Syracuse University. Professor J. Phil Grime, who initiated the experiments at Buxton, and Professor Terry Burke, who runs the Sheffield Molecular Ecology Lab (both from University of Sheffield), also contributed.