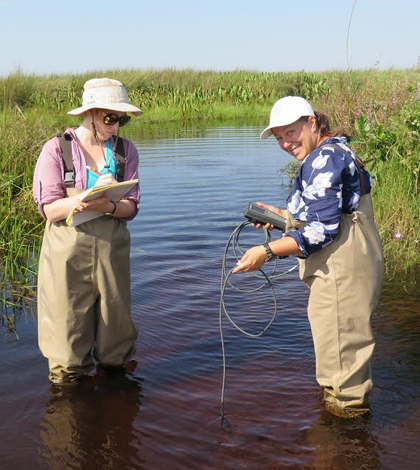 Like many other creatures, freshwater fish are dealing with the effects of environmental change. Of course they encounter issues specific to their biological needs, many of which are still being researched by scientists across the world.

Ohio State University researchers are some of those who are diving deep into the world of freshwater fishes to better understand how they are coping.

She is overseeing several ongoing projects in her lab that are focusing on the effects those stressors have. A few use African cichlids, fish that are commonly found in home aquaria, as their subject.

“In the lab, we measure dissolved oxygen, temperature and conductivity to ensure good water quality for the African cichlid fish we are using for our research,” said Gray. This is done using two YSI Pro2030 Dissolved Oxygen & Conductivity Meters. One is specifically for lab use, while another is used more flexibly, supporting sampling efforts “in the urban streams and rivers around Columbus, the shores of Lake Erie near OSU’s Stone Laboratory and Ottawa National Wildlife Refuge, and in swamps, rivers and lakes of the Nile River Basin in Uganda, East Africa.” In one novel project, Gray and others in her lab will begin rearing African cichlid fish in tanks with low dissolved oxygen levels to see how the fish respond. Conditions in the tanks will be monitored on a daily basis, Gray says, to keep the levels exactly where they need to be throughout the investigation.

The researchers have just returned from a summer sampling trip to Uganda where they gathered information on the cichlids in their native streams. The work to continue that investigation will compare data collected in Africa to those collected in the lab.

Gray says the results will be used in graduate student theses and peer-reviewed publications to describe fish habitat. Eventually, she is looking to amass a long-term data set tracking changes in the fishes’ environmental conditions over time.

“In the field, we measure the same parameters in order to gauge the quality of the water with respect to the fish communities living there,” said Gray. “The focus of research in my lab is trying to understand how fish respond to environmental change caused by human activity.”