Underwater robot to monitor oil pipeline under Straits of Mackinac 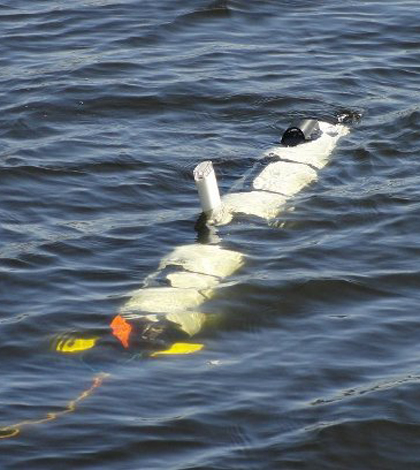 The IVER3 autonomous underwater vehicle that will inspect Line 5 under the Straits of Mackinac (Credit: Michigan Technical University)

Researchers are outfitting a new generation of underwater robot for a challenging mission: inspecting an oil pipeline at the bottom of the Straits of Mackinac, a turbulent and ecologically sensitive waterway where Lake Michigan meets Lake Huron.

The pipeline’s integrity is a growing concern for environmentalists and others living near the straits. Activists held a rally in July to draw attention to the pipeline, which was installed in 1953.

Michigan Technological University received the IVER 3 autonomous underwater vehicle in September. The university is partnering with the pipeline’s owner and operator, Canadian company Enbridge Energy, to make it easier and less expensive to inspect the portion of the aging Line 5 that runs beneath the straits at depths up to 270 feet. The line transports light crude and natural gas liquids from Wisconsin to Ontario.

“Our ultimate goal is to do these inspections four times a year, instead of once every five years,” said Guy Meadows, director of MTU’s Great Lakes Research Center. “Our approach was to buy the best available commercial vehicle and work on the sensor parts and navigation parts to make it even better.”

Built by Massachusetts-based Ocean Server Technology, Inc., the robot—which carries out pre-programmed missions that require no connection to scientists on the surface—can dive up to 100 meters during missions as long as 12 hours.

“If everything goes well, it tells you everything it learned during that time,” Meadows said. Meadows and team sent the robot on a trial dive in last September, with mixed results.

“The flows in the straits periodically can be very strong, so it’s not possible to just send an older-generation autonomous vehicle merrily on its way and have it keep the object of interest within view,” he said.

The robot followed the pipeline for long stretches and brought back useful sonar images. But it struggled with the straits’ strong and chaotic flows. The research team is working to model the little-understood currents and upgrade navigation algorithms to help IVER 3 keep the pipeline in view across the waterway’s five-mile width. They’ll take it out for another spin if this year’s spring melt ever arrives in northern Michigan. Side scan sonar images collected by the IVER 3 under the Straits of Mackinac during a trial run (Credit: Michigan Technological University/Great Lakes Research Center)

Those currents and the pipeline’s proximity to Mackinac Island and other tourist attractions raise concerns among environmentalists and others about the damage an oil spill would inflict on the region. Few paid much attention to the pipeline until recent spills brought increased public attention to the way oil is transported. Most notably, Enbridge’s own Line 6B spilled an estimated 843,000 gallons of heavy crude—and perhaps more than a million gallons—into the Kalamazoo River in southern Michigan.

“A significant rupture would cause an Exxon-Valdez scale oil spill spreading through Lakes Huron and Michigan, the heart of the largest freshwater seas in the world,” the National Wildlife Federation wrote in a report on Line 5.

Enbridge was responsible for more than 800 oil spills totaling close to 7 million gallons between 1999 and 2010, according to a separate NWF report. The Mackinac Bridge spans the Straits of Mackinac (Credit: Doug Kerr, via Flickr)

Company spokesperson Jackie Guthrie said Enbridge regularly monitors Line 5, and noted that it does not carry the heavy crude that has proven difficult to clean up after the Kalamazoo spill.

“Enbridge has invested millions of dollars in advanced monitoring and inspection practices and continues to make progress toward achieving our goal of zero incidents,” she said in an email. “All of our pipelines, including Line 5, are monitored in real-time, 24-hours a day. Routine aerial and right-of-way patrols are conducted…We also monitor for corrosion using internal inspection devices and other technologies to detect early signs of corrosion.”

Beyond monitoring the pipeline, Meadows said IVER 3 could also be useful for inspecting a wide range of underwater features, from electric transmission lines and municipal water intakes to fish spawning reefs. He also said the disappearance of Malaysia Airlines Flight 370 raises the possibility of using autonomous underwater vehicles to search for downed airplanes.