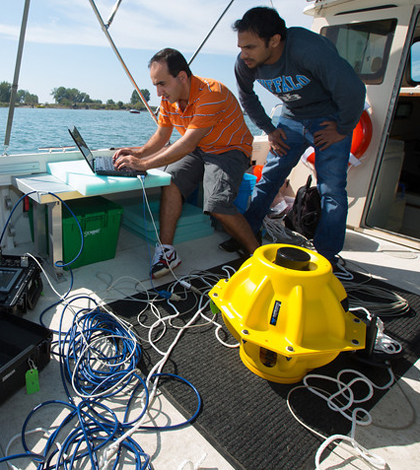 Long used by militaries and cargo ships for navigation, acoustic communications may soon support another promising use: underwater Wi-Fi.

The capability would allow for expanded environmental sensor networks in oceans and lakes. And researchers would be able to access data anywhere there’s an Internet connection, eliminating the need to schedule time on research vessels to retrieve network data.

Tommaso Melodia, associate professor of electrical engineering at the University at Buffalo, has been researching the possibility off and on for about a decade. He’s working with other researchers, including graduate students in his lab and professionals at Massachusetts-based Teledyne Benthos to develop devices that use acoustic modems to blast Internet protocol underwater.

The devices are large and yellow with a black acoustic sounder on one side. Their housings are similar to those used to carry seismometer packages in the ocean, but have a clear resemblance to marker buoys. Each weighs about 40 pounds.

“We have a sphere that protects. It’s about 10 inches in diameter with a standard modem board inside. A gumstix circuit board interfaces with the modem board and there is a transducer that emits the acoustic wave,” said Melodia.

Using acoustics to communicate underwater is better than other methods, Melodia says, because the waves propagate further in water than electromagnetic waves. And they have a successful track record that dates back to World War II.

Acoustic waves used by the military are continuous, says Melodia, and could impact aquatic life. His devices use low-power waves sent out at periodic bursts. These go mostly unheard by sea-faring creatures, affecting them less than waves sent on a sustained ping. Acoustics also allow for data transmission over a longer range than optical technologies, which are sometimes hindered by water clarity.

But a downside comes in the testing process, especially when the devices are held above water to run acoustic sounders through their paces. “It can sound pretty annoying,” said Melodia. So those tests are commonly done when everyone in his lab has gone home for the day.

Of course the high-pitched racket is put to good use once it’s under the waves. Several test transmissions in Lake Erie have gone through successfully. Melodia says the best way to test the potentially game-changing technology is to do things that you would typically do surfing the web.

“So we’ve done little things like send a tweet or transfer a file. We’ve sent messages to a smartphone,” he said.

On a small-scale at least, the technology has proven that sending data over underwater Internet is possible. Melodia envisions buoys on the surface, equipped with a receiver on one end and cellular transmitter on the other, will connect the devices to the rest of the Internet-enabled world. A diagram of how underwater acoustic sounders would connect to surface Internet networks (Credit: Hovannes Kulhandjian)

Looking ahead, Melodia says bigger leaps for the technology will rely on further research.

“At this point, our work is aimed at creating better data networks, faster and more reliable, more energy efficient,” said Melodia. “We need a lot of experience to transmit that theoretical data we have into a practical product.”