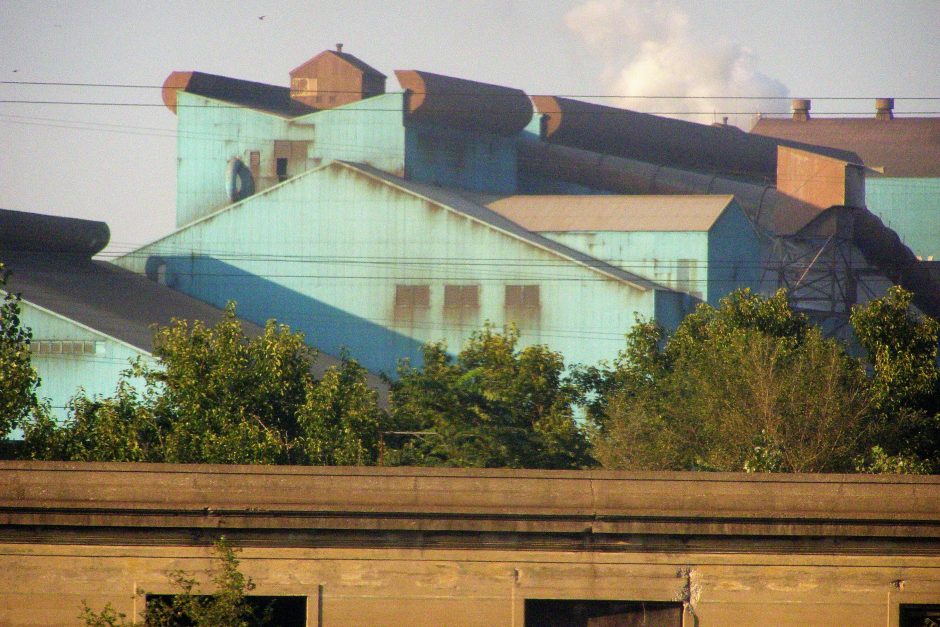 If you remember the movie “Erin Brockovich,” you are already familiar with hexavalent chromium, a toxic substance that was contaminating the drinking water of people in California in the movie (and in real life). Although on the silver screen there was a very satisfying Hollywood resolution to the problem, there has not yet been such a happy ending in real life. The dumping of the hexavalent chromium by PG&E that the film documented took place in the 1950s and 1960s, although the company didn’t tell anyone about the problem until the late 1980s.

Based on current litigation around the Illinois and Indiana shores of Lake Michigan, startlingly little has changed. Attorney Robert Weinstock of the University of Chicago Law School Abrams Environmental Law Clinic spoke with EM about the issues stemming from US Steel dumping chromium—some of it hexavalent chromium—into Lake Michigan.

“The way the Clean Water Act works, citizens can sue to enforce the act, but they have to provide the violator and the government regulators with 60 days’ advance notice of filing their lawsuit,” Weinstock explains. “In that time, what can happen—and usually does—is the regulators will step up and actually enforce the law. If they do, that basically limits what the citizen plaintiffs can do. Here, there has been no formal enforcement action taken against US Steel, and that’s why we moved forward with our lawsuits at the conclusion of our sixty day notice period.”

In other words, the citizen plaintiffs, in this case the Surfrider Foundation, were able to build their case by simply presenting public records, including the monthly monitoring reports that US Steel is required under their Clean Water Act permit to submit to the state agency, the Indiana Department of Environmental Management (IDEM). Neither US Steel nor IDEM took any kind of remedial action, despite complaints from the public about violative dumping.

This is even more egregious, given how easy to meet the standards themselves are.

“Under their permit and the relevant regulatory documents, the monitoring frequency and specific monitoring technologies and practices are spelled out,” Weinstock details. “Those standards and monitoring approaches are very dated. They haven’t been updated in a very long time. They don’t reflect modern technology. They’re spelled out in ways that are very easy for the discharging entity to game.”

In other words, US Steel must take at least five grab samples during each month—but they can take more should they need to dilute a high number. An industrial facility can also cherry-pick which days they sample. “For example, industrial facilities will have limits on bacterial pollution that is normally associated with human waste,” remarks Weinstock. “It’s remarkable how often those facilities decided to take the grab samples on the weekend instead of on a work day for fecal coliform, when they know no one’s using the bathroom because they’ve got a skeleton weekend crew.”

This isn’t just a US Steel problem, however; this is an issue that is endemic to the regulatory framework of the Clean Water Act throughout the nation.

“You really need robust oversight from the regulators as opposed to just saying groups like Surfrider can handle this,” adds Weinstock. “Because all we can do is look at the data that’s reported. We don’t have inspection authority. We can’t require additional of them to take additional sampling. We don’t have that authority. U.S. EPA does. IDEM does.”

However, if those agencies don’t or won’t use that authority, the issue is simply dropped, unless it is litigated—assuming it can be fought in court at all.

The Burns Canal and Lake Michigan The Indiana Dunes National Lakeshore is close to where US Steel dumps chemicals into Lake Michigan, and has had to close because of the dumping. (Credit: By Kevin Saff, CC BY-SA 2.0)

As it stands now, US Steel discharges wastewater into a small industrial ditch called the Burns Canal. It is around 100 yards from Lake Michigan. Local sewer systems also discharge into the Burns Canal, as do other industrial concerns. The canal also provides US Steel with usable water for cooling off its operations; once it uses the water for noncontact cooling, it discharges it back into the canal, hot.

US Steel has a permit for these uses, all under the Clean Water Act. Unfortunately, as with the regulatory chops provided by the CWA, the limits set by the permits are weak, and set a low bar.

“They have temperature limits, and during the last permit renewal they asked to have the temperature measured in the stream instead of at the end of their pipe,” Weinstock explains. “They asked for—and received—a complicated formula to determine where their hot water mixes with the water in the canal, which determines where it should be measured.”

The end result is that US Steel has argued that they are only responsible for “further” warming of the already warm water, even if further warming is dangerous. “Their permit essentially governs the amount of change in the water body temperature, rather than what they are actually putting into the water,” Weinstock distinguishes. “In our lawsuit we allege several violations of those provisions, despite that extremely forgiving way of evaluating whether their discharges are too hot.”

“Our suit doesn’t speak to the question of whether those numbers themselves are stringent enough to begin with,” Weinstock adds.

Hexavalent chromium or chromium-6 is a heavy metal known to be a carcinogen in humans and animals. In fall of 2016, the Environmental Working Group (EWG) released an analysis of EPA data that concluded that almost 200 million Americans from all 50 states are exposed to unsafe levels of chromium-6 in their drinking water. This comes from a variety of sources, but chromium-6 does not occur in the environment naturally, so all of those sources are human-made—produced by industrial concerns such as US Steel.

For their part, US Steel’s permit allows them to dump one-half pound of hexavalent chromium into the water every day. They are allowed to dump far more regular chromium every day. And based on how the regulations work, we citizens are all trusting US Steel and companies like them to simply do the right thing each day—but it doesn’t always work out in our favor.

Large spills in both April and October of 2017 released hundreds of pounds of chromium into Lake Michigan—a substantial portion of it chromium-6—close to where people use the beach, swim, and surf. The spills are also close to where the City of Chicago draws its drinking water.

“The limit for chromium itself is very high, and they didn’t come close to that limit in this October event, which I think was about a 56 pound discharge,” Weinstock details. “However, the limit for hexavalent chromium is only 10 pounds to trigger a more serious response. So had they tested the chromium and discovered that it was half hexavalent chromium, 25 or 28 pounds, that would have triggered these emergency response obligations. But because they didn’t test it, they were below the emergency reporting threshold for chromium, and that’s it.”

The April spill was reported, but US Steel attempted to keep the October spill—which was visibly bright blue—a secret. IDEM did not balk at their request, and it was only after legal action was taken that all of the facts came to light.

“Right before we sent our original notice of intent to sue [about the April spill] there was another illegal discharge of chromium in late October,” remarks Weinstock. “Even though they knew that chromium was not being routed to the correct treatment train, they chose not to test that discharge to see how much of it was hexavalent chromium.”

After all, if you don’t know how much is toxic chromium-6, there’s nothing to report. In the end they were faulted for not testing, but since it was unknown just how much spilled, that was the extent of their fault—at least on the record.

Add to this the fact that US Steel has laid off a number of maintenance workers from this plant in recent years. This has resulted in reduced shifts and rotating staff rather than dedicated maintenance staffs at particular staff at particular parts of the plant—the kind of trained, experienced staff who would immediately recognize a hazard such as chromium-6 leaking, and what that would look like, physically.

A microcosm for environmental distress

For Weinstock, the situation with US Steel provides us with a microcosm of the environmental distress our country is feeling in so many places, for at least two reasons. The first has to do with a failure to regulate; to protect an area that is critical to the public health and happiness.

The US Steel facility and the Burns Canal are directly across from Portage City Beach, one of the best surfing beaches, according to Weinstock and the Surfrider contingency. It’s also a popular municipal beach, right in the in the wake of the Burns Canal outfall. The Indiana Dunes National Lakeshore is about eight miles to the east as well, and both of these beaches were closed after the April spill. Drinking water intakes for Ogden Dunes, Indiana and the City of Chicago are also impacted by this problem.

“This highlights the long, tortured history of the imbalance between industry and environment in Northwest Indiana,” muses Weinstock. “You’ve got a real story about regulatory laxness there. Interestingly, neither U.S. Steel nor Indiana told the EPA about that October event until the Chicago Tribune reported on it, despite the fact that they were apparently in discussions with US EPA about the April event.”

This particular series of events, and the current political climate at the EPA as well as the White House, are also significant to this story.

“You have a facility that is cited in the Vice President’s home state,” adds Weinstock. “Many of the violations alleged in our complaint, they go back five years, so many of them took place while the Vice President was still the governor. And we have an EPA administrator who is touting what he calls the back to basics approach and relying on states to lead on environmental enforcement. I do think there’s an important question to be asked about how realistic or reasonable is it to rely on the state’s lead in these situations.”

These are all reasonable questions. In the end, though, it’s well worth noting one more time: the Surfrider lawsuit isn’t seeking a change to EPA or CWA regulations, or any sort of radical new approach. The plaintiffs are merely insisting that the existing regulations for chromium-6 and chromium be enforced—both for their own safety and that of the workers at US Steel, who are, in some cases, their friends and neighbors.

“We are not here to shut down this plant or any plants”, remarks Weinstock. “We want folks to follow the law. We think that economic development and industry can coexist with the natural environment—in many places it does. It just doesn’t seem to in Northwest Indiana.”