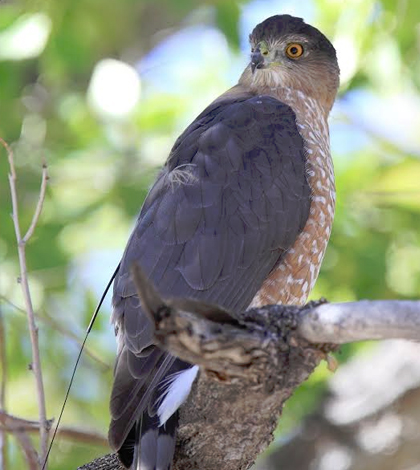 3-year-old adult female Cooper's Hawk that has been tagged with a radio transmitter. (Credit: Brian Millsap)

Using radio transmitters and a small team of people, Raptor Coordinator for the U.S. Fish and Wildlife Service and University of New Mexico doctoral candidate Brian Millsap has tracked the predatory birds of Albuquerque and found that their lives are even more fascinating and complex than many people realize.

The Cooper’s Hawks and Golden Eagles are both species with predatory lifestyles and reversed sexual dimorphism, where the females are much larger than the males. The difference in size between the females and males is just the beginning of the differences Brian has found in his predatory bird research.

Brian has found big differences in life milestones of female Cooper’s Hawks versus males. Whereas the females studied were all nesting at around one year of age, the males weren’t able to breed successfully until 2 to 3 years of age. “The males are responsible for most of the hunting during breeding season, and it takes time for them to develop sufficient hunting skills to support a female and her brood,” said Millsap. “The females, on the other hand, already have enough nesting skills at age one to start breeding. We were surprised to find all of our 1-year-old females were already successfully nesting.”

Males fighting over females is very common in many members of the animal kingdom, but for some predatory birds, such as Cooper’s Hawks, it is the females that fight over the males. Brian notes that the fights can be pretty vicious, too.

“Oftentimes, when a hawk is injured or killed from hitting power lines or a window, it’s a female who was in a dogfight with another female over a male. She will get so focused on defeating the other female, she won’t watch where she is going,” said Millsap. A radio transmitter mounted on the back of a 1-year-old female Cooper’s Hawk. (Credit: Brian Millsap)

In addition to fighting over the males, the females also evaluate the males’ performance every year. If the female feels the male isn’t providing her with enough food, she will find another male. “Older females tend to have the best territories and the best males,” Millsap notes.

The radio transmitters Brian uses to track Cooper’s Hawks last for about 2 to 3 years and have a range of about 2 miles. However, given the mountainous region where the hawks in the study live, it is possible to “lose” a bird by losing the signal. In those cases, Brian’s team will go to the top of a mountain, where the tracking range is 30 to 40 miles, and often they can pick up the signal again.

Although current radio transmitter and satellite tracking technology has enabled Brian and his team to learn a lot about Cooper’s Hawks and related Golden Eagles, Brian is eager to try some emerging technologies. “Right now we can’t actually look into hawk nests because, in many cases, they are on private property,” said Millsap. “We could possibly use drones, for example, to do that. Right now we can only evaluate the young by watching them fledge from the nests.”

Millsap and his team check the hawks’ location and status once a week. They typically track about 30 to 40 Cooper’s Hawks per year. About 150 Golden Eagles are being tracked by satellite.
Not only has Brian and his team learned a great deal about Cooper’s Hawks during his multi-year doctoral project, they were surprised and pleased to find that the residents of Albuquerque have embraced the Cooper’s Hawks as well.

“When we’re out there working with the hawks, it’s not uncommon for a crowd to gather,” said Millsap. “We’ve really enjoyed introducing the residents to the Cooper’s Hawks and letting them discover how fascinating these birds really are.”