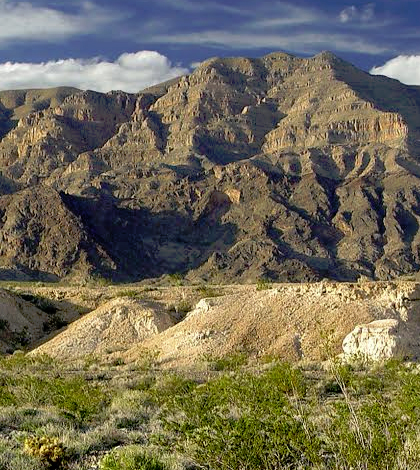 U.S. Geological Survey Geologist Kathleen Springer and a team of scientists have been slowly unraveling the narrative of these ancient sources of water, which have existed for thousands of years and are to this day an integral part of the desert environment. Springer has found that, over thousands of years, the desert wetlands and springs have expanded and contracted based on climate changes, dramatically shifting from a relatively barren environment to lush areas that attracted Colombian mammoths, sabre-toothed cats and other large animals, then back to barren again.

The shifts take many years, though they are abrupt relative to the hundred-thousand-year timescales which Springer and other scientists are currently investigating. She and others have been working on the Paleohydrology of Desert Wetlands Project under the USGS’s Climate and Land Use Change Research and Development Program.

The purpose of the project is to create temporal and stratigraphic models of the Tule Springs area in Las Vegas, a place so rich in prehistoric fossil records it is now preserved as the Tule Springs Fossil Beds National Monument. “I was the Senior Curator for San Bernardino County Museum back in 2003 to 2004, and my team and I were asked to assess the Tule Springs land, which was slated to go up for sale,” says Springer. “We found an absolute treasure trove of 500 fossil localities including mammoth remains. We were beyond excited. We told them, ‘Don’t sell the land!’”

Since then, Springer and her team have spent years painstakingly constructing a “scaffolding of the deposits” which shows not only physical location of the fossils but also where they are in time.

“Just because fossils are located next to each other, that doesn’t necessarily mean that they were together temporally,” Springer explains. “Geographical proximity doesn’t always equal temporal proximity.”

For example, she says, “We did not find deposits which showed mammoths and people existed at the same time, though those objects have been found near each other by archaeologists in the past.”

Constructing the scaffolding, or temporal and stratigraphic models for the fossils, is complex and involves many data pieces, including radiometric and luminescence dating techniques.

“The area was a very active site during the Big Dig in the 1960s, especially 1962 and 1963. It was also the site where Nobel Prize Winner Willard Libbey first tested radiocarbon dating,” says Springer. During the Big Dig, enormous trenches were dug to examine fossils. Ten trenches up to a mile long were dug to understand the complex stratigraphy.

In Springer’s work, the area studied is large, including some 25,000 acres with many fossil locations being recorded in painstaking geographical and chronological detail. “We were lucky the area had not been developed, as so many places in Las Vegas have as populations have grown,” Springer says. “Tule Springs is the last bastion of wetland deposits in the area.” In terms of research methods, Springer uses standard geological and stratigraphic methods. “What we do is very ‘boots on the ground,’” Springer says. “We visually examine the area, looking for changing lithologies which indicate discontinuities in the fossil record.”

Springer’s chronological data are robust, and are augmented with excellent snail dating, particularly gastropod species. Springer’s team relied on a radiocarbon expert to accurately date the snail fossils found. To reference fossils spatially, GPS locations and photo documents are used. These are recorded, organized and stored in a GIS database.

Google Earth is used directly in the field. Also, there are two published geologic maps published by the Nevada Bureau of Mines and Geology.

A technique called luminescence dating was also used to date sediments older than the practical limit of the radiocarbon method. “We’re interested in the last time the sediment saw light,” Springer says.

Samples are taken from the ground by using galvanized metal pipes with a metal cap on one end and a rubber cap on the other. The pipe is rammed into the ground with a mallet. The pipe fills up with sample and is capped. These samples are then taken back to the USGS lab.

“The radiocarbon data we get can only go back about 40,000 years,” Springer says. “Luminescence data can go back much further, about 250,000 years.”

Every unit collected which has fossils is dated, meaning the pipe samples are “bins of time” that show where and when there was water in the area, as well as animals and plants. They also show dynamic water level changes.

“Abrupt hiatuses punctuate our records, meaning there were strong temporal oscillations,” she says. Springer and her team found that Northern hemisphere climate proxy models match with the fossil evidence they have found of desert spring expansions and contractions, indicating a direct relationship between the two. When the Las Vegas desert spring climate was wet, Greenland ice core samples indicate it was cool there. When the desert springs had run dry, Greenland records indicated it was hot there.

The desert springs and wetlands of Las Vegas, furthermore, were found to be cyclic in both ancient and modern history, repeatedly having alternating wet and dry periods. Sometimes the dry periods would last a hundred years. But then the wetlands would emerge again.

“At this point in our multi-year investigation, we can just now start to ask and hopefully answer questions about what species reactions were to the wet and dry cycles,” Springer says. Some of the species likely migrated during the dry spells, such as mammoths and wolves, but it was clear that, during wet spells, large species returned to the desert springs and wetlands.

“We are also able to use the tooth enamel of large species and analyze the oxygen and carbon isotope geochemistry to look at water paleohydrology, and what the animals were eating,” she says. “There’s no other Pleistocene-era site like this one.”

Springer adds that every fossil they find has a chain-of-custody record. Each object has a number, plus each location has a number and fits into a spatial database. Records are also stored on acid-free paper in specialized cabinets. Geologic information and photographs are very important, and geology is digitally marked onto pictures for easy reference.

“We’re always using our mini iPad or iPhones with Google Earth out in the field,” Springer says. “It used to take weeks to do this type of work; now it takes about half the time, since there is now an app we can use to take geologic measurements.”

Springer is “so appreciative that the Bureau of Land Management allowed me to do this whole project. We were able to show the Las Vegas deposits, these groundwater discharge deposits, matched Greenland’s ice core records for climate changes. It was truly amazing,” she says. “We saw a highly responsive desert wetland ecosystem, basically a poster child for abrupt climate change. A harbinger for the future.”