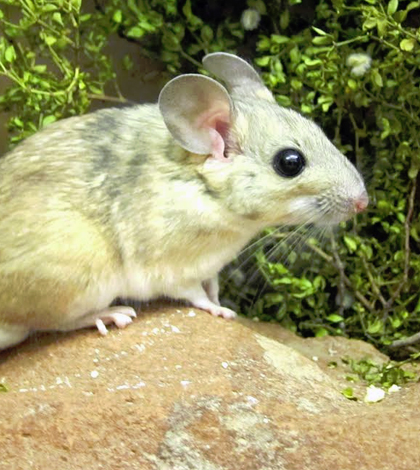 The effects of climate change aren’t just significant for Arctic species and for ocean-dwelling animals. Animals in environments that seem completely opposed to Arctic and marine conditions — arid inland environments with little water and only sparse, toxin-laden vegetation, are going to experience severe effects from climate change as well, according to a recent study conducted by a University of Utah team including Patrice Kurnath, a doctoral student in the university’s Biology Department.

Kurnath and her team studied the woodrat, a rodent the size of a chubby hamster, to see what the effects were as the temperature rose. The effects of a temperature rise on the woodrats were striking, to say the least.

“We were surprised,” Kurnath says. “There wasn’t a gradual change in effects on the woodrats. It looked like there was a definite tipping point temperature above which it was difficult for them to thrive.”

Kurnath’s woodrat study included monitoring of their food intake and body mass in two distinct temperature settings. They were given rabbit food in which the creosote level was gradually increased, to see how well their bodies did at processing natural toxins. Creosote is a toxin-containing plant that serves as a common natural food source for woodrats.

Equal numbers of males and females were used, with 20 rodents taking part in the study. After Kurnath and her team obtained a permit, the woodrats were collected from the wild using Sherman live traps, and were then taken to the lab for study. The first experiment involved metabolism cages from Lab Products, which had wire bottoms allowing for feces and urine collection, a feeder hood and carefully controlled temperatures. Half of the cages were kept at 21 degrees Celsius, and the other half were kept at 29 degrees Celsius. In the second experiment, the animals were kept in “shoebox” style containers, with water bottles added to the top, with their 24-hour intake value monitored. There were no wire bottoms to these cages, as no urine and feces collection was performed. In this experiment, varying amounts of creosote were added to the food to see how well the animals tolerated the same daily amount of creosote.

The animals were not permitted to die in the experiment, and were simply removed from the experiment if they were undergoing significant body mass loss, meaning a loss of 10 percent body mass or more. A Scout scale was used to weigh them to the hundredths place in terms of significant digits.

“Animals prefer to stop eating and die of starvation instead of eating food that they perceive has toxins at levels that are too high, in other words, food that’s poisonous,” Kurnath says. “We remove them before that happens.”

Unlike some rat studies where animals are sacrificed, Kurnath’s woodrats were not only kept alive and removed from the study if they lost significant body mass, they were also used in multiple experiments where possible. “Because they have to be collected from the wild, they’re expensive in terms of trapping time. They’re not like lab rats or mice that can be bought and are easy to obtain.”

The uniqueness of the woodrat is that it’s comfortable eating toxic creosote and it is also one of the few plant-eating rodents. “Most rodents eat seeds,” says Kurnath. “There are a few different types of woodrats and they eat a variety of plants that contain toxins such as terpenes and oxalate.”

Woodrats naturally live for about three years in the wild, and in the lab they can live up to four years. “Not that many people are studying woodrats, despite their unique ability to eat and thrive off toxic plants. Dr. Denise Dearing started our woodrat program, and we have been studying this question since about 2010. We’re also collaborating with some researchers from the Australia National University who are doing a similar type of study but with marsupials,” says Kurnath.
In the course of her team’s research, Kurnath has found that warmer temperatures from climate change will make it harder for woodrats to eat their preferred food, toxic plants.

“In the short term, they will be OK, but in the long term they may not be,” she says. “They may be forced to migrate to higher elevations.”

Not only will the woodrats’ environment change, the plants they eat will change as well. Those may produce more toxins, which may make them more difficult for the rats to consume.

In terms of future research efforts, Kurnath and her team would like to look at gene expressions in RNA of woodrat livers. How well the woodrats consume creosote is largely a function of their livers, and Kurnath foresees possibly doing sequencing in-house to get more detailed liver function information.

She would also like to track woodrats in the wild with embedded transmitters or GPS collars, though such equipment additions can be expensive.

“Woodrats at 21 or 29 degrees Celsius, as in our experiments, experience changes in thermoregulation and liver function. Their bodies work harder at the lower temperature and that means more liver processing and better toxin breakdown. The higher temperature makes it harder for them to break the toxins down,” Kurnath says.

She has also performed another experiment with the woodrats with a temperature between 21 and 29 degrees Celsius, expecting that the results would be somewhere in the middle. “But we got the same results with the middle and high temperature. That suggests there’s a tipping-point temperature, below which the woodrats can still thrive, but we would need to find that critical temperature to see what effect global warming changes are likely to have,” she says.