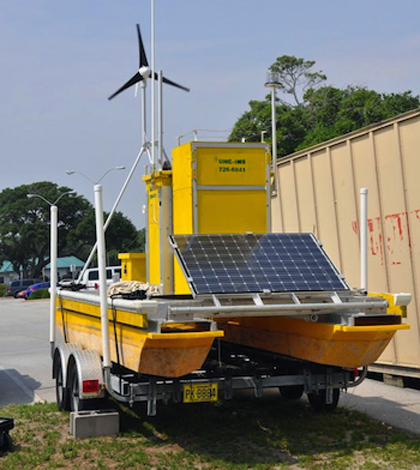 The University of North Carolina Institute Of Marine Sciences has a history with profiling platforms. UNC engineers and scientists have been building the research floaters for 10 years in a lab run by in Rick Luettich, director of the institute.

UNC scientists and engineers developed their own autonomous vertical profilers to take water quality readings throughout the water column.  They have three profilers  placed in the New and Neuse rivers. The profilers are designed to drop a payload of sensors to an allotted depth at set time intervals. Instruments attached take readings continuously on the way down and up.

Data collected by the profilers has been used to study water related issues such as infectious disease and sediment suspension.

UNC’s latest craft taps into previous experience, with reliability in mind. Previous profilers had some reliability and maintainability issues because of new, one-off technology, said Ryan Neve, an engineer at UNC who worked to build the new profiler platform. This time, engineers building the profiler used off-the-shelf technology and open source software.

Moored in the Neuse River, UNC’s new profiler looks like a small futuristic yellow pontoon boat. Riding up and down a smart-winch line, a YSI sonde collects water quality data. A pickup tube leading to an ISCO sampler and a LISST Streamside laser in-situ scattering and transmissometer enables sampling at any depth and analysis of sediment particles. “Based on water parameters, we can choose what depth to sample,” said Neve.

Atop the profiler, an RM Young weather station takes readings of wind speed and direction.

The heart of all of this technology is the Environmental Instrumentation Software Architecture that ties everything together. Designed for systems which require the integration of multiple distributed instruments, it was one of the most difficult parts of the build, said Neve. “Our schedule was very ambitious and there were a lot more man-hours in the programming than we expected,” he said.

Running the software is a custom computer system designed to operate the profiler. Computing power comes from a PC/104 Atom Processor running a Linux operating system. The EISA software is written in Python and Java.  Users can communicate with the profiler via 3G cellular telemetry. “As the data is collected by the platform, within a few seconds it’s at our office SQL database,” Neve said.

There is also Wi-Fi communication built into the profiler for local wireless connectivity.

An RM Young weather station takes readings of wind speed and direction from atop the platform (Credit: UNC Institute of Marine Sciences)

As part of the new design, UNC engineers wanted to prepare for any problems that could arise. Once left unattended, anything can happen to the platform, so communication with all the technology onboard was a top priority.

Winches on the previous generation of UNC’s autonomous profilers are controlled by software. Neve said that proved to be problematic at times, when crashing programs left winch lines totally unraveled or the winch motor bound up. “In software, when things crash, you have no idea what’s going to happen,” he said.

The new profiler has both software and hardware keeping the winch in check. There are limit switches and a rotary encoder, which act as fail safes for the profiler. Scientists and engineers using the profiler can see feedback from the winch motor and its rotating speed and communicate with the winch accordingly.

Multiple serial interfaces built into the new platform make it possible to communicate with each system individually. The university’s new software allows researchers to activate the platform’s sampler or change a setting on the sonde remotely from a smartphone or computer.

The platform’s computer is programed to save and buffer data that does not transmit when the cellular signal drops. Once the antenna is back in range, data collected during the outage automatically uploads to the UNC office’s database.

The floating platform was designed to be stable and easily movable. Neve said that’s why the UNC-IMS build team decided to incorporate pontoons.  Housings for the ISCO sampler and computer system ensure the tech stays safe from the elements.

So far, reliability has surpassed that of the previous generations from the very first day of deployment. The software architecture used in the profiler is also being incorporated into a ferry-based surface water quality monitoring system.

Neve said the other UNC profilers will get the same technology treatment by late fall, while still keeping their platforms. He also plans to release the UNC-engineered software that controls the profiler as an open source program to aid other researchers.