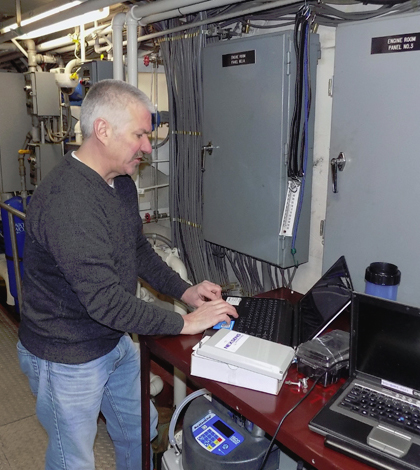 There are data buoys all through the Great Lakes. But despite that, as well as a recent surge in monitoring platforms throughout the water bodies following widely publicized algal blooms in Lake Erie and elsewhere, there are still understudied regions of the lakes. One of these is an area between Charlevoix, Mich. and Beaver Island, a tourist destination reached only by the Emerald Isle Ferry.

To fill the data gap for the 32-mile region, scientists at Central Michigan University have joined forces with the Beaver Island Boat Company to take advantage of the ferry’s path. They’ve installed equipment within the ship’s hull to monitor water quality as it makes its way to and from Beaver Island.

Data from the ongoing effort will illuminate dynamics at play in that part of Lake Michigan while also providing more measurements for researchers around the basin to consider.

“We know that lakes are warming and water quality is changing, but we don’t have a full picture of what other effects the rising temperatures will have,” said Don Uzarski, professor of biology and director of the Institute for Great Lakes Research at the university, in a statement. He is also director of the school’s Beaver Island Biological Station. “More data will help us make a comprehensive assessment of climate-related interactions and help track major ecosystem changes.”

The ferry-mounted monitoring station, which launched in early summer 2016, is the only one of its kind currently in the Great Lakes. That is owed both to its unique location inside the hull of a boat but also because of the large amount of data it is collecting with each 2-hour trip. The monitoring system, shown here, is the only one of its kind operating in the Great Lakes. (Credit: Central Michigan University)

“Increased levels of phosphorous and nitrogen are responsible for the nuisance algal blooms we see affecting city water systems more and more,” said Uzarski. “These have impacts on human health, the environment and the economy.”

Data from the sonde, as well as positional information provided by a Garmin GPS 19x HVS High Sensitivity Receiver, are recorded by a NexSens 5100-OEM Data Logger. The ethernet-equipped logger connects to the internet and pushes data to a NexSens WQData LIVE Web Datacenter for easy access for other Great Lakes scientists and the general public.

As for Uzarski and his team, plans are to use the data to model recent changes that have taken place in Lake Michigan and pass some of their findings on to decision makers. The hope is that science classrooms and research labs will also take a look at the data and use them in programming.

“Collaboration is an important part of research,” said Uzarski.