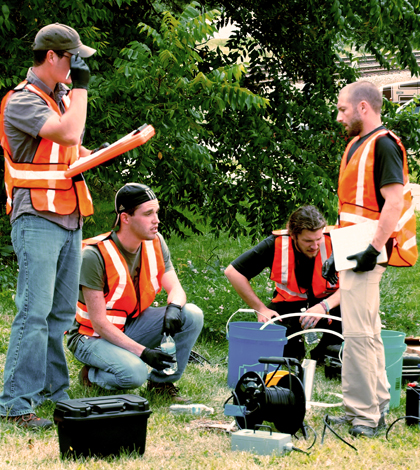 The Hydrogeology Field Course at Western Michigan University is one of the few such courses available in the United States. It aims to train students on the equipment involved in field work like collecting measurements, keeping records and filing reports.

“We provide students with a capstone opportunity to get a vocational, or applied, portion of training that they didn’t get in the classroom,” said Tom Howe, director of the field course. “It helps make them employable by providing that experience to them.”

Howe says that a number of students have gone on to work for government agencies including the U.S. EPA and U.S. Geological Survey, or have gained positions as staff geologists at environmental consulting firms.

“They’re going in and, right off the bat, they’re doing the things we taught them to do,” said Howe.

The six-week summer course is taught at the Asylum Lake Preserve, which is preserved as a recreation and research area under an agreement between the City of Kalamazoo and Western Michigan University. It involves an intensive training on monitoring gear, including handheld meters and sondes, soil samplers and groundwater pumps, like a Proactive Stainless Steel Hurricane XL Pump. “With the Hurricane, we’re usually training students to do low-flow sampling, running into something with a flow cell, where we need to control the flow,” said Howe. “That’s where we use YSIs (sondes) to monitor things like temperature, pH, conductivity, ORP and turbidity. And also dissolved oxygen.”

The field course uses several Proactive pumps, says Howe, but he got the Hurricane XL because there was a need for a high-quality, submersible pump with minimal maintenance concerns. One of the features he likes is how easy it is to swap out motors when the time comes.

“I haven’t seen another stainless (pump) where you can just unscrew it, put the new motor in there and then turn it on,” said Howe.

The course not only educates college students, but it also trains industry professionals in hazard response situations. Howe says that the Hazardous Waste Operations and Emergency Response unit of the course is always packed with both students and pros. The course also gets international students, says Howe, and has taught pupils from Denmark, Japan, Norway and Peru, among other countries.