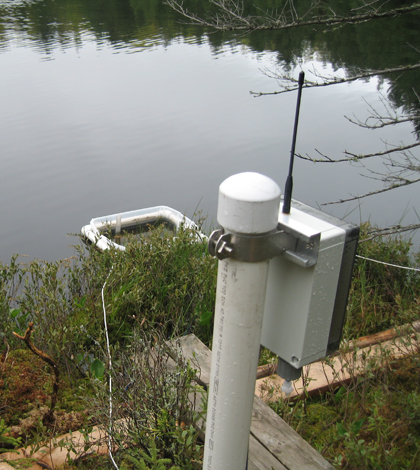 In a 7,000-square-kilometer swath of land across northern Wisconsin and Michigan, soggy peatlands sequester more carbon than the rest of the region’s land cover types combined.

But climate models for the region suggest that changes to the water cycle may be on the way that could unlock that carbon, releasing it into the atmosphere where it would feed back into global warming processes.

To get a better handle on the water cycle in the peatland systems and how they might respond to climate change, a research collaborative has developed and installed a pioneering wireless wetland monitoring network at a Wisconsin peatland site. The continuous data from the network will let researchers develop detailed water budgets for the site while helping calibrate and validate models used elsewhere.

Wetlands cover 20 percent of the Northern Highland Lake District in northern Wisconsin and Michigan’s Upper Peninsula, yet hold more than twice as much carbon as the district’s forests and upland soils.

The carbon remains locked up in the peat because the high water tables keep the organic mater saturated, slowing decomposition. But climate models downscaled to the Upper Great Lakes region predict greater fluctuations between periods of heavy rain and extended dry-out.

Those dry periods could lower the water table, exposing the peat to atmospheric oxygen and accelerating decomposition that releases carbon dioxide. And the intense rain events could flush carbon-rich waters from the wetlands into open waters to the same gas-releasing effect.

“If the hydrology changes, that carbon could be mobilized,” said Carl Watras, a research scientist with the Wisconsin Department of Natural Resources. “That would then exacerbate the CO2-driven warming problem that we are currently going through.”

To get a better understanding what drives fluctuations in wetland water tables and how that might be linked to the carbon cycle, researchers from the DNR and University of Wisconsin have developed the Wisconsin Wetland Wireless Observatory in the Trout Lake watershed. Water level sensors play an important role in the network. Several installed in wells throughout a section of peatland measure the water table level. Another measures surface water level on a nearby pond. One more installed in a floating pan on the pond measures evaporation. The sensors log measurements every 30 minutes and the network wirelessly transmits data back to a base station computer.

Along with rainfall data from an on-site rain gauge, the network provides data that the researchers can use to put together water budgets for the peatlands and the open water that cover very fine time scales. Those kinds of analyses often rely on models, but the breadth of data from the wetland observatory will allow the researchers to empirically tease out the drivers of changes in the system. An instrumented peatland monitoring well, the rain gauge and a GLEON buoy moored on the wetland pond

Though the data will be valuable for understanding how the local system functions, the scientists working with the observatory are also hoping their work could play into climate change research on much larger scales.

For example, there is a hypothesis that climate change will bring an acceleration of the water cycle over time, causing both more evaporation and more precipitation on a global scale. That could be a difficult hypothesis to study, however, because calculating evaporation rates can be a challenge, especially in larger systems like Lake Michigan. But a smaller system like the one covered by the wetland observatory isn’t susceptible to quite so many variables. That could make it an ideal place to collect data and fine-tune the tools for calculating evaporation rates elsewhere.

“So we’re hoping to be able to make a small contribution to addressing those very large questions about the water cycle on both local and regional scales,” Watras said. “Hopefully, that will play into what’s likely to go on at a global scale.”