When Modeling Permafrost Carbon Release, It’s Best To Be Direct 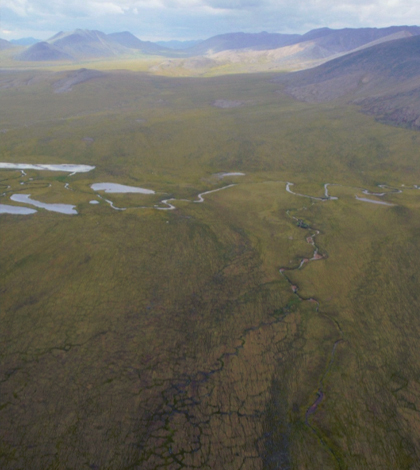 As global warming continues, a question that hangs over the Earth quite literally is what the contribution will be of all the carbon that is stored in permafrost in the Arctic, which includes regions in Alaska, Canada and Russia.

Charles Koven, a research scientist at the Lawrence Berkeley National Laboratory, along with a team of other scientists, has come up with a new way of modeling permafrost carbon using direct permafrost carbon observations instead of estimating carbon release based on complex Earth system models.

“Although typical Earth system models contain a wide range of atmospheric and land surface phenomena, they lack direct observations of permafrost soil carbon which could serve as useful modeling constraints,” Koven explains. In addition, the Earth system models do not contain some new soil carbon mapping information that has recently emerged. The model itself consists of three parts: 1) large scale soil carbon maps, which include where the soil carbon is and its depth; 2) decomposition dynamics, which include information on how quickly the soil decomposes and how carbon is released when soils thaw and 3) soil temperature data, which comes from climate models. The decomposition dynamics piece is based on incubation data of actual permafrost soil samples. Soil incubation data means that a soil sample is taken, held at a single temperature for a set amount of time stored in refrigeration, some from 1 year up to 10 years. The soil’s decomposition and carbon release behavior are noted.

The soil carbon information Koven has been using also has deliberately included not just surface soil data but also soil data at different depths, as the decomposition behavior is likely to be different at various depths. Carbon dioxide in these soils is measured in a closed vessel headspace and samples are weighed for evaluation. The incubation data gives an estimate of how much carbon is lost. The incubation temperatures are chosen based on knowledge of the soil and typical seasonal variations in temperature in the soil locations of interest. Knowledge includes where and when the soil goes above zero during typical seasonal shifts, which influences decomposition rates. The seasonal soil decomposition trend, including soil location and depth, is incorporated into the model, and then global effects are added to the local seasonal variations. The model was used to explore permafrost soil carbon release behavior up until the year 2100.

Koven used all the permafrost soil carbon data he was able to get. “There is not much field data currently available for Siberia, since it’s a rough environment, a difficult environment to get samples,” he explains. Soil pit which shows typical layers in permafrost soils, including an organic-rich surface layer and a wet, anoxic layer near the permafrost table. The depth to permafrost can be measured using the metal rod at right, by pushing it into the soil until it meets resistance from frozen soil. (Credit: Charles Koven)

“Basically, to advance our current model, we need more permafrost samples, particularly in Russia. We need more shovels in the ground,” Koven says. It is not realistic at this point to remotely monitor permafrost soil carbon by satellite, he says. And although automatic permafrost temperature sensors exist, they are currently mainly in Alaska and Canada, and there aren’t many.

In the future, Koven feels there needs to be more data gathered on the relationship between soil temperature and soil hydrology. “That is still a large unknown,” he says. “Another piece that needs to be incorporated is the role of plant growth and how that impacts permafrost carbon release.”

To summarize, Koven says the basic question they are trying to answer with their modeling work is, “How much carbon dioxide can people add to the environment and still be safe?” Current international negotiations have set 2 degrees of global warming as an upper boundary to avoid some of the worst effects of climate change. The question is, how much carbon dioxide could humans release but still be under the 2 degrees C temperature rise?

“About a trillion tons of carbon seems to be the carbon budget limit,” Koven says. Of that, about 40 billion tons could be from permafrost soil carbon release due to the 2 degrees of warming. But toward the end of the century, we may start to exceed that. “It looks like, by 2100 to 2300, carbon release will no longer be balanced by plant uptake,” he explains.

Given all the global warming changes that have happened already, even during a “safe” amount of carbon release, the prospect of “unsafe” levels of carbon is sobering at the very least.

Koven emphasizes, “When modeling carbon emissions and projected global warming, it’s important to incorporate permafrost soil carbon release and the feedback loop it creates. Otherwise we will overshoot our target and carbon dioxide concentrations will get too high.”