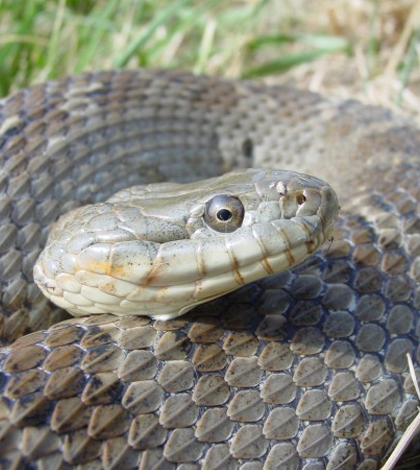 The Lake Erie watersnake is one formerly endangered species whose population recovered after it was able to supplement its native diet with an invasive species, the round goby. (Credit: Kent Bekker / U.S. Fish and Wildlife Service)

The comeback of the Lake Erie watersnake is a good example of benefits that predators can glean from the arrival of invasive species — round gobies in the snakes’ case. The invaders essentially provided a supplemental food source for the snakes that helped their populations rebound in the early 2000s.

But new research from Ohio State University finds that, to reap the most benefit from invasives, native predator species should only rely on them for nourishment when typical prey choices aren’t around. Scientists at the university completed a large-scale analysis of 109 studies on predator-prey interactions in the work and say that predator populations tended to increase after invasions by as much as 57 percent, but only when native prey species remained abundant.

And so scientists found that benefits to predator populations came when non-native prey sources provided only supplemental food sources.

“To me, the most interesting finding is that non-native species seem to really aid native predators when they serve as a supplemental food source,” said James Byers, a professor of ecology at the University of Georgia, and study co-author, in the release. “However, when the non-natives completely replace native prey, the predators do not do as well.” The round goby, an invasive species that served as prey to the formerly endangered Lake Erie watersnake. (Credit: Public Domain)

The two researchers hit a wall in approaching the work when they found that most studies out there had come at the subject by focusing on what happens to food webs when the invading species is a predator. In fact, some of the prey data they evaluated was included in studies only incidentally.

Both researchers agreed that understanding the effects of invasive species on food webs required a more balanced analysis that looked at both predator and prey species.

If the mud crabs develop a taste for the green ones, that development would underscore another concern the scientists bring up for interactions between predators and invading prey species.

“We want to caution that while we might see an increase in population abundance and density among some native predator species, that’s not always a good thing, either,” said Pintor, in the statement. “There could be unintended consequences for other native species.”

Full results of the study are published in the journal Ecology Letters.

Top image: The Lake Erie watersnake is one formerly endangered species whose population recovered after it was able to supplement its native diet with an invasive species, the round goby. (Credit: Kent Bekker / U.S. Fish and Wildlife Service)