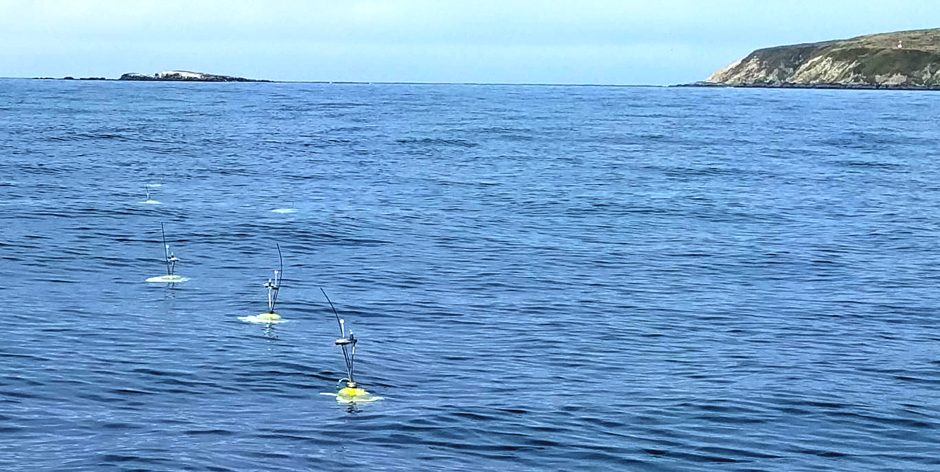 The robots at sea, just after deployment. (Photo by Grant Susner)

“There’s a real contrast between life on land and life in the water in terms of tracking organisms,” says Steven Morgan, Professor of Environmental Science and Policy at UC Davis, whose research is based at UC Davis’ Bodega Marine Lab. “We’re used to the idea of tracking our kids, or tracking mammals, but we can’t really do that with marine larvae. While we’re used to tracking adult creatures on land, in the water many adult creatures are sedentary. It’s their tiny larvae that do most of the traveling.”

Marine larvae are very small…certainly not good subjects for implanted tracking devices or radio collars. “Given that we can’t track marine larvae like we would track creatures on land, how do we find out their fates? One thing we can do is make some assumptions about how they travel. We can safely assume that they are transported by ocean currents,” says Morgan. “However, we have learned that they aren’t powerless: their activity in the water is genetically regulated behavior. That behavior determines how much time they spend in surface waters or in waters at the bottom of the ocean.”

Where the larvae are in the ocean water is very important, as the water will transport them differently depending on whether they are closer to the surface or the bottom. “Surface water flows away from the shore, and bottom water flows back to the shore,” Morgan explains. “While larvae can’t move independently of the current until a later stage in their development, when they are juveniles, they do have the ability to raise and lower themselves in the current, and due to the different current direction based on location in the water column, they, therefore, have some ability to influence their direction.”

Many marine creatures start as larvae, pass into a post-larval stage where they can swim to some degree and respond to chemical, acoustic, and/or polarized light signals, then turn into juveniles, where they are essentially the same as adults in terms of their autonomous behavior. “They find the adult habitat and then adopt the adult lifestyle,” says Morgan. “These stages occur in most types of marine life, such as fish and crabs.” 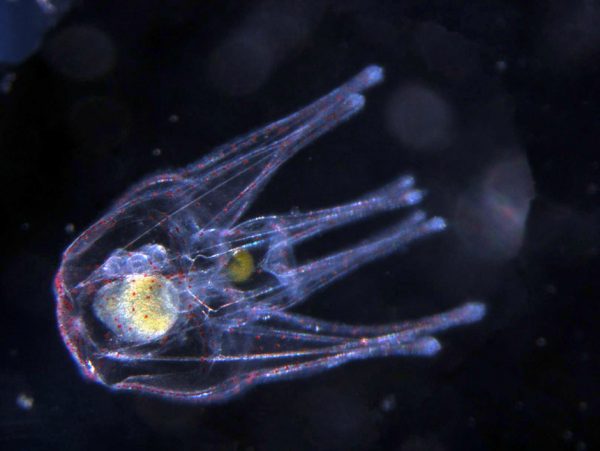 The larval stage is unique and distinct for these marine organisms. “There’s an amazing, alien-looking world of larvae not resembling their adult forms at all.”

In the lab, Morgan and his team learn about larval behavior by giving the larvae a stimulus, such as light, and see how they react. In the field, they relate the prevalence of different species of larvae in seaward-flowing surface currents and landward-flowing bottom currents to how far they occur from shore. Larvae of many species stay close to shore by spending most of their time in bottom currents, whereas larvae of other species travel far from shore by initially occurring in surface currents before returning to shore in bottom currents.

“We are trying to understand their pretty complex behaviors,” says Morgan. “In estuaries, for example with oyster larvae, we see that the larvae do not just passively get swept back into the ocean. Much more is happening. Somehow they get back to their home habitat so their life cycle can happen all over again. We are trying to understand the entirety of their lives.”

There is a distinction between the larval lifestyle compared to the lifestyle of the adult form. “Some larvae migrate away, then when they reach their post-larval form, they return to their previous home,” he explains. “We have lots of inferential information that tells us about their lifestyles. It can be hard for people to embrace some of the notions we have. The idea that tiny larvae are directing their lives in some ways can be difficult for people to grasp.”

Studies of tiny organisms like larvae, such as planktonic organisms, are by no means new. “Wooden ships in the 1800s carried silk stocking filters to catch and investigate planktonic species,” says Morgan. “Of course, the studies have advanced a lot since then.”

In terms of data gathered today, light, sea temperature and ocean depth can all affect larvae and can be related to where the larvae are in the water column. CTD instruments are used to measure conductivity, temperature and depth. An ADCP instrument which has eight probes is also used to measure how fast water is moving across the entire water column, which also affects larval behavior.

Since it is not possible to track individual larvae, Morgan relied on the assistance of Tom and Donna Wolcott of North Carolina State University at Raleigh to make robot larvae, which would enable them to simulate larval movement in real ocean currents. There were 50 larval robots built for the project, initially funded by NSF. “We programmed them with known larval behaviors and had replicates for behavioral groups. We arranged it so that there would be 12 robots in the same place at the same time,” Morgan explains.

The robot larvae were built out of casings of refurbished fire extinguishers. They are 21 centimeters tall, with 15 centimeters of antenna mast. “The reason these are acceptable larval simulations is because regardless of size, they would move at the same current speed. We outfitted them with instruments. They are not perfect simulations of larvae, of course, as you can’t perfectly emulate micro-turbulence. But they are adequate for our needs,” says Morgan.

The instrumentation on the robot larvae communicates their position to satellites. “We can get reports on their movements on our cell phones or computers,” Morgan mentions. “We can tell them to come to the surface. They have VHF and GPS so we can track them underwater also. It’s also possible to listen for them with hydrophones or find them with LED. The LED is essential at night.”

The robots can be easily scooped up with a dip net when needed. “We have them programmed to come up every four hours, surface, then descend quickly,” Morgan adds. “They can rise and descend because oil is pumped between an internal oil reservoir and outside tubing making an artificial swim bladder. Many organisms rise and descend using a similar bladder.”

The robot larvae also have an internal gyroscope with an external pinwheel that makes the robot spin. The spins are then translated into the speed that it is moving. The robot larvae are recording salinity, temperature and depth, and profiling the structure of the water column. In addition, they have a dongle on a toggle switch. “When it touches the bottom, the robot is programmed to swim up two meters,” says Morgan.

While the larvae can control their depth in the water column, the post-larvae can also use chemical signals to determine where to go. “If there is a flood tide, for example, they know to swim down,” Morgan notes.

“We have been experimentally demonstrating that larval behavior is effective for helping them move and complete their life cycles,” says Morgan. “In the work I have done with John Largier, we have shown that we can use robots to demonstrate what we thought was happening in terms of larval behavior. We have also been able to group behaviors to emulate real species. The larvae only show seven main behaviors.” 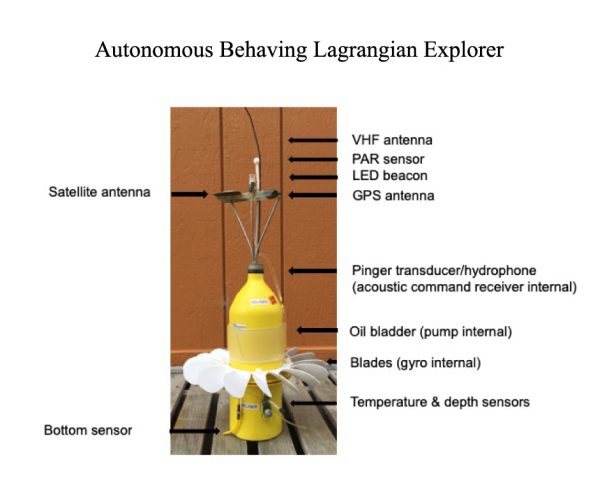 A labeled diagram of the ABLE. (Photo by Steven Morgan)

While they have been able to document onshore/offshore larval behavior, they do not know how far larvae are being transported along the shore.

“We also have used different, indirect approaches to study larval behavior, such as chemical tracking and genetic testing. Genetics has become more popular as the techniques have become more powerful,” says Morgan. “However, there are limits, since you can’t sample all populations. There’s a bit of a needle in a haystack problem.”

Chemical tracking consists of using water chemistry and natural elemental markings in organisms. “Fish ear bones have daily growth rings,” says Morgan. “We can use a laser to go from the start to the end of the bone growth and see its composition. From that, we can make inferences about where it has been.”

Morgan has been a professor at UC Davis for 20 years. Previously, he was a professor at Stony Brook University. In his time at Bodega Marine Lab, Morgan has been pleased with how the larval behaviors have been shown to be correctly captured by the robots they have developed. “We have also been surprised at how tightly clustered larvae stay if they have the same behavior,” he says. “This summer, we plan to emulate dispersal of real species.” Morgan also specifically acknowledges the excellent work of his doctoral student, Connor Dibble, in the larval project.

Morgan got into the phenomenon of larval transportation when he discovered that larvae and adults lead very different lives and that they can look completely unlike each other. “Their entire life cycle is very interesting and more complicated than many people realize. Knowing about their whole life cycle gives us a better management perspective,” says Morgan. “Typically, people study the ocean currents or study the adult organisms. But if you do that, you are only capturing half of their life cycle. We are trying to look at interdisciplinary fields to get the whole life cycle.”

The robot larvae have a few limitations: they have a three-week battery life, and they can beach themselves if there is a programming error.

“This is a really challenging system to understand,” says Morgan. “But with each technological breakthrough, our understanding is improved. We are currently working on difficult questions, such as how larvae connect different populations. We are also looking at the effects of climate change. It’s not something that can be modeled only by looking at the physics involved.”