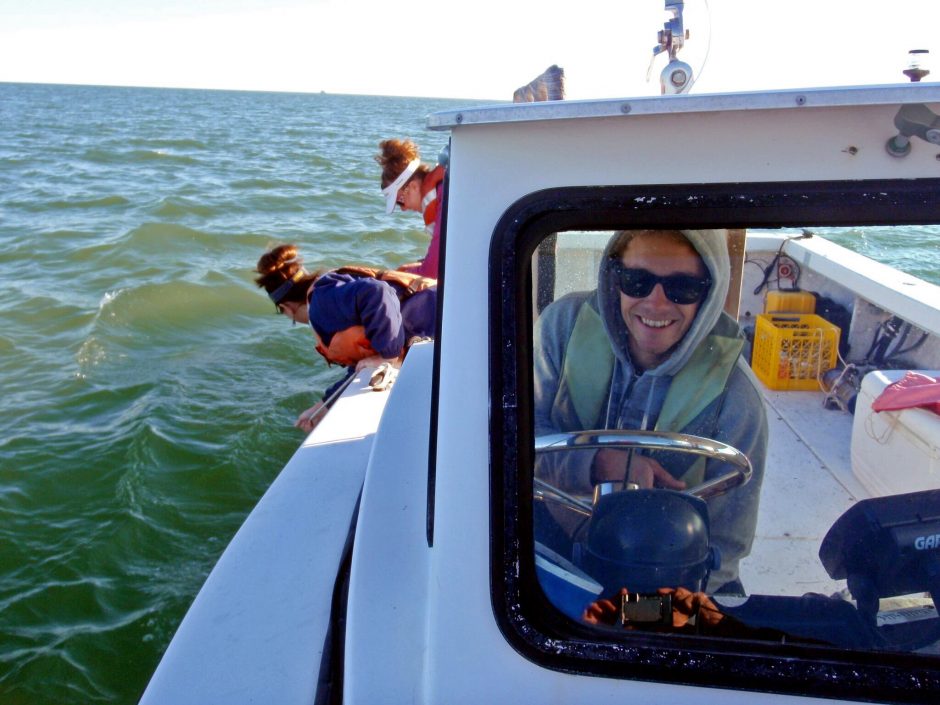 Ed Buskey, Professor of University of Texas Department of Marine Science and Research Coordinator for Mission-Aransas National Estuarine Research Reserve (NERR), has been there since the beginning. The beginning of the NERR, that is, in 2006. “Mission-Aransas NERR has several distinctions: it’s the only NERR in Texas, it’s the third largest NERR and it’s also the only one west of the Mississippi in the Gulf of Mexico,” he explains. “We also are the winter feeding ground for the last wild flock of whooping cranes in North America.”

In some ways, Mission-Aransas is like the other 29 NERRS all over the country. They too follow the System Wide Monitoring Program (SWMP) protocols that are standard among the NERR system. “Our technicians get cross-trained on the equipment and data gathering, which makes for a really strong data set,” says Buskey. Like the other NERRS, Mission-Aransas uses sondes for gathering water quality data. “We had all YSI 6600 sondes and we have been gradually swapping them out for the newer EXO2 sondes. I’d say we’ve still got about half 6600, half EXO2 sondes right now,” adds Buskey. Mission-Aransas NERR equipment is being upgraded, thanks to a grant from the EPA, through the Coastal Bend Bays and Estuaries Program. “Everything will be linked up to a satellite now, so if anything happens to our field monitors we will still have access to our data,” Buskey explains.  “The satellite data linkage can be critical. When Hurricane Harvey came through, two of our monitoring stations were destroyed. We also lost our research pier. Thanks to the satellite, however, we retained our data.” It turned out to be a notable day. “Our anemometer got up to 127 miles per hour!” Buskey recalls.

In addition to the SWMP data collection, Mission-Aransas NERR also performs some monitoring not all NERRS perform. “We monitor for plankton and for Harmful Algal Blooms (HABs),” says Buskey. Monitoring for HABs is done by Lisa Campbell of Texas A&M University and by NERR staff. Campbell uses an Imaging FlowCytobot, which was located on our research pier in the ship channel. Water is continuously sampled for HAB organisms. HAB monitoring also consists of regular sample collections throughout the NERR and analysis of these water samples using a FlowCam. Both the Imaging FlowCytobot and the FlowCam take pictures of every planktonic organism that passes through and automatically identifies HAB species. Karenia brevis, associated with red tide phenomena, are noted with particular interest. K. brevis is known to be connected to human health problems. Its toxins are released into an aerosol, which can cause watery eyes in humans as well as creating respiratory problems, or making existing respiratory problems worse. Mission-Aransas NERR participates in the HAB network of the Texas Coast. HAB especially are a concern along the coast of the Gulf of Mexico and inside the NERR. Buskey notes that a level of 100-200 cells of K. brevis per milliliter of water is enough to cause fish kills. Such levels are significantly higher than normal; a normal concentration of K. brevis might be just a few cells per milliliter. The HAB equipment can accurately measure down to one cell per milliliter.

“An important concern we have is brevetoxins from K. brevis,” says Buskey. “They’re in algal cells that are very fragile. The cells can burst and release ichthyotoxins, which can kill large amounts of fish. Local crews have had to physically clean beaches of the fish, there have been so many dead. Some animals attempting to prey on the fish, such as coyotes, are sometimes killed by the toxins as well.” When the Mission-Aransas team detects high levels of K. brevis, they warn people in the neighboring communities not to eat the fish or shellfish by notifying state agencies. When red tides do occur, fish close to shore are more greatly impacted than fish that dwell far out into the ocean. “King mackerel and red snapper live further out, so those are species that don’t tend to get affected as much by red tides,” says Buskey.

Outbreaks of HABs are relatively rare, however. Most of the time, Mission-Aransas NERR is a good place for sport fishing: red drum, speckled trout and southern flounder are favorites.

“Water is a precious commodity here,” Buskey notes. “Most of the area is drought susceptible.” One of the areas that doesn’t get much fresh water is Laguna Madre, a hyper saline lagoon. Due to the high salt content, few oysters or blue crabs live there. However, it’s also one of the more productive fisheries for black drum.

In addition to boasting some high quality fishing, Mission-Aransas has some other very special wildlife: endangered whooping cranes. “We are the winter home for the last wild flock in the U.S.,” says Buskey. “We have about 300 to 400 birds. They’re very impressive. They’re the tallest bird in North America at five feet tall.”  The bird count is typically done in the winter, though the winter is typically mild in this subtropical area. Every five or ten years, however, there is a hard freeze. “We have black mangroves and marsh grass areas. The cranes like the marsh grass areas especially. That’s where they find blue crabs, one of their favorite foods,” Buskey says. Though blue crab populations have been dropping, whooping crane numbers have not yet been affected. Red drum, who also like blue crabs, have also been increasing in number at Mission-Aransas NERR.

Not only the wildlife populations have been changing. Over time, not as much freshwater has been going back into the bay. Mustang Island has been developed, as have other barrier islands. Padre Island, however, has been designated a national seashore. “There is still a lot of pristine habitat in this area,” Buskey notes.

Mission-Aransas NERR is managed by twenty two permanent full and part-time staff and a lot of volunteers. The NERR is also partnered with the University of Texas Marine Science Institute. The Marine Science Institute boasts 15 faculty and about 30 graduate students many of whom carry out research in the NERR. The NERR research staff typically goes out every two weeks to take environmental samples and recalibrate instruments. There are typically five to ten graduate students involved in research at the NERR. The Semester by the Sea program typically involves about 20 undergraduate students. Another special program is the Animal Rehabilitation Keep (ARK) which involves rehabilitating marine birds and turtles that need a bit of extra help due to a variety of circumstances, such as a spell of cold weather. “Sometimes turtles can get stunned because of a cold weather snap, but they are fine once we warm them up a bit. We have had as many as 200 stunned turtles,” explains Buskey. “We’ve also assisted injured brown pelicans, cormorants and other sea birds.” Citizen scientists from Corpus Christi, Texas A&M and various area high schools also conduct water monitoring near Rockport.

In his many years at Mission-Aransas NERR, Buskey has seen the “tropicalization” that has been occurring since about 1989. “We’ve been seeing tropical species spreading north, like black mangroves,” he says. There have also been more severe droughts and changes in rainfall patterns, generally understood to be effects of global warming. There has also been more traffic of oil tankers in the area due to an increase in oil production in South Texas. “That’s another distinction of Mission-Aransas NERR,” Buskey observes. “We’re the only NERR with oil and natural gas production.” Oil was discovered prior to the NERR designation. Another interesting fact about the NERR is it takes a whole year for water replacement time—a relatively long residence time. Residence time for water in most estuaries takes weeks to months. Extra nutrients also arrive at the NERR from the Mississippi River by way of currents in the Gulf of Mexico. Because of the long residence time, the nutrients stay in the system a long time, stabilizing the system and making it steadily productive. “It’s a very productive system,” says Buskey.

In his many years at Mission-Aransas, Buskey has participated in many applied research efforts and management decisions. “It’s been great to work on just one NERR for this many years,” he says. “It makes it easier to understand what an event means when you have such a good understanding of the baseline of a system. I’ve enjoyed the practical management impact of the work I’ve done here, the practical research we do here that is used to make environmental management decisions. I especially have enjoyed the national NERR meetings, and meeting all the dedicated people who work in the NERR system. It’s especially great to see all the enthusiastic young people who are coming up. It makes me feel good about the future.”