Wildfires May Pollute Water Supplies on a Warming Planet 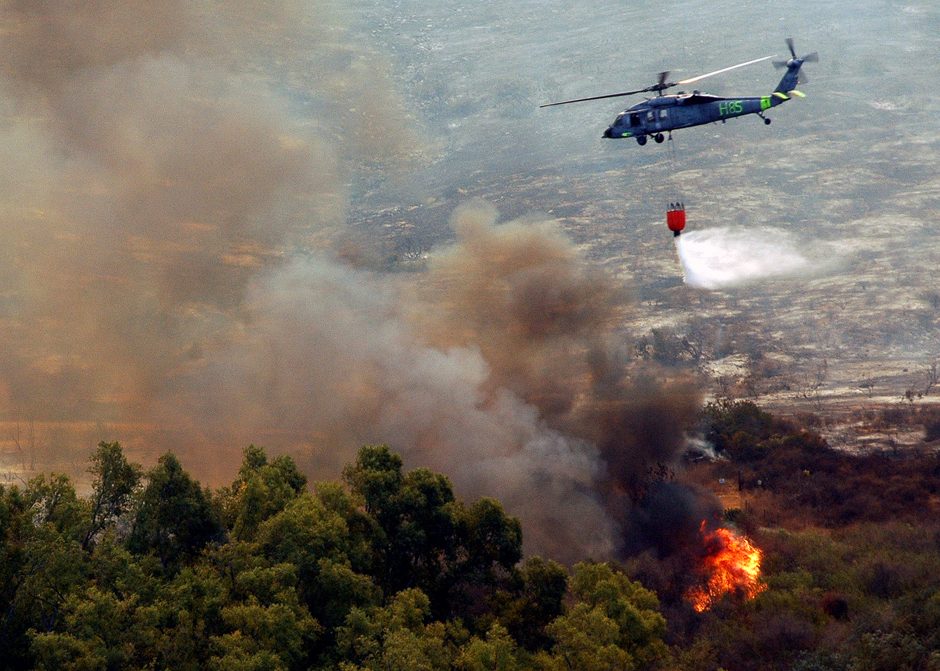 The US Navy drops water on a wildfire. (Credit: Chris Fahey [Public domain])

As wildfires are burning hotter, larger, and more often thanks to our warming climate, they are becoming more destructive and leaving more contaminants, debris, and runoff in their path. Researchers and policymakers are working to identify threats from wildfires to drinking water supplies, and Colorado-based US Geological Survey (USGS) scientist Sheila Murphy spoke to EM about some of the effects wildfire has on drinking water, and how experts might evaluate the risks.

“The main changes that happen after you burn a forest is that you’re losing the vegetation; so you don’t have plants using the precipitation that’s falling as rain,” explains Murphy. “You also change the soil surface so that it becomes hydrophobic, or ‘water hating,’ so when it rains water runs quickly off the surface rather than slowly soaking in. This water carries wildfire ash, exposed soil, and other sediment like mine waste for example, into waterways. So when you have a rainstorm that has a certain intensity, you can have severe water quality problems, because the soil and vegetation are no longer there to act as a filter and a sponge as they normally do, and anything from the surface runs straight off into water supplies.”

Ms. Murphy’s research has focused on trying to capture the storm runoff from these kinds of rain events.

“For example, the Fourmile Canyon Fire happened in September, and there weren’t really any major water quality impacts until the following July,” details Ms. Murphy. “It’s a little bit like a ticking time bomb in that you need a certain level of storm in order to carry that debris into waterways. My aim is to identify the type of rain event you need in order to generate water quality problems after a fire.”

To a certain extent, the answer to this question depends on the fire itself.

It also matters what kind of fire it is—in that some wildfires are more likely to result in chemical contamination when it rains. 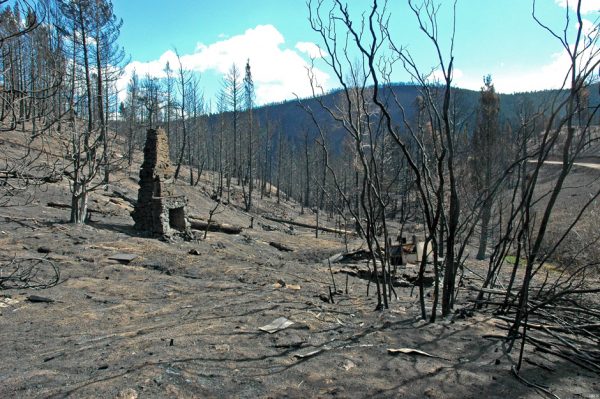 “That’s what some of my interest has been, in that the Fourmile Canyon Fire burned what had been a mining area,” states Murphy. “There had been gold mining from 1859 to about 1942 on and off, and that left a lot of debris in the watershed. The watershed had largely recovered, so it was hard to see in some areas that there had been mining, trees had grown over some of the waste. But the fire removed the trees, and when it rained much more water was going over the surface, and that led some of that abandoned mining waste to be carried into the streams. So your water quality impacts depend on the historical land use you have, and the possibility of re-mobilizing some waste.”

In fact, evidence seems to indicate that some big wildfires may be “unlocking” a host of other problems in forested watersheds.

“All across the West there are sites where there are mines that are no longer in operation, or perhaps the fires are in places affected by some other sort of industry,” remarks Murphy. “So I think it’s becoming more and more of a problem as the wildfires are becoming larger and more severe and the season is longer.”

Although it may seem that any rain after a wildfire is a good thing, it takes the right kind of rain events to help alleviate post-wildfire water quality problems in a forested watershed.

“You need precipitation for plants to grow, and that’s how your watershed recovers,” comments Murphy. “Snow and low-intensity rain do generally lead to vegetation growth and help your watershed begin to recover because they don’t typically lead to overland flow, which is what carries the ash to water bodies.”

The issue of whether there are any conditions that lead to the actual water table being affected is a bit trickier.

“That’s an interesting question because there isn’t that much work on how groundwater quality is affected by wildfires,” Ms. Murphy responds. “Fire changes the hydrological response in a couple of ways. One is, when it does rain harder you get these much quicker flood responses, but the other is, because you remove vegetation in those drier periods, you actually have a little more water in the stream that you used to because the vegetation isn’t there using it. But over time the vegetation returns, and it may start to use that water again. I’m not sure how long that effect would last.”

Furthermore, each fire has its own, unique footprint, and researching wildfires is inherently difficult and risky.

“People are starting to try to look at things more nationally,” Ms. Murphy indicates. “There’s some differences in, say, Arizona, where the monsoon season has an extreme impact, and there is pretty high-intensity precipitation, compared to, say, Glacier National Park, which doesn’t have such intense rainfall, so you can kind of think about differences in weather in different areas.”

Also (hopefully) coming in the field in the future: the ability to predict impairment from water quality.

“There are a lot of things you have to take into account,” states Ms. Murphy. “Steepness of the slope, the past land use history, the precipitation regime, how big your wildfire was, and what percentage of the watershed burned. I don’t think we’re there yet, but it’d be great if someday we were better able to give an idea of potential impact.”

In fact, a better understanding of potential impairment might help officials allocate resources in an emergency, as well as assist water providers that are at risk of fire in thinking about where the risks in their watersheds are, and how they can respond to them. 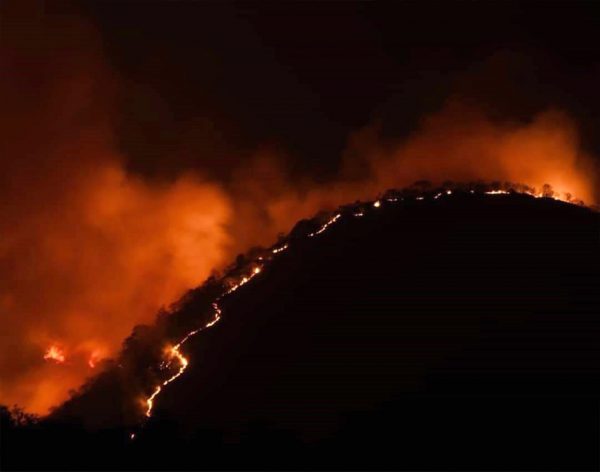 “That’s why we do it, right, so we can provide better information,” Ms. Murphy confirms. “One example is the Fourmile Canyon Fire. I’d worked with a water provider in the area to ask what sort of interest he had, and he mentioned he already had high levels of organic carbon in the spring, which is pretty common because when you have spring snowmelt and you have water moving through soils it brings with it organic carbon.”

The problem was that drinking water treatment plants that use chlorine often get some disinfection by-products which can be carcinogenic along with high levels of organic carbon.

“In our study, we were able to show that there really wasn’t a change in spring runoff,” remarks Ms. Murphy. “Instead, it was during the summer months that they would have very high levels of organic carbon. A takeaway from that might be, instead of being afraid of shutting off your intake during spring snowmelt, that might be a time to fill up a reservoir, and then later plan on shutting it when there’s the risk of high-intensity thunderstorm activity. We’re hoping our work can provide that sort of information, to guide water providers on what you can do about it when you do have a fire.”

For the study, the team was able to collect many contemporaneous samples and compare them to other, longer-term data.

“That fire happened in September 2010, at the end of a drought,” Murphy recalls. “It burned about 160 structures, so at the time it was the most expensive fire in Colorado history in terms of damage, although it has since been surpassed by other fires. But it was a big deal, and it was very close to our office here in Boulder, so we were able to do a pretty detailed study looking at the water quality response during storms and other times of the year. We did storm sampling and routine sampling upstream and downstream of the fire with automatic samplers. We were able to capture the storm events and demonstrate extremely high loads of sediment, organic carbon, nitrate, and manganese being moved to the stream, which can cause problems in water treatment.”

These kinds of results Murphy’s team saw around the Fourmile Canyon Fire also highlight the value of long-term monitoring research in an era when fires are simply going to be more common and more severe.

“I also worked on a fire that was in Rocky Mountain National Park called the Fern Lake Fire, which actually happened in the winter,” states Murphy. “That is pretty unusual at such a high elevation, but it was a pretty severe drought year, and the fire had started in October and went into January, and then eventually there were some snows that put the fire out. But every year there are fires, and studies are starting to suggest that wildfire season is getting longer.”