York River Buoy Launches, Adds To Networks Near And Far 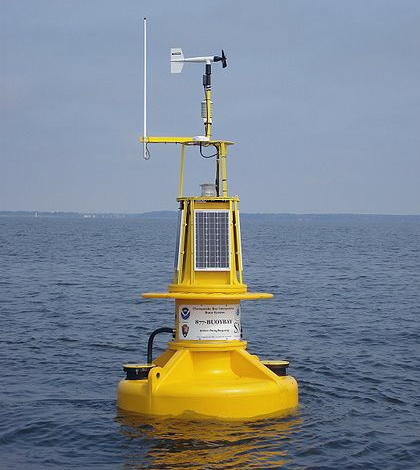 A new data buoy deployed at the mouth of the York River will provide researchers near and far with useful data on conditions there. The platform fills a critical gap in the Chesapeake Bay Interpretive Buoy System (CBIBS), and will also lend its data to local and national monitoring networks.

Crews with the Virginia Institute of Marine Science (VIMS) helped with the recent deployment, which took place Aug. 1. On hand were researchers from VIMS as well as state and local leaders and representatives from government agencies and environmental groups supporting the buoy.

The buoy is now broadcasting data from its deployment site in 30 feet of water at the mouth of the river, about 12 miles downstream from the VIMS campus in Gloucester Point. With its proximity to York River shipping traffic, fishing hotspots and the institute’s network of monitoring sites, its data are expected to see plenty of use. Boaters, anglers, scientists and others can access the data via a smartphone app, the web or by calling toll-free to 877-BUOY-BAY.

“ … The ability to collect real-time data and combine it with data from the York River observing system and the sentinel sites that are in place for looking at climate over time, that’s a real opportunity to fill a hole and get data that will be useful,” said Peyton Robertson, director at the Chesapeake Bay Office of the National Oceanic and Atmospheric Administration (NOAA). But data from the York River buoy will help more than scientists like Robertson who are completing studies locally. The platform links up with numerous networks, helping its data reach to investigators far away from Chesapeake Bay.

It is part of CBIBS, a baywide network of 10 observation buoys that mark points along the Captain John Smith Chesapeake National Historic Trail. These use cellular telemetry to report real-time data on wind speed, water and air temperature, wave height, salinity, dissolved oxygen, turbidity and chlorophyll levels. Data from the new platform will also assist the Chesapeake Bay National Estuarine Research Reserve at VIMS as well as the Virginia Estuarine and Coastal Observing System.

The data are further integrated into the Mid-Atlantic Regional Association Coastal Ocean Observing System, which stretches from Cape Cod to Cape Hatteras. From there, the York River buoy measurements will also be shared with the U.S. Integrated Ocean Observing System, a nationwide network of coastal observatories that monitor from Maine to Alaska and Hawaii, as well as the Great Lakes, Caribbean, and territories in the U.S. Pacific.

“ … These buoys are giving us a record of what is happening from here forward,” said Robertson. “A long-term data set that we can use to track climate and better serve the increase in recreational use of the Bay.”