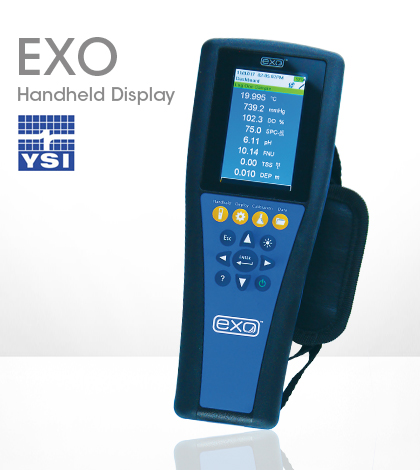 YSI has released a new EXO Handheld Display for use with its EXO Multi-Parameter Water Quality Sondes. The updated handheld integrates around four years of customer feedback for a solid device that adds a lot of utility and user-friendliness.

The appearance of the device has undergone a dramatic update, as YSI engineers opted to swap out the previous handheld’s look for the highly ergonomic Pro Series body that many customers love. Possibly more important, though, is that the body is ultra-durable and has proven itself in tough field applications over the years.

“These handhelds have been to the bottom of aeration tanks and dragged behind moving vehicles, yet kept on collecting quality data,” said Brandon Smith, YSI Sonde product manager. “Recognizing the strength of the Pro Series case, it was the perfect fit to provide a better Handheld solution for the EXO Sonde line.”

The waterproof body is IP67-rated, resistant to impacts and has a wet-mate connector. Inside, some notable hardware includes a GPS locator and a rechargeable lithium-ion battery. The GPS is a useful feature for environmental pros who collect high volumes of samples.

“Many of our users sample several sites in a day, so by allowing for GPS tagging of sites, it takes a lot of the guesswork out of remembering where a particular set of data was captured,” said Smith. “Understanding precisely where data are collected is critical for any regulatory projects, but also for monitoring applications where researchers may be spatially mapping the water quality of a lake, for example.” A rechargeable battery offered as an accessory to the first-generation EXO Handheld now comes standard, which lowers its environmental impact while upping the convenience for customers who didn’t look forward to swapping batteries. Now it’s possible to just plug the meter in after fieldwork. A full charge will power the meter for 48 hours of continuous use, Smith says, while it will run for about 20 hours if used to also power the sonde and sensors.

A good deal of the improvements many users will encounter come on the software side. There is a streamlined user interface, as well as a simplified keypad, and help menus that get new users up and running fast. These provide walkthroughs showing how to optimize use of the instrument.

“Forgot the proper way to calibrate turbidity? No problem. Need help setting up your sonde for a long-term deployment? We’ve got you covered with our help option,” said Smith. “We integrated four years of customer feedback into this latest iteration of the handheld and are proud of the result.”

The help menus are already a clear customer favorite, Smith says. There has been a lot of positive feedback for the calibration reminders integrated into the device’s software. The ability to directly export data from the meter to USB is another.

The EXO Handheld Display features a 3-year warranty. The lithium-ion battery pack is warrantied for 1 year, though users can expect the battery to hold up much longer with proper instrument care.

“We’re really excited to see this improved handheld launch, and the new display is only the first of many updates and extensions of the EXO platform to come,” said Smith.