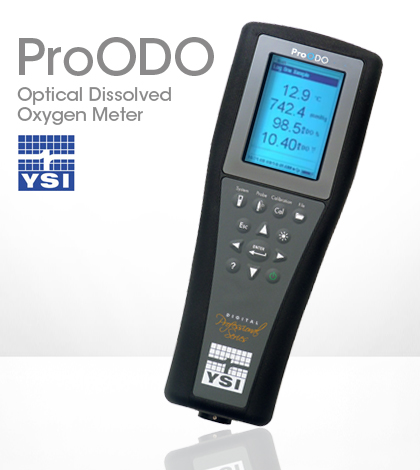 Dissolved oxygen meters have been serving limnologists and water managers for years with electrochemical probes that take time and skill to collect representative data.

The YSI ProODO was designed to improve on the faults of electrochemical probes. “The advantage is that the meter requires little expertise to get a good reading,” said Laura St. Pierre, YSI product manager.

The probe uses light instead of a chemical reaction to measure dissolved oxygen concentrations. The optical dissolved oxygen probe never needs a warm-up time and doesn’t consume oxygen. That means the probe doesn’t depend on flowing water and can deliver readings in stagnant water without stirring.

Consistent readings can be valuable, especially when measuring deep in the water column where it is physically difficult to stir a probe, St. Pierre said.  It’s also a good option for an organization that will share the meter among many people.

Each time, users must remove the old cap, fill a new cap with electrolyte solution, make sure there aren’t any bubbles, make sure the cathode and anode are clean and then, finally, install the new membrane cap.

The ProODO eliminates this process with a sensor cap replacement that is much simpler.  The old cap unscrews and the new cap screws onto the optical probe.  Then users have to enter a set of calibration coefficients into the meter, which come with each sensor cap kit, to ensure the most accurate results. Optical membrane caps last around 18 months before requiring replacement.

The optical probe sensor cap has a fluorescent dye layer on its surface. The meter calculates dissolved oxygen concentrations in water by equating the time it takes to quench the dye’s fluorescence on the tip of the probe to dissolved oxygen in the water.  “The lower the oxygen, the greater the signal strength of the probe,” said St. Pierre.

Another advantage the ProODO has over traditional electrochemical probes is less frequent calibration. The sensor will hold its calibration for up to eight months without drifting.

Since calibrations are saved in the probe, they can be interchanged between meters without calibration. This may be especially valuable to users transitioning between field use and laboratory biological oxygen demand measurements.

The ProODO is a computer-connectable device and stores as many as 5,000 data sets. Users can discretely sample and transfer data onto a personal computer for storage and processing through YSI’s free Data Manager Software.

The IP-67 rated meter is protected against dust intrusion and temporary water immersion. It has tough, military-style connectors between the probe and meter, which make for a durable weather tight connection.  The rubber-coated meter fits snugly in one’s hand and navigation is easy through its keypad.

Cable lengths for the ProODO can range from 1 meter to 100 meters.