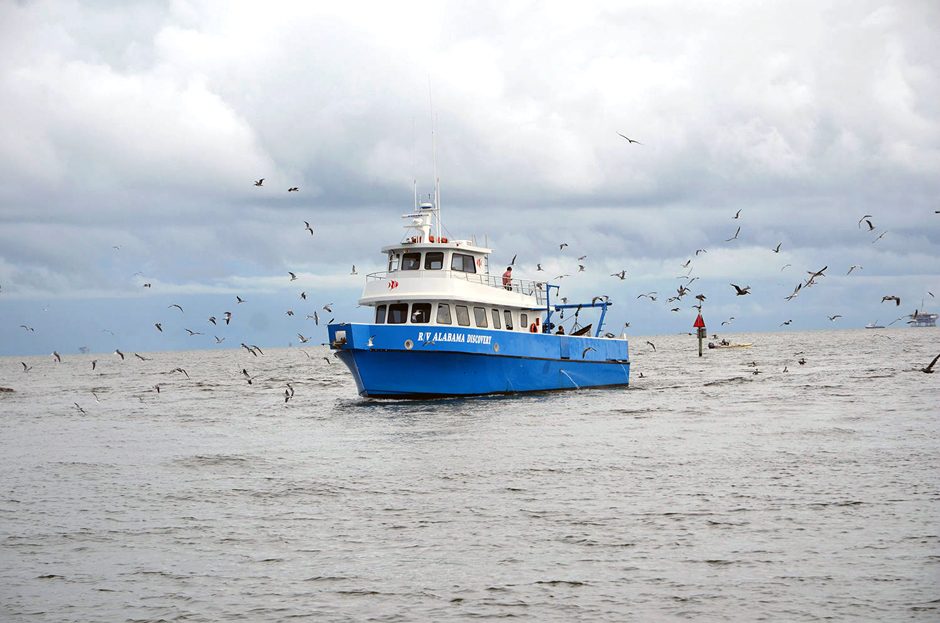 Named after French royalty, Dauphin Island sits on the Gulf of Mexico. It is an important stop for many migratory birds traveling from South America as well as many human visitors in search of beach scenery. It is also home to the Dauphin Island Sea Lab (DISL), which serves as the main educational and research center for marine science studies in Alabama. One of DISL’s most impressive gems is the Estuarium, a large aquarium where the public can view estuarine organisms native to Alabama which includes a 12,500 square foot exhibit hall. Aquatic life from the Mobile-Tensaw River Delta, Mobile Bay, the Barrier Islands and the Northern Gulf of Mexico are featured. Outside the aquarium is the Living Marsh Boardwalk, which looks over Mobile Bay.

The Mobile-Tensaw River Delta is Alabama’s largest wetland and is home to turtles, gar and American alligators. Mobile Bay has brackish water and is a habitat for blue crabs, stone crabs, horseshoe crabs, oysters, and flounder. Barrier Islands sports hermit crabs, and the Northern Gulf of Mexico supports octopi, lobsters, eels, seahorses, sharks, jellyfish and many others. The Rays of the Bay, an Estuarium exhibit opened in the mid-2000s, features indigenous Northern Gulf of Mexico and Mobile Bay skates and rays, including the Cownose ray and Southern stingray. The newest exhibit is Windows to the Sea, added to the exhibit hall space in 2018. “Windows to the Sea features a video wall for the public to explore a sargassum community and learn about changes in Earth’s history,” says Angela Levins, Public Relations Director at Dauphin Island Sea Lab. “Windows to the Sea also provides visitors with educational videos of programs on campus, research happenings on campus and topics of interest in the world of marine science. The exhibit gives the public a view of the sea outside of the four habitat focus areas.” 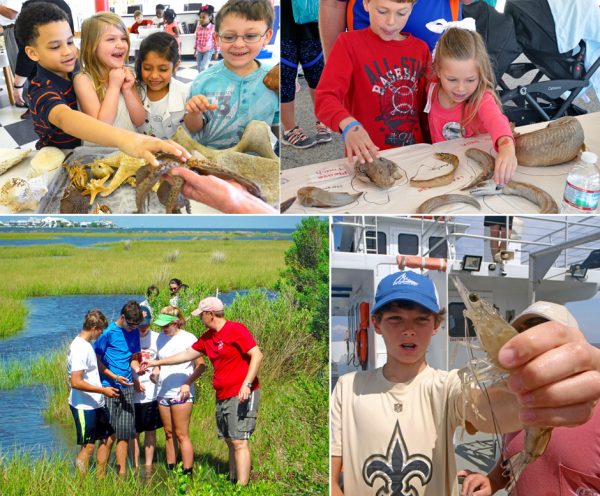 (top) Students get up close with preserved marine specimens during Discovery Day, the Dauphin Island Sea Lab’s annual open house. (top right) The BayMobile, the Lab’s traveling classroom, brings the marine world to classrooms and outreach events across the state of Alabama all year. In 2018, the BayMobile visited 30 schools in 8 Alabama counties. (bottom left) Discovery Hall Programs Marine Educator Greg Graeber teaches students about the importance of estuaries in the salt marsh on the north side of Dauphin Island. (bottom right) A Discovery Hall Programs student holds out a shrimp aboard the R/V Alabama Discovery. The research vessel is DISL’s 65-foot floating classroom used throughout the year. (All photos: Dauphin Island Sea Lab)

DISL also features a dolphin, manatee and whale stranding research facility, the Marine Mammal Research Center. “The Alabama Marine Mammal Stranding Network (ALMMSN) uses the center for necropsies and research. There is also the Manatee Sighting Network (MSN) on campus. Both programs are projects of Dr. Ruth Carmichael. The Manatee Sighting Network has a great focus in giving us a better understanding of manatee travel. There was a time it was believed that manatees were out of place in Alabama, however, through the manatee sightings we’ve discovered that manatees migrate to our area in warmer weather and then head back to Florida when the water cools down. MSN has used satellite tagging and citizen visuals,” says Levins. “A great paper just came out relating to a portion of this.”

Satellite tagging of manatees and public reports of manatee sightings can be found at: https://manatee.disl.org.

As Levins says, “Constant water monitoring is a central feature of Dauphin Island research.” Dauphin Island monitoring data provides many benefits, including a permanent record of changes in environmental indicators over time, support for research activities through the availability of consistent, high-quality data and potential for the public to track and learn about water quality status. Monitoring information includes user-friendly hydrographic data that is provided via a partnership with many entities, including the Mobile Bay National Estuary Program, Weeks Bay National Estuarine Research Reserve, the Alabama Department of Conservation, State Land Division, Coastal Program, and the Environmental Protection Agency’s Gulf of Mexico. “MyMobileBay.com is a great tool that offers real-time monitoring of our waters at several stations. It’s one of several areas of data we monitor,” says Levins. Find the publicly accessible monitoring data here. 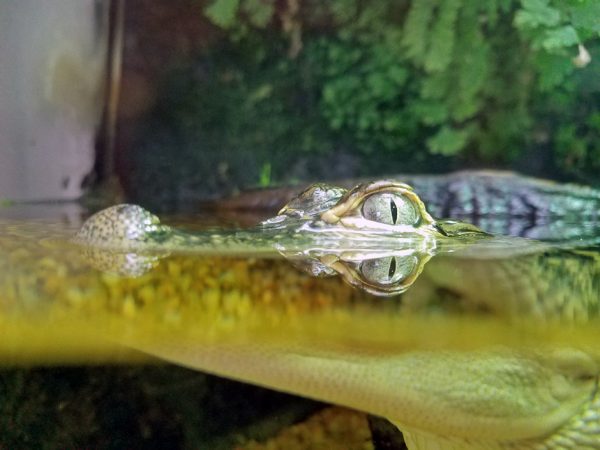 Alison Robertson, Senior Marine Scientist for DISL and Assistant Professor at the University of South Alabama, has HAB toxins as a primary research focus, looking at fate, transport and biodegradation of benthic HAB toxins as well as toxin effects on marine biota. She uses chemical tracers and signatures (toxins, lipids, proteins, stable isotopes) in bio-indicator species to make ecological risk assessments, as well as model toxin fate and reef food web relationships. She has led HAB toxin outbreak (poisoning) investigations and HAB rapid response efforts, as well as trained many in methods for exposure and toxicological assessment, analytical and bioassay detection of HABs and their toxins. These analyses remain an outreach focus for Robertson and her lab. One of Robertson’s big projects is CiguaPIRE.

Seagrass study and habitat restoration are also important topics of interest at DISL with Ken Heck leading the effort. His lab is focused on plant-animal interactions in coastal waters, with an emphasis on seagrass-dominated systems. Heck has also collaborated with colleagues in efforts to restore northern Gulf oyster reefs and seagrass meadows. He has been Research Director, Chief Scientist, Chair of University Programs, Associate Director of the Alabama Center for Estuarine Studies and Director of the Shelby Center for Ecosystem-Based Fisheries Management. He has also collaborated with post-doctoral scholars, technicians and graduate students, as well as mentoring more than 50 undergraduate interns. Alex Rodriguez, a graduate student working with Heck, won a SeaGrant prize for her work on using drones to monitor sea turtle grazing effects on seagrass. Heck has also been involved in the Deep Horizon oil spill study, which explored the incredible resilience of the Gulf of Mexico ecosystem to the oil spill, and also underscored the need for high-quality baseline environmental monitoring data. 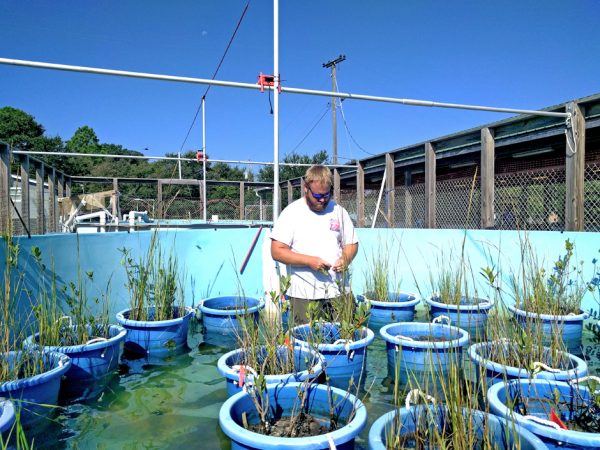 Sean Powers leads fisheries ecology at DISL. Fisheries ecology labs have a variety of projects, such as looking at red snapper on the reef during each season and monitoring growth rates. Red drum is also monitored.

Education on the island

In addition to monitoring work going on at DISL, there is also a great deal of educational outreach.

At DISL, Remotely Operated Vehicles (ROVs) are part of educational outreach, and a current class of middle, high school and other educators will spend time on DISL’s research vessels, see how they operate, talk about research potential, and even build a functioning ROV from circuit board up to get students interested in building, learning, developing skills and exploring the ocean.” Discovery Hall Programs (DHP) also incorporate lessons on drifters and how they are used in marine science,” Levins mentions. “One program that just received funding through the Alabama State Lands Division is a citizen science project. When they are on our R/V Alabama Discovery, volunteers from the community will join us to record details of species encountered during trawling to add to the understanding of Mobile Bay. Tina Miller-Way let me know they just received funding for this project.” 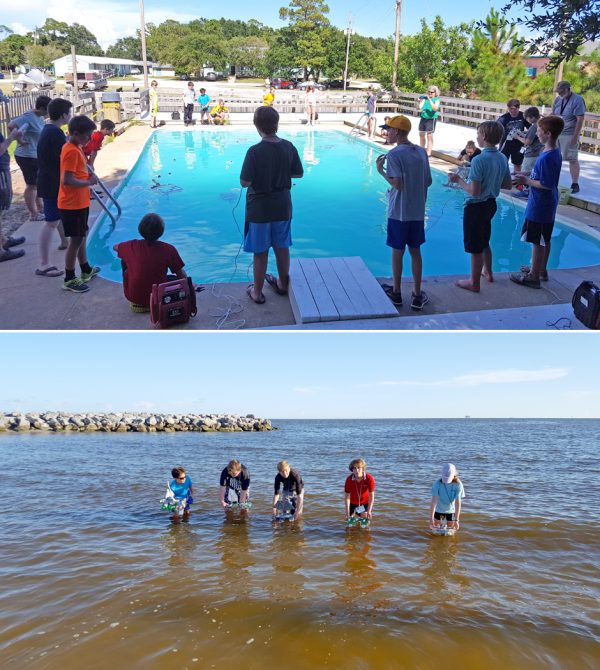 Tina Miller-Way, Chair of Discovery Hall Programs for Education and Outreach, uses her 20 plus years of experience at DISL to develop the K-12 marine science educational outreach programs. She shares marine science with teachers and students alike and has incorporated data gathering using YSI probes into her educational demonstrations. Her background includes a PhD from Louisiana State University, MS in Oceanography from Oregon State University and years of teaching at the University of Mobile and University of South Alabama. She is also Education Director for Mississippi-Alabama Sea Grant Consortium and serves on the Sea Grant Educators Network Board.

To keep abreast of the latest happenings at DISL, please see their Skimmer newsletter:  https://skimmer.disl.org/.