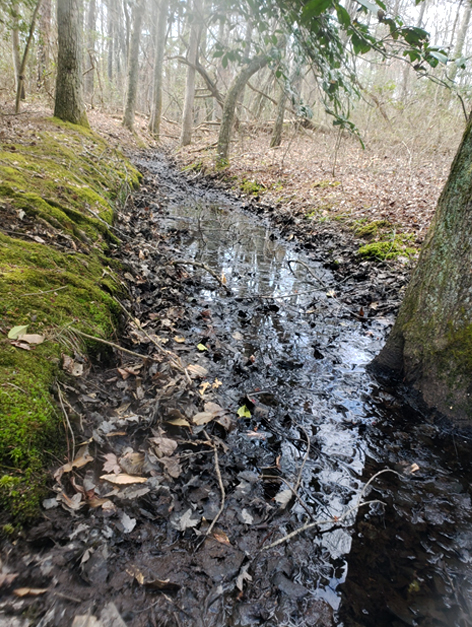 Small ephemeral stream on the Delmarva Peninsula on the Eastern Shore of Maryland. (Credit: Nate Jones)

An early aquatic science pioneer, Luna Leopold, said that “The health of our waters is the principal measure of how we live on the land.” Determining how the land impacts water quality, however, is complex. There must be an understanding of the flow of materials, organisms, and energy within our waters and how they are connected, or even whether they are connected. Enter the emerging field of aquatic systems connectivity.

Nate Jones, assistant professor of ecohydrology at the University of Alabama, and his colleagues explain in a recent paper that aquatic systems connectivity refers to “the flow of materials, organisms, and energy between ecosystems (or ecosystem components) and serves as a unifying concept for the study, management, and restoration of aquatic systems.” The idea involves interdisciplinary researchers of the aquatic science community collectively working to improve the connectivity of the physical, chemical, and biological functions of aquatic systems.  By using the aquatic systems connectivity framework for understanding water movement phenomena, Jones and others hope the information gathered can ultimately be used to improve downstream water quality.

“This aquatic systems connectivity framework is similar to other concepts like sustainability or resilience—these frameworks provide common ground for different disciplines to come together and work to address complex problems,” Jones… Click To Tweet

“It is important to operationally define ‘significant nexus’” said Jones.  “Attempting to do that exposed major gaps in our knowledge of how aquatic systems function and the connection of different system components.”

According to the Jones et al. paper (referenced above), there are a few ways to separate aquatic systems into system components so that they can be considered as discrete individual parts, yet with representation of flows of water and materials among those parts, and containing spatial scales of parts and their flows. Aquatic system parts can be organized hierarchically around watersheds and attached downstream flows of materials, energy, and water. Another useful idea for arranging aquatic system components is the “river continuum concept,” where the flow and processing of organic materials is organized in terms of headwater streams as they move into large rivers. There is also the “updated river corridor concept,” which includes horizontal and vertical flow exchanges in addition to downstream movement of energy and materials, scrutinizing the movements between hyporheic zones and flood plains. Still, other approaches include shifting the frame of reference from river corridor to watershed, dividing the landscape into discrete system components via biogeochemical reaction schemes or “boundary objects.”

“There is an individual wetland scale, regional scale, and continental scale,” said Jones. “We need to think of the ‘wetland scape’ and also the ‘freshwater ecosystem mosaic’—the large-scale functions of inland aquatic systems.” 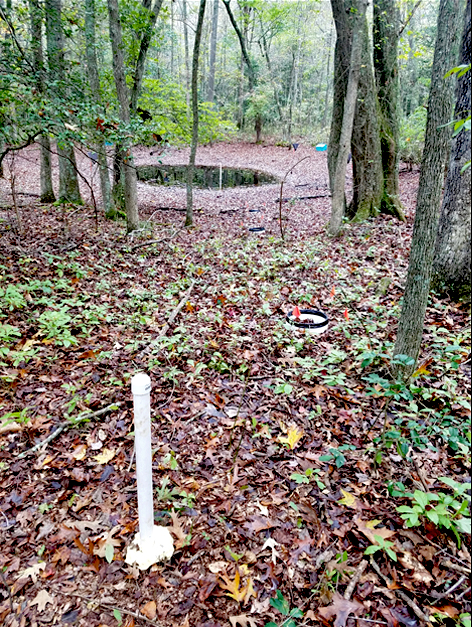 Geographically isolated wetland on the Delmarva Peninsula on the Eastern Shore of Maryland. (Credit: Nate Jones)

“Pacific salmon have been a good case study,” Jones mentions. “Flitcroft’s research has highlighted the need for ‘pan environment’ studies—gaining an understanding of not only upstream but also estuarine and marine habitats.”

The success of aquatic system connectivity studies relies on their ability to characterize and predict hydrologic, biogeochemical and biological flows between aquatic systems. A process-based grid-free hydrologic model is under development. Basin to region scales are important, and waters can act and connect differently due to a variety of factors.

“We’ve found that lakes, for example, can act as individual hydrologic units during drought, but when the water table is high, they can act as larger connected units,” explains Jones.

Jones and others have had some surprises in their research.

“Research through the Dry Rivers RCN (Research Coordination Network) is beginning to examine both spatial and temporal patterns in stream drying. The RCN consists of 20 to 30 scientists across the fields of ecology and hydrology. Surprisingly, in many parts of the country, our analyses are starting to see an increase in stream drying likely due to a combination of changes in both land use and climate,” Jones said.

Another study that shows the scope and utility of aquatic systems connectivity studies is the Aquatic Intermittency Effects on Microbiomes in the Streams (AIMS) study, funded by NSF. It involves three regions:  West (Idaho State), Great Plains (U. of Kansas, Kansas State, University of Oklahoma), and Southeast (U. of Alabama, Ole Miss, U. of Southern Mississippi). There are nine field sites. The study also explores the effects of stream drying. This is important because roughly half of streams dry up. In this study, Amy Burgin and other researchers have looked into the stream drying process, which has a microbiological component and a chemical component.

“There’s been more intermittent stream drying in recent times, and we want to know how that impacts water quality,” says Jones. “This has happened in the Southeast for sure. There are changing water patterns, and we think land use change and climate change are behind that.”

When asked to peer into the future of the field, Jones says, “Hydrologic connectivity will continue to be an important concept guiding research, regulatory, and management communities. There are still major points of uncertainty associated with small, upstream systems like non-perennial streams. While these streams are small, they make up the majority of our river miles and play an important role in the physical, chemical, and biological functions of our water resources.”