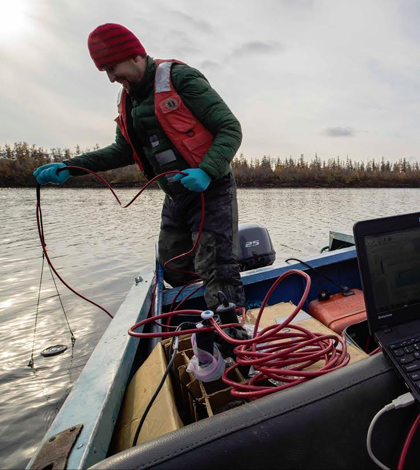 Black carbon created when vegetation or other organic matter burns is called biochar. Biochar is a very stable and effective means of storing carbon. It has even been proposed that biochar could be added to soil to make it more effective as a carbon sink. However, if biochar is released from the soil and carried away into the ocean, its decomposition in the water can cause carbon dioxide to be released to the atmosphere, contributing to the greenhouse gas emissions already warming the Earth.

Aron Stubbins, associate professor at the University of Georgia’s Skidaway Institute of Oceanography, has studied biochar as more and more of it is taken up from Arctic soil due to tundra thaw and ice melt and flows into the Arctic Ocean.

Biochar is partially comprised of condensed aromatic rings, or polyaromatic hydrocarbons (PAHs), which give the biochar its color. The condensed aromatic rings are formed at high temperature during the burning of organic matter, and they can be extracted from river water via Varian ppl resin in a separation technique called Solid Phase Extraction (SPE). The SPE isolates and concentrates the polyaromatic hydrocarbons, which are then eluted with methanol and dried down. The PAHs are oxidized at 180 degrees Celsius in a solution of nitric acid and each molecule is ultimately reduced to a single aromatic (benzene) ring with carboxylic groups attached. They are then separated from each other using an Ultra Performance Liquid Chromatography (UPLC) Acquity system by Waters. The resulting polycarboxylic acid molecular structures indicate how many aromatic rings were attached to the original aromatic ring, giving clues to the structure and source of the original molecule. The SPE and UPLC separation techniques are used to simplify the task of identifying the molecules that made up the original biochar. In addition to differences at distinct river discharge areas, Stubbins says there are also seasonal variations to consider. In the Arctic winter, water flows, but it is running under ice. This winter water is from groundwater, and it contains very little carbon.

“In spring, snow melts across the Arctic and flushes a lot of biochar into the water,” says Stubbins. The black carbon concentrations increase during spring, but after the spring there is significantly less carbon in the water. The science team also sample in summer and fall, but concentrate most of their sampling efforts on the big spring melt.

To determine biochar export, or how much biochar was being released into the Arctic Ocean via rivers, Stubbins and his team took the color measurements and put them into LOADEST software along with river flow data. In this way, it was possible for Stubbins to show the relationship between black carbon and river flow. The higher the river flow, the more black carbon was exported to the Arctic Ocean.

The most surprising thing these model calculations revealed was just how much black carbon was being exported. Stubbins says that “black carbon represents about 8 percent of the total organic carbon exported to the Arctic Ocean.” “Biochar is made when animal and plant materials burn. Biochar is thought to be very stable in soils, where about 10 percent of carbon is stored as black carbon,” Stubbins says. “However, this research shows black carbon can wash into rivers and our other work shows that once it goes into the water and sunlight hits it, the sunlight can dismantle the biochar molecular structure and break it down into carbon dioxide. A question we are trying to answer is: What happens to biochar after it reaches the coast? How much of the carbon gets converted to carbon dioxide by sunlight and how much is able to mix into the deep, dark waters of the ocean, where it is protected?”

Stubbins goes on to warn that soil carbon also becomes more vulnerable as thaw continues to happen and that the Arctic is warming faster than everywhere else. “All the global climate models are telling us so,” Stubbins says. “Also, the spring floods we see are predicted to become more intense as the climate continues to change.” Samples for the study have been collected for 10 years by the Arctic Great Rivers Observatory (AGRO), which collects samples at the mouths of the six largest Arctic rivers. Together, these six rivers drain around 50 percent of the Arctic landmass. As water flows from the land, it carries the signatures of the landscape and how it is changing. Just as a blood sample can tell us about a human’s health, a water sample can tell us about the health of the land it drains from. “Sampling at just these six sites provides a health check for the Arctic,” says Stubbins.

The current work used samples collected by the AGRO, which involves a large team of scientists. The project to look at black carbon in these samples involved collaborations with a global network of scientists. These included Robert Spencer from Florida State University; Jutta Niggemann and Thorsten Dittmar from the University of Oldenburg, Germany; Paul Mann from Northumbria University; Max R. Holmes from Woods Hole Research Center; and James McClelland from University of Texas’ Marine Science Institute.

In the future, Stubbins hopes to get more resilient equipment that can stand up to river flow conditions better. Remote sensors and satellite monitoring of water color could give more convenient insights into biochar levels. Also, he would like to get more of a handle on natural versus industrial sources of biochar, and carbon leaching from biochar.

In summary, Stubbins says, “Understanding the natural cycling of black carbon and biochar is of increasing significance. As global warming continues, more fires and higher river flow will occur in the Arctic disrupting these natural storage areas of global carbon. If the carbon stored in Arctic soils today makes it into the atmosphere, this will increase global warming. The Arctic may be far away, but our actions are driving Arctic temperatures higher and the changes there will affect all of us.”