Banking on a Wetland 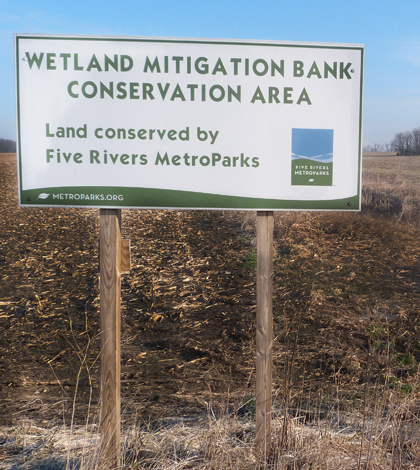 Southwest Ohio’s first wetland mitigation bank is in early stages of development, but has already been deemed “great.” Five Rivers MetroParks, based in Dayton, saved 364 acres of earth from becoming a landfill to construct the Great Miami Wetland Mitigation Bank (GMWMB). A mitigation bank gives developers destroying wetlands the option to purchase credits that will make up for lost land resources. The GMWMB is the only bank in Ohio to offer stream restoration credits. It is also the only mitigation bank in Ohio to be owned, designed and managed by a conservation organization.

The GMWMB will contain 61.2 acres of restored wetlands, 77.5 acres of wetland and riparian buffer, 220 acres of prairie and forested habitat and 4,920 linear feet of restored headwater stream habitat. Construction began in fall of 2011. Mike Enright, a wildlife biologist with Five Rivers Metroparks, said he hopes to have emergent vegetation in the wetland by the end of the summer and forested wetland in four to five years.

“We have a whole mosaic of habitats,” Enright said.

The Clean Water Act requires developers who will disturb a wetland to receive a permit from the United States Army Corps of Engineers. A 2008 update to the act included mandatory compensatory mitigation of wetlands lost because of human activity. Developers can restore an existing wetland, construct a new one or buy credits from an organization managing a mitigation bank, such as Five Rivers MetroParks. An EPA estimate shows that the 46 mitigation banks that existed in the United States in 1992 ballooned to more than 500 after 2009.

It is no surprise that the GMWMB is suddenly a hot commodity for Southwest Ohio developers. After the project is complete, approximately 5,300 credits will be available for area developers to purchase, promoting economic growth in the area. Five Rivers MetroParks recently received approval to sell 30 percent of the available credits before construction, and they have already sent out contracts for them.

“One of the big things most people don’t realize is wetland and stream mitigation credits are worth a lot of money now,” Enright said. “We have people lined up to buy credits.”

Credits will cost approximately $50,000 per acre of land and $300 per foot of restored stream area. Revenue will fund the cost of construction and eventually convert the area into a MetroPark with hiking trails and other perks for outdoor enthusiasts. The GMWMB is unique in its ideal wetland features. It has hydric soil, formed under saturated conditions, a high groundwater table and huge amounts of subsurface tile. Luckily for Five Rivers Metroparks, this means the land needs very little maintenance and construction.

A further benefit, Enright said, are the prairie and forested areas that will naturally buffer the wetland, a feature most mitigation banks lack. This should create a more diverse habitat to attract native wetland species. Enright said Five Rivers MetroParks will introduce rare amphibians such as spotted salamanders and wood frogs that may not make it to the area on their own. The parks will also manage invasive species that have no problem finding new habitats. These organisms often compete with native species for resources, removing vital niches and disrupting the natural ecosystem.

“We are so excited about this because MetroParks has a long history of controlling invasives well,” Enright said. “We think that being the owner and manager puts us in a unique position to control invasives before they get out of hand.”

While wetlands are known to facilitate diverse habitats, filter water and provide flood control, their effect on greenhouse gases is less certain, especially for man-made wetlands. Amy Burgin, an aquatic ecologist and Terry Loecke, a soil scientist, will be studying the GMWMB to determine how gases are exchanged with the atmosphere in newly created wetlands. The married pair, now both professors at the University of Nebraska in Lincoln, lived near the area during the conception stages of the bank.

To study the site remotely, consultants will install a network of sensors measuring a variety of soil and weather parameters. These sensors will send data to a NexSens mast-mounted 4100-iSIC data logging system. The solar-charged system uses radio-to-cellular telemetry to send data to NexSens WQData center using iChart software. With this system, Burgin and Loecke can view and manage real-time data from the Trotwood bank site in Nebraska.

“We can sit here in Lincoln and look at the wetlands knowing the conditions exactly,” Burgin said. “We were thrilled with that.”

Burgin and Loecke will measure soil oxygen, a possible indicator of carbon balance and greenhouse gas emissions. They will also be measuring soil moisture, salinity and temperature. These control variables will predict the amount of greenhouse gases released from the wetland and how much carbon will remain stored. If their results are consistent, the pair hopes this site can be a model for other wetlands.

“It’s kind of a picture we’re hoping to color in,” Loecke said. “We’re just wanting to have confidence in the data that we have.

The data is valuable to Five Rivers MetroParks as well. Enright said the data created by Burgin and Loecke will be important performance criteria to present to regulatory organizations.

“The sensor system that will be put in is absolutely unique,” Enright said. “No other mitigation project has a sensor system like this.”

If current trends continue, the Great Miami Wetland Mitigation Bank could be a win for the diverse stakeholders involved, while creating a new wildlife and better habitats, in the Southwest Ohio area.