Birds, Fish and Shifting Sediment; How Lake Erie Buoys Measure It All 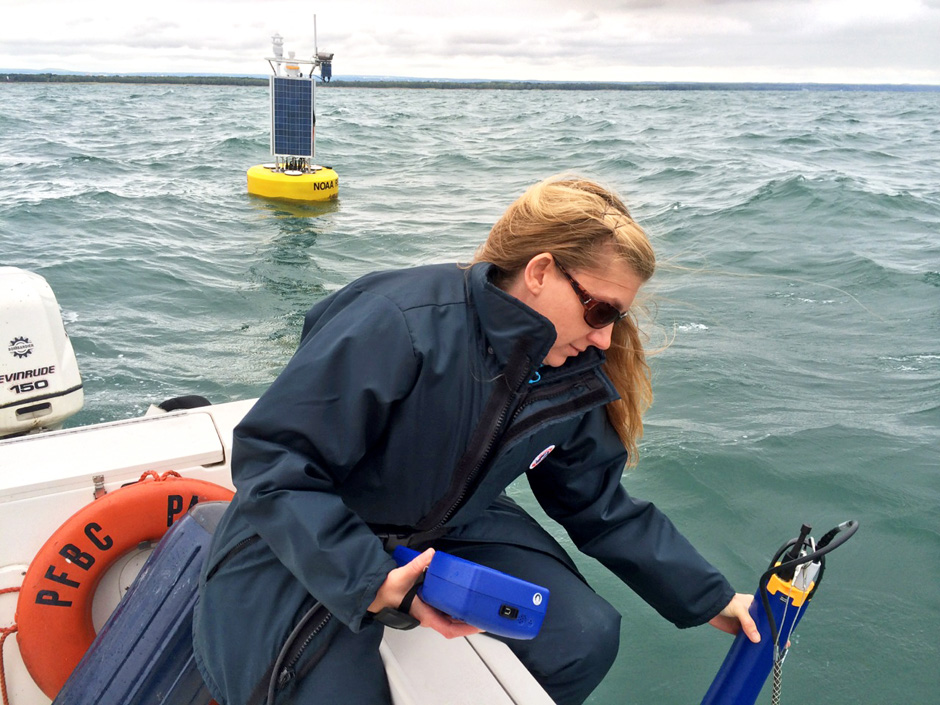 Jeanette Schnars, executive director of the Regional Science Consortium which is based out of Pennsylvania, collects water quality data near one of the center's buoys that help track temperature, pH and turbidity. (Credit: Jeanette Schnars)

Since its population bottomed out, the federally-endangered Piping Plover in the Great Lakes has made a comeback for the ages.

A population that once measured approximately 17 pairs and rebounded, hitting 76 pairs in 2017. The same year that count was made, the plovers had also returned to Gull Point, a nesting location that hadn’t been used in more than 60 years.

In an effort to understand some of the conditions that have allowed this species to return to its habitat, researchers have directed their attention toward a curious instrument for help.

A buoy that floats off the coast of Presque Isle State Park, near where Gull Point is located.

“Wind speed and direction, as well as wave height, are critical data to anticipate water levels at Gull Point…” said Mary Birdsong, assistant director and lead shorebird monitor at the Erie Bird Observatory. “I count on the RSC weather data because it is far more accurate than any weather app I might have. Wind speed on the mainland is often far less than at Gull Point, and no weather app gives me wave height.” 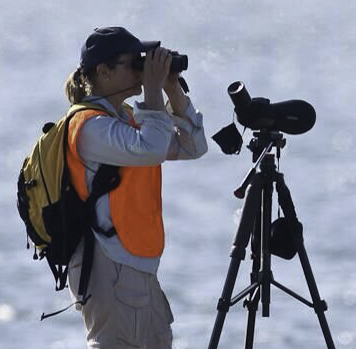 The Nearshore buoy is run by the Regional Science Consortium (RSC). During its operating days, the buoy will collect and send hundreds of data points. It should come as no surprise what kind of data the RSC’s Nearshore Buoy collects. But, as in the case with the Great Lakes Piping Plovers, how that data is informing research is where it gets interesting.

Water and air temperatures, turbidity, wave height, wind speed/direction and pH levels all provide audiences the basics conditions of what to expect off the Lake Erie coast in Pennsylvania. But what about understanding regional bird species or the potential toxicity of this summer’s Blue-green algae bloom? How about answering why fishermen aren’t having as much success when they cast their lures or predicting the precise location where more sand nourishment is needed?

The longer the Near Shore Buoy collects data, the more researchers are finding clever ways to utilize live data compiled from its on-board weather station.

“It’s telling all these people different things. The same information that pertains to so many different projects are being used by such a diverse audience,” said Jeanette Schnars Ph.D., the Executive Director of the consortium.

From when the Nearshore Buoy is deployed in the spring to its return journey back on land in the fall, it will collect and transmit information every 20 minutes on around 20 different parameters.

And it’s all free for the public to use.

While the Near Shore Buoy is one of four owned and maintained by the consortium, it’s easily the most versatile – and expensive. Following the $85,000 purchase price the institution shelled out in 2014 to acquire the Nearshore Buoy and its moorings, each winter requires maintenance fees that rise into the tens of thousands.

Despite those costs, data the buoys provide could be considered even more valuable. Just ask the four million visitors that Presque Isle State Park hosts every year – and the agency that runs it. 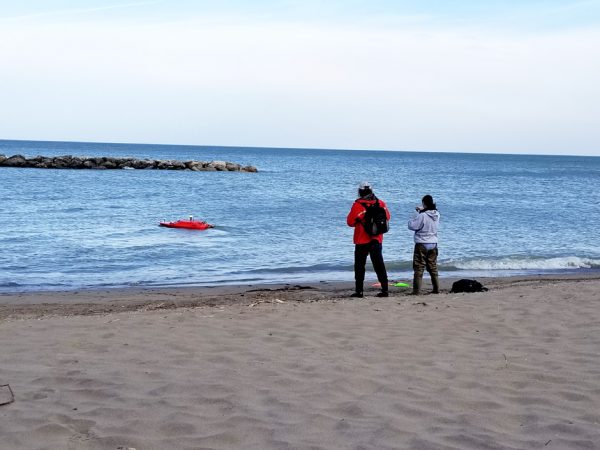 USGS Hydrologists (Elizabeth Hittle and Joseph McNerney) use a remote operated aquatic vehicle to collect data on water velocity and directions. This data is used in conjunction with the Regional Science Consortium Buoy data to describe Lake Erie water movements around the Presque Isle State Park peninsula. (Credit: Jeanette Schnars)*
*Product brand names and equipment displayed in this photo are used to accurately describe or display the equipment and methodology employed in this study. Therefore it must be stated that any use or appearance of trade, firm, or product names is for descriptive purposes only and does not imply endorsement by the U.S. Government.

Like most environmental models, predicting what each day might bring from all the little variances and factors can be challenging, which is why researchers are usually satisfied with a 60% accuracy rate. But the consortium’s buoy models hover closer to 80% percent.

The buoy doesn’t just aid in day-to-day monitoring. Some data informs longer-form preparatory decisions, like judging where on the peninsula sand nourishment needs to occur.

“Buoy data collects water data like temperature, but other attachments can also measure water velocity and the direction the water currents are moving,” Schnars said. “All this becomes important because over $1 million is spent (annually) on sand nourishment.”

Through a grant from the PA Department of Environmental Protection (DEP)-Coastal Zone Management, the RSC collaborates with the USGS to collect data from a remote-controlled data logger and the deployed buoys to model water currents and determine the movement of eroding sand at Presque Isle State Park.

If the day-to-day reports and annual data assessments help boost statewide tourism, then trend data over time helps scientists paint a larger picture of what conditions are determining the output of the lake.

A subject that easily fits this template is harmful algal blooms – one of the better-known cyclical phenomenon that takes place in Lake Erie. Along with the consortium’s smaller beach buoy, the Nearshore buoy uses a Blue-green algae probe. When measuring their concentration in the water, the buoys can quantify the number of Blue-green algae cells present. The RSC is collaborating with the U.S. Geological Survey to create a predictive model using data from the buoy.

“In addition to Blue-green algae cell counts, we can also look at temperature, pH, change in temperature, how quickly it’s changing over time. Then we can start putting all that information together and looking backward in time, to understand, ‘these are the scenarios when we had high toxin levels or low toxin levels,’” said Schnars. 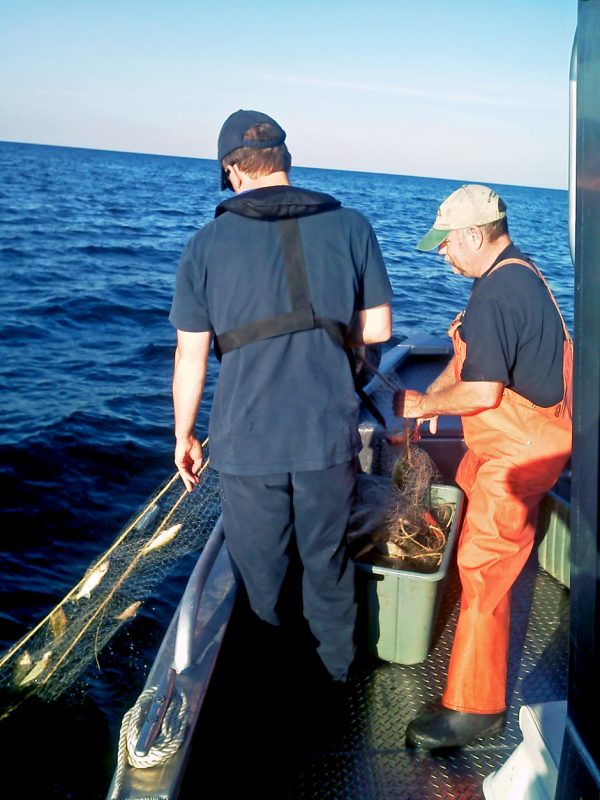 Pennsylvania Fish and Boat Commission – Lake Erie Unit conduct annual fish sampling (seen in photo) and angler catch surveys to better understand the current and future populations of Lake Erie’s most popular sportfish. The Regional Science Consortium’s buoy data not only provides them real-time information on Lake Erie conditions, this data is also compared to the type and abundance of fish collected during sampling efforts and the angler’s catch of sportfish. (Credit: Jeanette Schnars)

Harmful algal blooms have been known to contaminate drinking water, deplete oxygen in lakes and even kill pets. Once scientists better understand the conditions put in place when higher or lower concentrations of toxins are released, they can better predict just what kind of algal bloom Lake Erie will experience the following month or year.

The data is posted in real-time on the RSC’s website palakeeriebuoy.com, which features each operational buoy, the data collected and a satellite map. Easy enough to comprehend, users now extend to boaters and fishermen preparing trips on Lake Erie. “We use the data from the buoy to plan our sampling trips and to help prepare us for the conditions we will encounter when we leave the dock.  Currently, we run a boat angler survey three days a week,” Mark Haffley, a biologist out of the Lake Erie Research Unit at the PA Fish and Boat Commission. Haffley added that the commission is even dissecting archived data to bulk up its harvest and catch-per-effort models, as well as better predicting lake conditions from past events.

As the diversity of uses for the data has grown, so has its popularity.

“We have noticed since launching the Near Shore Buoy, people have gotten excited. The website’s gotten a lot of hits. This last year, it was off the charts,” said Schnars. At its peak, the website was accruing 74,000 views a month, with 14,000 unique viewers returning to the website. And that doesn’t include everyone using the smartphone app. Many of those viewers range from members at the U.S. Geological Survey to state-funded agencies, granted funded research projects and prospective boaters and fishermen.