Breaking Down the Research Magic Being Captured by Duke’s WIzARD 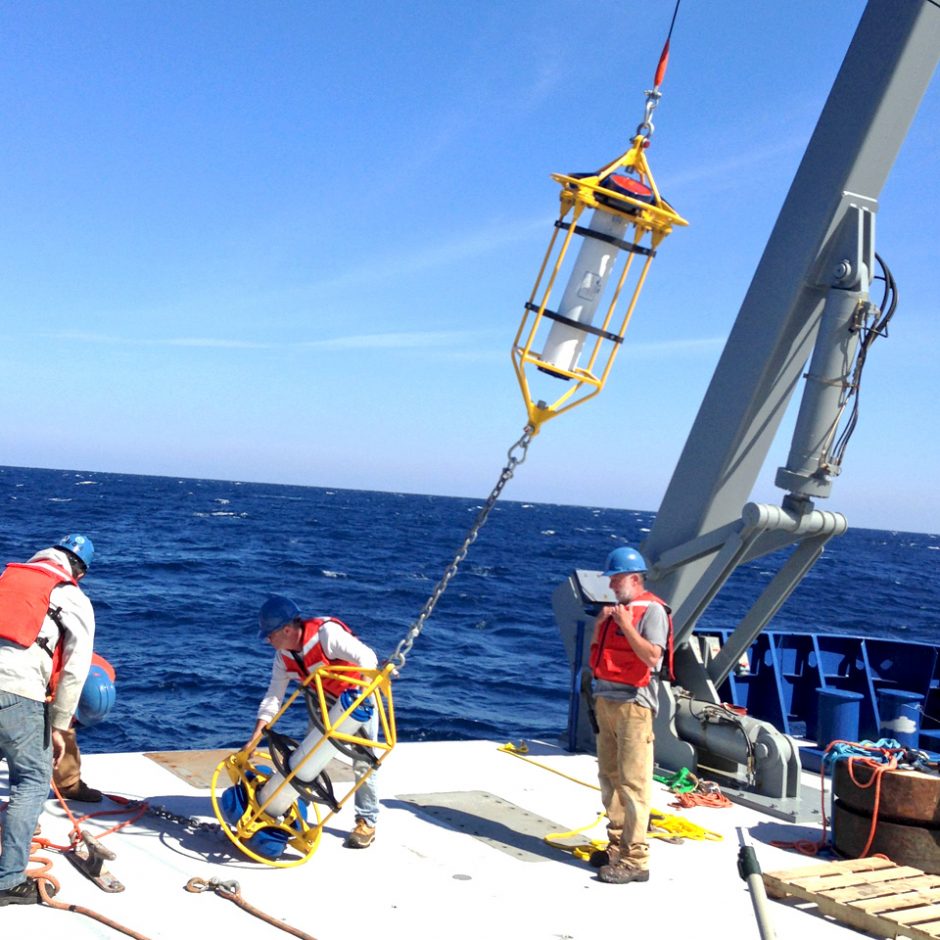 Mooring deployment from the fantail of the R/V Neil Armstrong. The ADCPs in their cages are shown here attached to the mooring line/chain, which is itself strung through the A-frame through which the mooring is deployed. (Credit: Zach Swaim, Duke University Marine Lab, Nicholas School)

The start of Duke University’s oceanographic mooring line doesn’t begin at the surface of the ocean, but 500 meters beneath it. Floating at the top of the mooring system is a 64-inch syntactic sphere with 2,500 Lbs of buoyancy. It serves a duo of roles as both a floatation device and housing for two high-end acoustic monitoring systems.

Next comes 75 meters of chains and wires before coming to two ocean current profilers, one pointing up and the other pointing down. Next to that equipment are two instruments that measure temperature and salinity.

Next comes several hundred more meters of wire before arriving at several glass balls, more floatation orbs. Finally, right before the anchor tying it all to the ground, are two acoustic releases waiting to let all of it float back to the surface.

This 500-meter ocean monitoring behemoth is the Wideband WoMBAT Integrated Autonomous mooRing for Deep water, or the WIzARD, for short. This $400,000 piece of equipment may not be the most expensive to be deployed for ocean monitoring, but it was placed in one of the ocean’s most active places. 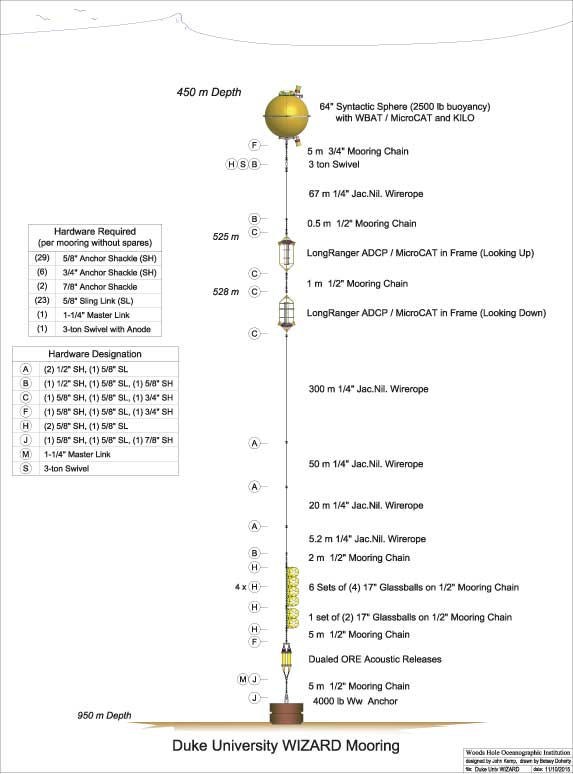 A graphic design of complete WIzARD system, from the syntactic sphere floating 500 meters below the surface, to the anchor on the ocean floor. (Credit: Nicholas School of the Environment at The Duke University Marine Lab)

“Off Cape Hatteras is a place I like to call the Serengeti of the Atlantic,” said Doug Nowacek, a professor of conservation technology in environment and engineering at Duke.

A place where a cold water current flowing from the coast of Labrador, near Newfoundland, Canada, carrying a bounty of nutrients, collides with the warm-water Gulf Stream born out of the tip of Florida. There, miles off the coast of North Carolina, warm water from the south carries nutrients brought from the north to the surface, where photosynthesis ushers in a level of productivity seldom seen anywhere else.

“It’s just teeming with life,” Nowacek said. “This place has the highest density and diversity of cetaceans in the Northwest Atlantic and probably the entire Atlantic Ocean.”

It was also a region viewed through the lens of research conducted in multi-week timespans. Before Duke’s WIzARD was deployed, there had been a few oceanographic cruises that studied the area. Some ventures focused on the biological presence in the area and some on the physical conditions surrounding its flourishing life.

Even Duke University’s Nicholas School of the Environment & Pratt School of Engineering had done some work looking at whales and dolphins.

“Our work’s been mostly focused on pilot whales and what their dive behavior is,” Nowacek said. “We’d put a tag on one, and they’d dive down 800 meters, you hear them click away, buzzing, but we have no idea what they’re making that attempt on.

But with the WIzARD, researchers now have the capability of not taking a spatial assessment of the region, but a temporal one spanning nine months, rather than two-three week intervals.

And they also have the capability of not just assessing the biological presence surrounding the entire 900 meters of their chosen water column, but the physical factors as well. The data collection starts at the top, where the syntactic sphere is floated by 2,500 pounds of buoyancy retained in an interior foam. 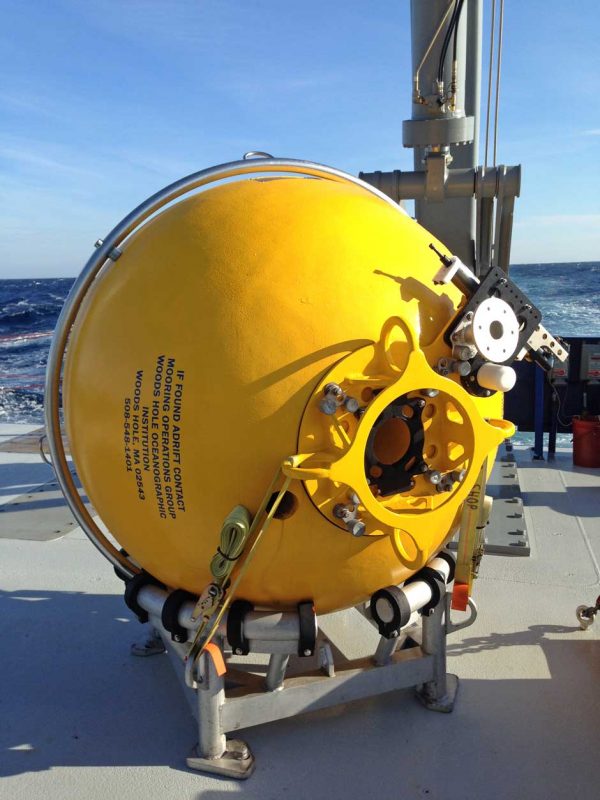 The large syntactic sphere that is the top of the mooring, supplying an enormous amount of buoyancy to keep the mooring deployed correctly. The sphere is also where the WBATs are deployed. (Credit: Zach Swaim, Duke University Marine Lab, Nicholas School)

Attached on the exterior of the sphere are two acoustic recording centers called Wideband Autonomous Transceiver – or WoMBAT. Each with a capability of sending out sound pulses 400 meters in a cone-shaped beam from the transducers, both have been strategically placed at the middle depth of the water column in order to cover as much of it as it can.

“(It’s) a high end acoustic system that gives us target strengths of things in the water column at that frequency, which is about 75 kHz. And they sit there and they ping once a minute. And they use those pings and the returns from those pings to tell us what’s in the water,” said Nowacek.

The information returned from those pings comes in the form of acoustic data stored in “the brains” of the syntactic sphere, which sits inside pressure-housing built to withstand the weight of the water above.

Luckily, enough research on different species in the water has rendered some useful data for the mooring system to take advantage of. Scientists have looked at the acoustic signatures of different fish and crustaceans and can do a pretty good job identifying one based on the kind of response they get.

At 525 meters below sea level, the other half of Duke’s mooring’s capability kicks in. Two acoustic doppler current profilers (ADCP) shoot out four beams from each device with acoustic pings. These instruments apply the Doppler shift principle to measure the direction and magnitude of the current based on the returned acoustic signals. 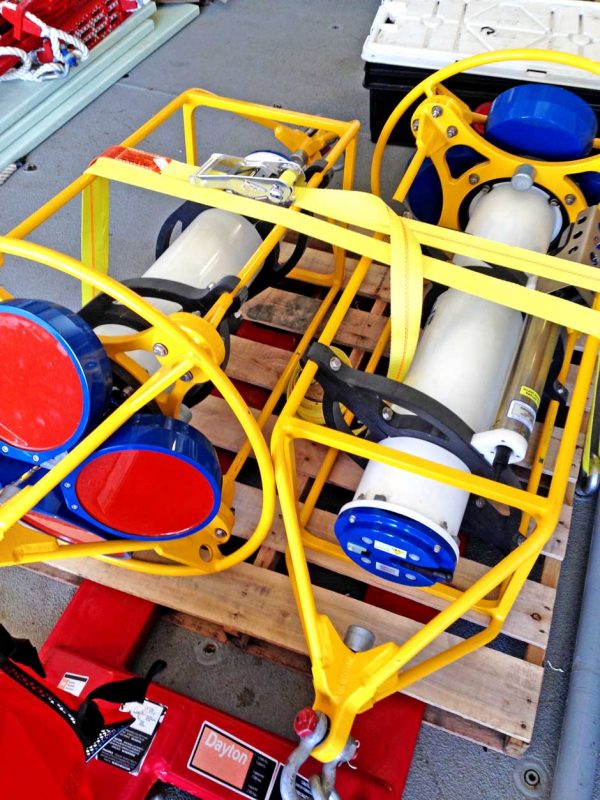 The two Long Range ADCP units, shown here in their deployment cages. The red discs are the transducer heads, and the ADCPs measure the direction and velocity of water currents with short acoustic pings being transmitted and received by the four transducers. (Credit: Zach Swaim, Duke University Marine Lab, Nicholas School)

Labeling it a “huge advance” for those looking to measure the oceans, the ADCP can measure water speed in 10-meter intervals. The dynamic of water speed and direction in Nowacek’s “Serengeti” is key to explaining the role it plays in fostering productivity in the area. Click To Tweet

“Understanding how the water moves is a very important part of that. What is it about this area that lends itself to this amazing mixing and production?”

But the data collection bonanza doesn’t stop at meter 525 for; attached to each ADCP is a MicroCAT that can sample the conductivity, temperature and depth (CTD) of an area. Measuring the abundance of salt ions within one location, the MicroCAT can help input basic data that scientists use to describe water masses.

“By taking the temperature of the water and the salinity, you can learn about what the water mass is and where it came from,” Nowacek said. “So the CTD measurements are incredibly instructive and illustrative about what water mass you’re dealing with.”

Beyond the rest of the wiring is one final piece of hardware operating via acoustics. Following the rule of two, ORE acoustic releases lay just above the mooring’s anchor, waiting for a coded signal from a researcher most likely looking to send a command akin to “let go.” 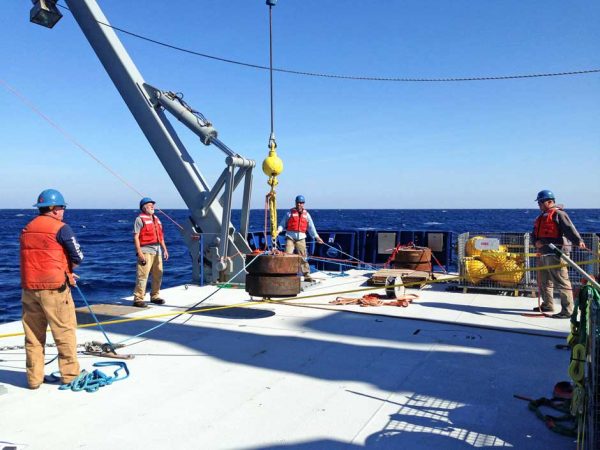 A second one is included as a failsafe if the first one fails to release upon command. Once the mooring is unshackled, it floats to the top and is collected at the surface about eight minutes later.

Duke University’s versatile system first saw action in 2016 when it was deployed. Researchers collected it in 2018, where a variety of student research groups at Savannah State University have been studying its findings.

While its anchor will be donated to the ocean bed after its release, built to become the foundation for a new reef, the rest of the mooring line will be reused for future forays into the Mid-Atlantic region.