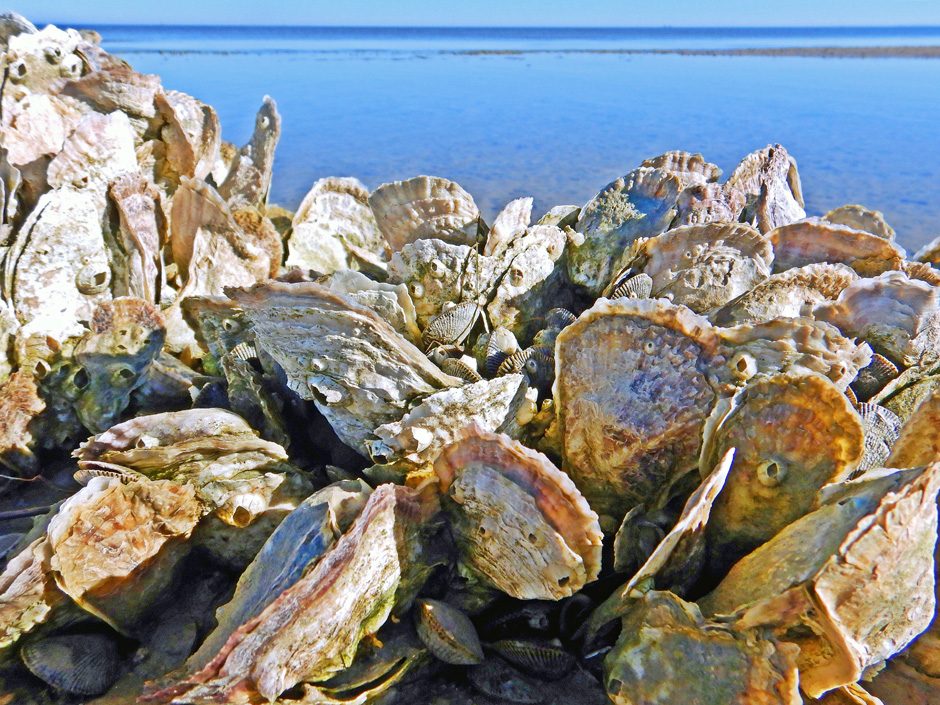 Within many Texas bays, lower salinity “brackish” waters exist from the mixing of fresh river waters and salty Gulf waters, creating conditions that allow the eastern oyster to thrive.

The health of oysters is monitored by taking measurements of oyster abundance, size, and disease, but so is the health of other organisms as well. Water quality monitoring tells part of the story of organism health.

“A major focus of ours is restoring reef habitat in the Gulf,” Pollack says. “We take hard substrates, like oyster shells, limestone, crushed concrete, or river rock, and put them back in the bay where oyster reefs have been degraded or destroyed. The hard substrate is for the benefit of tiny planktonic oyster larvae, baby oysters, who need a stable surface to affix themselves to, allowing them to grow and develop. In a pristine bay system, the natural hard substrate is provided by older generations of oysters, whose shells act as building blocks on which younger generations can attach and grow.” 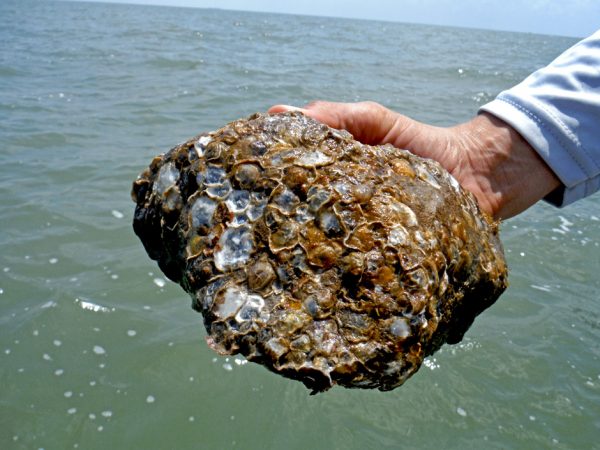 But reef substrate can be lost for several reasons, limiting the ability of younger generations to attach and grow. “Sometimes that can happen if oysters are harvested at unsustainable levels,” notes Pollack. Reef substrates can also be covered by sediments and lost due to storm surge and runoff, as occurred in Galveston Bay after Hurricane Ike in 2008. One strategy that has been successful for replacing natural hard substrate is recycling leftover oyster shells from restaurants. The leftover shells are put out in the sun for six months to cure, and they are then used as hard substrate building blocks to restore degraded reefs. “We have seen incredible success in terms of oyster attachment and growth as well as increasing biodiversity of reef-dwelling fauna using these methods,” Pollack observes.

A surface-operated suction sampler powered using a Honda 160cc semi-trash pump is used to monitor reef-dwelling organisms. This device can be used to vacuum small fish, shrimp, crabs, and other creatures off the reef, holding them in a mesh bag at the end of the hose. The bag is then carried to the deck of the boat where the organisms can be identified and counted. Oysters are collected from baskets filled with restoration substrates and embedded in the reef, allowing sampling to occur with minimal disturbance to the restored reef. 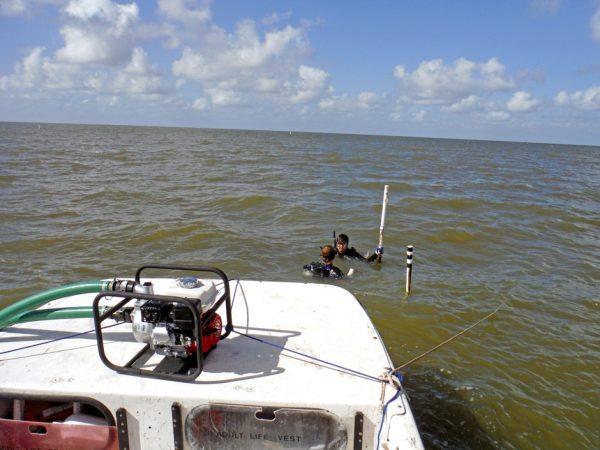 Suction sampler on the front of the boat, divers Terry Palmer and Kevin De Santiago getting ready to sample a reef site. (Photo Credit: M Dumesnil)

The Nature Conservancy has been a partner in restoring oyster reefs. “Their 54-acre restoration of Half Moon Reef in Matagorda Bay is one of the largest restored reefs in the U.S.,” Pollack notes.

Oysters are also regarded as “canaries in the coal mine,” says Pollack. “We monitor them because their health is a good indicator of the health of the entire bay system.”

Once larvae attach to a reef, they are stuck. The spat, or attached oyster larvae, are about one millimeter in size. “They take about 18-24 months to reach harvestable size, 76 millimeters or 3 inches. When we monitor a reef and observe that many of the oysters are growing from spat to large sizes, we know the environment is stable and the reef is healthy,” she says.

But life as an oyster is not without peril. Oysters in the Gulf commonly suffer from Dermo, a disease caused by the protozoan parasite Perkinsus marinus. The parasite can accumulate in the oyster tissues over time. “It’s hot and salty in Texas, which is just the kind of environment that the parasites like,” Pollack indicates. “The disease does not affect people, but it does affect the number of oysters that make it to harvestable size, which has negative effects on the seafood economy. Oysters do well when the water is colder and the salinity is lower. Those conditions can retard disease development and reduce disease-associated oyster mortalities.”

In summer months, the parasite rapidly accumulates, spreads, and kills oysters. “Sometimes 75 percent or more of the oysters are infected,” says Pollack. “Infection rate depends on a variety of factors, with temperature and salinity being two big ones. Another factor is the fact that oysters live in close proximity on reefs and are suspension feeders. Because Dermo is transmitted directly from oyster to oyster through the water, once the parasites are present in an oyster population, it is relatively easy for infections to spread.”

While oysters on a restored reef typically start out Dermo-free, infections can become established in later years. “On the restored reef in Half Moon Bay, there was no Dermo for several years, but now we are seeing signs that the disease is starting to get established,” observes Pollack. 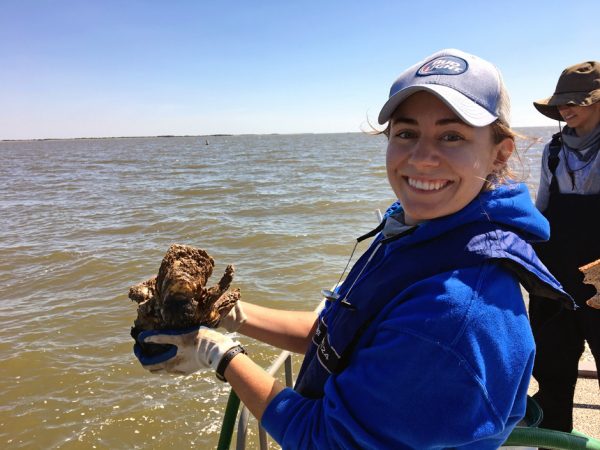 Dermo infection levels can be determined by researchers who retrieve oysters from the reef, shuck them, and then culture small pieces of oyster tissues for approximately one week. The tissue is then stained, causing Perkinsus marinus cells to appear as blue-black spheres that can be easily counted using a microscope to determine the oyster’s infection level.

Other monitoring tools used by Harte include a modified epibenthic sled, a canvas-covered rectangular steel frame with a row of attached steel teeth along the front bottom edge, a 1-mm mesh plankton net attached to the back, and sled runners on the bottom. When towed behind a boat, it slides on the bay bottom and collects shrimp, plankton and other organisms. “The information we get from the modified epibenthic sled is invaluable: it helps us understand what organisms are using the reef, but aren’t necessarily living within the reef itself,” says Pollack. Blue crabs and whelks, for example, are reef-associated (but not necessarily reef-dwelling) organisms that may use the reef for foraging. Gill nets can also be used to sample larger, more transient fish. “We’re trying to holistically understand what creatures are benefiting from the reef restoration,” Pollack adds.

The Harte Research Institute has been performing oyster reef restoration work since 2009. One unique partnership is with the restaurant industry and seafood wholesalers to recycle oyster shells for use in habitat restoration. In addition to oyster shells, Pollack’s research has assessed the ability of limestone, river rock and recycled “clean” concrete to be used for restoring reefs. “We have even looked at using recycled porcelain from sinks, toilets and tubs,” Pollack elaborates. “The oysters will attach to it, but ultimately we were too concerned about potential risks of contamination.”

In addition to providing food for people and wildlife, oysters provide other benefits to the environment. “An adult oyster is estimated to filter 50 gallons of water in a day,” notes Pollack. “This makes them an ideal solution for improving water quality. However, if the oysters are located in a polluted environment, they can accumulate some of this pollution in their tissues, making them unfit for consumption.”

In addition to providing food and acting as a water filtration system, oysters provide another benefit: they create a vertical reef that dissipates wave energy and reduces waves’ destructive power on coastlines. This function acts to protect sensitive coastal habitats such as salt marshes, as well as the creatures that depend on them. “All the wave energy would hit the shoreline if it weren’t for reefs,” says Pollack. “If there is a hurricane, the destruction will be much worse without reef protection. Without energy reduction, wave energy can undercut shorelines and result in large amounts of shoreline loss.  We have an interest in “living shoreline” approaches to restoration because we are seeking to integrate nature-based solutions to problems that result in ecological benefits as well as offering protection to coastal communities and built environments. When we successfully restore oyster reefs, we can get water quality improvements, habitat benefits, and often shoreline improvement benefits too, along with the value of the oysters themselves.” 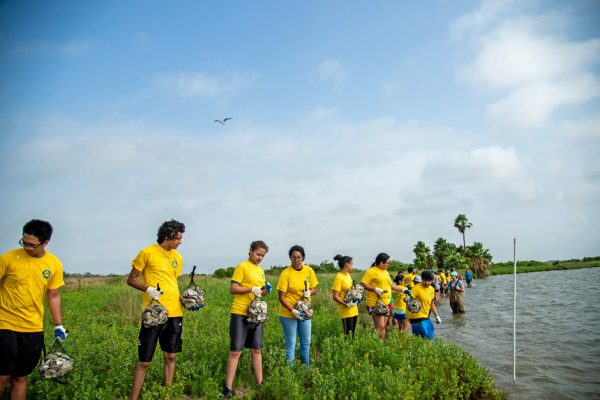 One example of the value of living shoreline restoration is a recent project partnership with Goose Island State Park, National Fish and Wildlife Foundation, and the Coastal Conservation Association. “We restored oyster reef in 1 meter of water as well as along the shoreline parallel to the shore in St. Charles Bay to provide erosion control benefits. We finished restoring the reef shortly before Hurricane Harvey came through,” she recalls. “After Harvey, not only did the reef survive, but the Hurricane may have induced oyster spawning because we found an amazing amount of spat just 1 month post-restoration.” The restored reef enhanced the area and helped keep it intact, while also serving as a home for myriad species.

But the response of the reef in St. Charles Bay to Hurricane Harvey was not universal. “For Galveston Bay on the upper Texas coast, the extraordinary amount of rain that flooded the Houston area eventually drained into Galveston Bay. The salinity dropped to zero, and the Bay turned to freshwater,” says Pollack. “Hurricane effects seem to be very location and storm-specific. When Hurricane Ike came through in 2008, sediment blanketed and suffocated close to 8,000 acres of oyster reefs in the Bay, making the freshwater inputs less of an issue.”

In the future, Pollack expects to continue monitoring, protecting and restoring oyster populations in the Gulf. Her interest in oyster health and reef restoration actually goes back many years. “I first became interested as a postdoc, working with Dr. Paul Montagna. His big interest was the effects of freshwater inflow on the delicate balance between freshwater and saltwater that supports bay health. We were looking at tiny worms and clams, less than one millimeter long, that we were collecting from the muddy bay bottom. They are used as bioindicators of bay health. In 2007, Dr. Montagna hired me to look at another bioindicator species: oysters. Around this same time, some key research papers were published that described the staggering loss of oyster populations around the globe; greater losses than coral reefs, which was quite shocking.  My focus turned toward reinstating lost ecological benefits through oyster reef restoration. My interests worked well at Harte, as we have a unique approach here. We have diverse perspectives from many disciplines, including lawyers, economists and political scientists. I enjoy being part of such a large and varied team,” she says. 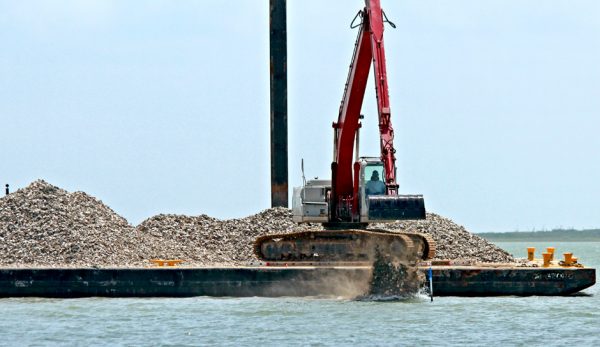 The Harte Research Institute doesn’t do its work alone, accomplishing more by coordinating with many partners, including Texas Parks and Wildlife Department, Texas General Land Office, NGOs, conservation groups and the public. “We like to find practical applications of our scientific research. For us, it’s not just about publishing papers,” says Pollack. “For example, we have developed tools to assist resource managers and restoration practitioners in identifying the best places to restore oyster reef. We don’t have to guess. Publishing papers is great, but that’s not the main driver for me. For me, the driver is that there are problems in need of science-based solutions that we can provide through our research.”

To summarize, Pollack wants to emphasize that even if someone doesn’t eat seafood, oysters are still worth caring about. “They help support habitat, they help support recreational fishing and they help buffer against hurricane effects. They give much larger benefits than just being food,” she explains. “Oysters are small but mighty; by restoring their populations, we can generate large scale environmental improvements.”