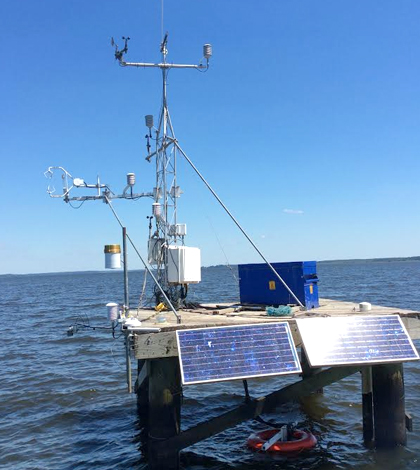 When Heping Liu, associate professor of civil and environmental engineering at Washington State University, reviewed the research available on carbon emissions from lakes, he saw an opportunity.

“The data from previous studies on lake gas emissions was mostly gathered during the day, a few times a month, and often only during good weather,” Liu says. “I wondered if we would get the same picture of the lakes’ emissions if we took data continuously under varied atmospheric conditions over the course of a year.”

In their latest study, Liu and colleagues found that lake CO2 emissions were very different once they had filled in the data gap — there were more than 40 percent more emissions than previous studies had estimated.

“We were surprised by the size of the difference once the data had been filled in,” says Liu. “We had thought there might be a difference, but we did not expect it to be so large.”

To fill in the gaps, Liu and his colleagues used an eddy covariance system, something widely used on land but not employed very often on lakes. The eddy covariance system makes it possible to measure CO2 fluxes across the water and atmosphere interface by analyzing high-frequency wind and scalar concentration data to find flux values.

These values were used to determine CO2 exchange rates over Ross Barnett Reservoir in Mississippi. Fluxes of heat and water vapor were also measured using the eddy covariance system. “We collected all the time, both day and night over the course of a year. We collected during sunshine but also through storms,” says Liu. “We actually found that some of the highest fluxes were at night and during storms. Other researchers had missed a lot of these important variations.”

The eddy covariance system was set up in the middle of the reservoir, mounted 4 meters above the water on a wooden platform. It consisted of a three-dimensional sonic anemometer and an open-path CO2/H2O infrared gas analyzer. Additional sensors onboard measured net radiation and water temperature. Air temperature and relative humidity were measured with a Vaisala HMP45C. Wind speed and direction were measured with an RM Young Wind Sentry Set. A Texas Instruments’ tipping bucket rain gauge gathered precipitation totals.

All parts of the eddy covariance system were powered by six deep-cycle marine batteries that were charged by two solar panels. Sensor measurements were recorded by a data logger.

Post-field data processing used FLUXNET’s standard procedures and has been used in previous studies. FLUXNET, a network of flux monitoring sites, is housed at Oak Ridge National Laboratory with support from NASA.

Although Ross Barnett was the focus of their study, Liu and colleagues expect the findings would be similar for other reservoirs and lakes despite having different morphologies.

In the future, Liu says it would be worthwhile to explore water-surface interactions more and see what impacts they have. He and his colleagues might consider using different water sensors and measuring water turbulence. They might also look into better quantifying carbon dioxide concentrations in the water and doing measurements to calculate the carbon budget at a catchment scale.