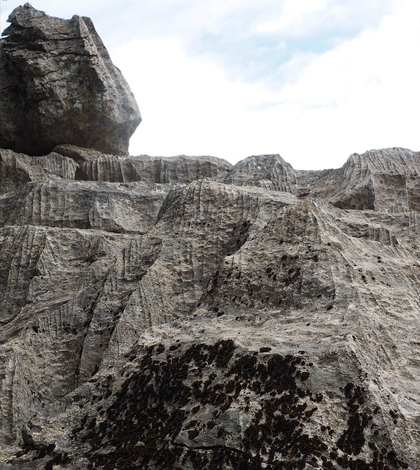 Although it may seem like geological sequestration may not be reversible, seeing as how it consists of carbon stored in reservoirs made of rocks and fluids, Penn State University researchers have found in a recent study that this may not be the case.

Using X-ray tomography techniques via the university’s Center For Quantitative Imaging, Zuleima Karpyn, associate professor of petroleum and natural gas engineering and colleague Li Li, associate professor in the same department, have shown that chemical reactions can occur that allow carbon dioxide to form new flow channels within rock that some might have assumed would serve as a permanent storage site for excess carbon.

“The X-ray tomography images we produce are specialized,” Karpyn explains. “X-ray tomography can be used for many things. For example, it is widely used in the medical field. But the way we use it is different. Our instrument is not calibrated for living things, it’s calibrated for rocks. We can identify fluids inside rocks and conduct flow experiments. Our goal for the study was to recreate underground geologic conditions to study the reactivity of the rock and cement to CO2-rich brine.”

Researchers examined chemical reactions taking place underground during carbon sequestration to identify potential leakage pathways. (A) is a cross-section of a limestone/cement sample before the experiment. (B) shows dissolving in the limestone but not the cement (at the center of the image). (C) is a sandstone/cement sample, indicating that the sandstone remained intact when contacting carbon-dioxide-infused saltwater, and the cement at the core of the sample began to dissolve. (D) shows the pathways created in the limestone from the experiment. (Credit: Zuleima Karpyn / Penn State University)

“The data sets of rock images are very large. We used Avizo image-processing software and MatLab to analyze the image data,” says Karpyn.

Another instrument called an Inductively Coupled Plasma-Mass Spectrometer, or ICP-MS, was used to analyze the chemistry of water coming out from the rocks. The water samples include ions such as magnesium, silicon and sodium. They reflect the extent of rock degradation. The water samples were taken every few hours for eight days and were refrigerated for later analysis.

Li and Karpyn were not attempting to find the best way to geologically sequester carbon in their study. Rather, they were trying to mimic typical geological sequestration scenarios that already exist, such as in abandoned wells, and look for chemical reaction pathways that might result in the escape of sequestered carbon dioxide.

“We looked at a limestone type of host rock with a cement core and a sandstone-type host with a cement core,” says Li. “The carbon is at high pressure and is a liquid. It is mixed with saltwater. We found that when the carbon and saltwater mixture reacted with the limestone/cement system, the cement remained intact because the limestone was much more permeable to flow and was reactive. In the sandstone/cement system, the opposite occurred: the cement reacted because the sandstone was not reactive and remained intact. In that system, the cement was the primary reactant with the carbon and saltwater liquid. So you see, the reaction pathways you get for carbon dioxide release are system- and environment-dependent.”

Carbon dioxide leaks tend to be most likely at the point of injection, as the system is under high pressure, Li says. Over time the host rock system tends to relax, making carbon dioxide release less likely. Li and Karpyn emphasize that choosing the site of geological sequestration very carefully is of utmost importance. Surveying the geological area should be done in as much detail as possible, with robust mapping of the area a primary concern.

If carbon dioxide does escape via some pathways, the results can be serious. When carbon dioxide goes up from the deep subsurface to shallow aquifers or lakes, it can dissolve into water so the water becomes acidic. The water can become undrinkable and uninhabitable for wildlife.

“Everything in the ecosystem can be affected, not just the bigger things like fish but even at the bacterial level,” Li explains. The effect is somewhat similar to ocean acidification, already an ongoing problem due to climate change.

In terms of future work, Li and Karpyn would like to see even higher resolution imaging for their rock samples. “The equipment we have at our Center for Quantitative Imaging is cutting-edge. That being said, in analysis we are always reaching for improvement,” says Karpyn.

The carbon sequestration work, while in many ways an incremental process, has nevertheless held surprises for Li and Karpyn. “We didn’t expect we’d get through the rocks and make new pathways that were as clear as they were,” Li recalls. “We did not realize they were going to stand out as much as they did.”

Li and Karpyn’s work on geological carbon sequestration is performed through a team of professionals and graduate students. Li and Karpyn especially want to acknowledge the efforts of Peilin Cao, a Penn State doctoral student.

“Even though we have definitely found chemical reactions which can lead to escape of carbon dioxide from geological sequestration sites, we aren’t trying to sound an alarm at this point,” Li emphasizes. “Just because there is a potential for these reactions to occur, that doesn’t mean they will occur in a given geological sequestration site, especially if the site is chosen with great care. We simply want to make people aware of potential problems to keep in mind when performing carbon sequestration.”