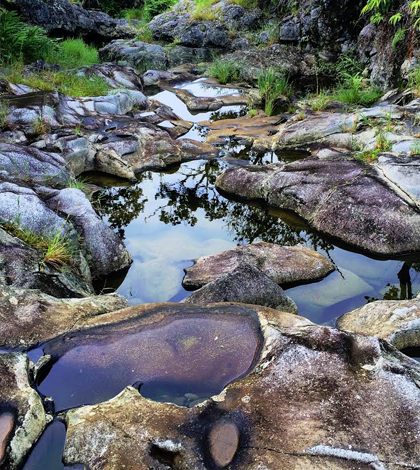 Volcanism and plate tectonics introduce CO2 into the atmosphere and the Earth can store this CO2 in various ways, through the oceans, trees and rivers that act as carbon sinks. The Earth’s crust will also absorb carbon dioxide through chemical weathering reactions, wherein the chemical alteration of exposed silicate minerals consumes carbon dioxide, influencing the carbon cycle over geologic timescales.

The process is very complex. It involves intertwined relationships between climate, erosion of the crust and chemical weathering reactions, and was not well understood until recently. But thanks to recent work, published in the April 14 issue of Nature by Brendan Murphy, doctoral candidate in the Department of Geological Sciences at the University of Texas and several of his colleagues, the influence of climate and chemical weathering on the erosion of mountains by rivers has now become clearer.

Working on volcanic basalt at 12 study sites in Hawaii, Murphy and colleagues drilled cores in the bedrock. At each field site, measurements were taken over reaches of river that spanned 25-50 meters of exposed bedrock. Replicate samples were collected at every site to average out possible natural heterogeneities in the rock. Lead author Brendan Murphy preparing to drill samples of bedrock from the streambed of Puanui Gulch on the dry side of Kohala Peninsula. (Credit: Kory Kirchner)

They used a Pomeroy portable rock drill, which is actually a modified Stihl gasoline chainsaw. To assess the chemistry of the cores, they used a Bruker handheld XRF, which uses X-ray beams to assess the chemical composition. Iron and aluminum were elements of interest, as they accumulate in rocks with chemical weathering, and magnesium and calcium were also measured because they are flushed away as river bedrock is chemically altered.

Chemical weathering also results in the reduction of rock strength, which influences the erosion rates of rivers. To assess the connection between climate-dependent chemical weathering and bedrock hardness, they used a Proceq Type-N Schmidt hammer. This portable field instrument measures the elastic properties of bedrock.

Core samples were also used to assess rock strength. Murphy and colleagues used a method known as the Brazilian splitting test, which measures rock tensile strength. In the lab, the cores were placed on their side in an ELE International Versa Loader, which applies an unconfined compressive load. Rocks were put under increasing stress until they broke. This breaking point could then be used to calculate the tensile strength of the rock, a property important in controlling the rate of river erosion.

Bulk density of the rocks was measured using calipers and electronic scales. Microscopy was also performed on the rocks. The rocks were glued to glass microscope slides and ground into thin sections. Their mineralogy was then examined for comparison to the chemistry analysis. Murphy and colleagues compared the Schmidt hammer data obtained in the field to the tensile strength data obtained in the lab to see if there was agreement.

“We found that the Schmidt hammer provides a reliable measurement that scales with our laboratory assessment of rock tensile strength,” says Murphy.
Although the bulk of the project involved field and laboratory work, the project also involved modeling the rivers’ longitudinal profiles, or elevation versus distance.

“We modeled the rivers’ longitudinal profiles in order to assess the applicability of the stream power incision model,” says Murphy. River incision is the vertical erosion of a river into bedrock such that the streambed ends up at a lower elevation than where it began.

“Typically the steeper the slope and the higher the river discharge, the more erosion you tend to see in rivers,” says Murphy. “But we found it isn’t quite that simple. There are also local climate effects on erodibility. Climate is not just expressed in the erosion of bedrock rivers through a dependency on river discharge, which is what was previously assumed.” A view of the headwaters of Waianaia Gulch on the wet side, which terminates at a cinder cone, known in Hawaii as a pu’u. (Credit: Brendan Murphy)

“The traditional model assumes spatially uniform erodibility, and we found that this didn’t fit the rivers across our study site very well. However, when we incorporated the effect of spatially variable precipitation on erodibility, the modeled long-term erosion rates were dramatically improved,” Murphy says.

Murphy and his colleagues came up with the idea for linking local climate, chemical weathering and river erosion from previous scientific research that had looked at these links individually and in various parts of the landscape. Their study was designed specifically to try to link all the factors together.

The Island of Hawaii was chosen as a research site because it is composed entirely of basalt, a volcanic rock that is relatively susceptible to chemical weathering. Kohala Volcano, used as the site of the research, is about 460,000 years old.

“Basalt has a unique mineralogy that is chemically unstable at the Earth’s surface, meaning more mobile cations can be easily removed by weathering reactions,” Murphy explains. “The field area also has a dramatic range of precipitation rates, which we hoped would enhance the expression of the relationship between local climate and chemical weathering.”

The ability to quantify the effects of climate on the erosion of rivers presents the possibility of modeling how past or future changes in climate could influence the topographic evolution of rivers and their surrounding landscapes.

“Our research presents a process-based explanation for how erosion rates are dependent on climate, and may help explain previously conflicting observations of climate sensitivity in other landscapes,” says Murphy.

In the future, Murphy and his colleagues would like to get their own handheld XRF, which they currently share with other research groups. They would also like to see more expansive coverage of airborne LIDAR. This would provide more detailed topographic information for their research sites as well as other landscapes.

“Some states have already invested in flying LIDAR for the whole state,” says Murphy. “Doing this everywhere would provide a great dataset for the geomorphology community.”

In addition to Murphy, Johnson and Gasparini, San Francisco State University Geology Associate Professor Leonard Sklar also helped in the work. They also had help from many graduate students at U. of Texas and Tulane.