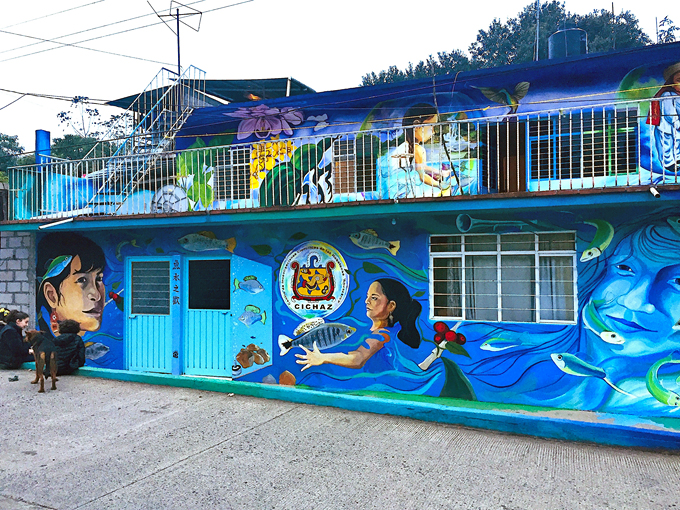 The story of the Centro de Investigaciones Científicas de las Huastecas “Aguazarca” (CICHAZ) Biological Field Station, a member of the Organization of Biological Field Stations (OBFS), starts with Dr. Gil Rosenthal, Professor of Biology and Chair of Ecology and Evolutionary Biology at Texas A & M University. Rosenthal has worked in the Huasteca region of Mexico since 1994 and for years kept his research equipment at a local ranch/hotel with the dream of one day having a field station where he could run experiments with collaborators and students. Since 2005, Rosenthal has been the Co-Director of the field station along with his wife, Dr. Rhonda Struminger, Research Assistant Professor/Assistant Professor of the Practice, Ecosystems Science & Management, Texas A&M University. Struminger has been studying field stations and their outreach since 2015 though she has been in the education industry since 1999.

The CICHAZ field station is located at 1000m elevation on the outskirts of the small town of Calnali. CICHAZ is the only scientific research station in the Huasteca region of eastern Mexico, which straddles multiple states and is located far from regional research universities. This unique bioregion is the northernmost “peninsula” of mesic Neotropical forest between the Gulf plains and the highland Sierra Madre Oriental. This area is one of the most biodiverse regions in the megadiverse country of Mexico, with over 450 bird and 540 plant species, including several so rare that they are at risk of extinction. Biotopes vary dramatically over elevation and moisture gradients. “The Huasteca region [the lowlands] is Neotropical, where you can find parrots, for example. But there are also Nearctic areas, areas with sycamore trees. If you are at 1200 meters elevation, the habitat will remind you of Appalachia, but if you go down 600 meters you’ll find mango trees and giant figs. It’s a very understudied region,” Rosenthal emphasizes. Not only are there many diverse animal and plant species in the Huasteca region; it is also an area filled with human diversity. “The Huasteca has a high concentration of people who speak native languages.  Within a few hours’ drive there are two language families – Nahuatl and Tenek – that are as different from each other as English and Turkish,” says Rosenthal.

(left) Arroyo Xontla near San Andrés Chicayotla, in the municipality of Calnali. One of the few localities for the endemic highland swordtail. (right) A view of the area around Calnali where CICHAZ is located. In the distance is La Aguja (The needle), the highest point in the area at 1400 meters. (Both photos by Rhonda Struminger)

In terms of research, Rosenthal can sum up a major attraction of the Sierra y Huasteca in one word: swordtails; small, livebearing fishes native to local streams. Most of the work at the station focuses on natural hybrids between the highland swordtail, Xiphophorus malinche, and the Huastec or sheepshead swordtail, X. birchmanni.  While geneticists have long studied artificial hybrids between swordtail species, there were no documented cases of hybridization in the wild. “I first came to Calnali in 1997 while doing my PhD dissertation. A group from the American Museum of Natural History had been here in the 1980s and found two species that co-occurred but didn’t interbreed. But when I sampled there, hybrids were everywhere,” he recalls.

Rosenthal and Struminger developed the field station over time. “Gil became friendly with Arnulfo Lara Oviedo, a local politician and social-justice advocate, when he started studying the local swordtail population. In 2005, Arnulfo’s brother and sister-in-law sold us the property,” says Struminger. The field station has been in operation ever since. CICHAZ will be celebrating its 15th year in 2020. 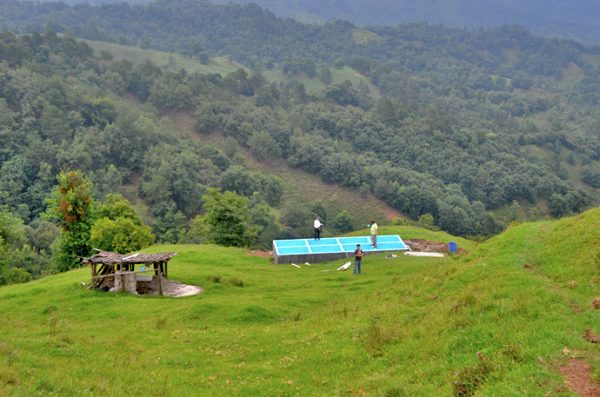 Students and workers setting up experimental swordtail habitats near Ahuacatlán, in the municipality of Calnali (Photo By Rhonda Struminger)

So far, research at CICHAZ has resulted in over 75 scientific publications. “We were able to show that there were changes in the water chemistry that triggered hybridization in the 1980s,” says Rosenthal. “At the time, Mexico had the world’s fastest rate of population growth, particularly in rural areas like Calnali. Between cattle ranching, forest clearing, and sewage runoff, we think there was a massive increase in nutrient loads in the water, which ultimately resulted in more dissolved organic matter in the water, like humic acids. Swordtails mainly base their mating decisions on pheromones – the males dance upstream of the females and urinate in their faces. My first PhD student, Dr. Heidi Fisher, showed that when females were exposed to humic acids, they no longer discriminated between males of their own species and males of the other species. So we think there’s a direct link between human impacts and hybridization.”

Thanks to an infrastructure improvement grant from NSF, the station has recently acquired a YSI water quality sonde to quantify proxies of environmental disturbance likely to cause a breakdown in chemical communication, like nitrates and dissolved organic matter.  The grant has also funded other types of improvement like sustainable energy and a state-of-the-art molecular lab.

Thanks to an NSF Long Term Research in Environmental Biology (LTREB) grant, Rosenthal’s group has been able to study long-term changes in hybrid populations, both in the wild and in artificial mesocosms at CICHAZ and at two other locations across an elevation gradient. Since its inception, the station has monitored water temperature in local streams. As expected, hybrids with genes from the cold-tolerant highland swordtail fare better after extreme cold events, and vice-versa.

CICHAZ offers an annual educational outreach program at the field station that gives scientists the opportunity to share biodiversity knowledge and research with the Calnali community. For the last six years, CICHAZ has partnered with local NGO, Asesoría Social Productiva, A. C. (ASPac) that is run by Ing. Gabriela Vázquez, an agricultural engineer, and her husband, Dr. Eduardo Salas Reyes, ASPac’s technical coordinator. “Together we have been able to provide research symposia, workshops, and a guided nature hike to the community. The hikes feature learning stations where a combination of scientists and community members educate participants about the ecosystem and sustainability,” explains Struminger. These informal learning efforts have evolved based on Dr. Struminger’s research on outreach at U.S. field stations.

CICHAZ is beginning a new project this year, looking at the restoration of riparian areas. Working with ASPac, the project will be exploring sustainable ranching to counter the slash and burn method ranchers have been using for generations that lead to erosion, water pollution, and riparian habitat destruction. The approach would set up a 100-meter corridor for experimenting on how to keep ranchers’ cows (and their feces) away from rivers to prevent contamination. Strategies include planting forage trees on the rest of the property and/or diverting river water into cattle troughs. Habitat restoration also aids frogs, insect populations and migratory birds. Maribel Fernandez of Georgia Gwinnett College, a bird expert, will be important to the project, as migrating birds are a big beneficiary of improved riparian habitat health. Other collaborators include Bobby Nakamoto, a UC Riverside PhD student with Dr. Marilyn Fogel who visited CICHAZ for the first time this summer. “He is going to help us get our nutrient flow and river system monitoring up to speed, so we can monitor health of the habitats here, not just for the swordtails but also for migratory birds,” Rosenthal notes. “We plan to set up stations in riparian habitats, monitoring water quality there; there is a lot of interest in water quality throughout the community.”

Thanks to the initiatives of ranchers who want more sustainable practices and our research initiatives, change is happening. “With the new riparian habitats research, we will interview local ranchers and set up focus groups to understand better how the science impacts the community, and if we can collaboratively improve the riparian environment,” says Struminger.

CICHAZ is open year-round and the region is full of intriguing subjects to study. “We’ve really only scratched the surface,” says Rosenthal. Natural scientists, social scientists, parasitologists, and social anthropologists all can find things of interest at the biological field station.

“We would also like to establish virtual collections of all the flora and fauna,” says Struminger. “We’d love to have more people down here doing research.”