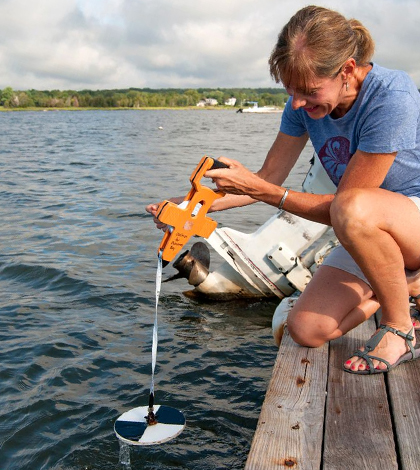 Armed with sampling poles, toolboxes and a couple months of inviting summer weather, citizen scientists of many different ages and backgrounds come together each year from May to September in Buzzards Bay, Massachusetts, eager to help monitor the bay’s health.

“We organize them in May,” says Jakuba. “They get handbooks and data sheets and we assign them sampling sites to go to for data gathering.”

“They enjoy participating and we get valuable data we wouldn’t be able to get otherwise,” Williams adds.

Volunteers are given metal sampling poles which were once made in-house by Coalition staff, but recently have been upgraded and made by a local fabricator out of stainless steel. These poles hold two sampling bottles with rubber stoppers and are dropped to a certain depth in the bay.

Instructions are provided for all testing procedures, including calculating salinity and determining dissolved oxygen using the Hach kit. Handbooks also explain the importance of checking for weather and tides using a Beaufort scale, which expresses how windy and wavy conditions are.

“The chemistry and the importance of following the instructions for accuracy are emphasized to our volunteers,” says Williams. Samples are taken every five days during the May-to-September sampling period. For two days in July and August, water samples are collected and delivered to a partner lab to be tested for nutrients. For those samplings, volunteers get additional bottles, ice packs to preserve the samples, syringes and a filtering apparatus for removing particulates.

At training sessions at the beginning of each season, volunteers get pre-printed data sheets which they submit each week with testing results. Jakuba, Williams and an assistant do all the water quality assessment and data analysis using information they get from those volunteer data sheets.

“If citizen scientists see anything unusual, they are supposed to call one of us immediately,” Williams emphasizes. “We will then look to see if just that one person found unusual data, or if it’s a trend we see with other sampling sites. Sometimes there was just some sort of sampling aberration. Other times it’s a real trend that we need to keep an eye on.”

Scientists at the Ecosystems Center at the Marine Biological Laboratory in Woods Hole, Massachusetts do the analytical work for the nutrient samples. They also provide technical support to the program.

“Buzzards Bay was designated an Estuary of National Significance in 1985. In 1991, a management plan was designed for it. It was clear even back then that it would need a long-term monitoring program,” Williams recalls. “In 1992, scientists from the Woods Hole Oceanographic Institution, the Buzzards Bay National Estuary Program and the Buzzards Bay Coalition citizens’ advisory group came up with a plan in which citizens were critical for gathering data. The reason the plan relied on citizens was because simply to collect so much data required many hands to do the data collection and it would get local communities involved.”

“We have over 140 volunteers each year,” Jakuba explains. “The beauty of the program is not only do we get a lot of data that wouldn’t have been possible to obtain any other way, we also get the public involved. Some of our citizen scientists come back year after year and the program spreads when people share their experiences with Buzzards Bay Coalition and get other people excited about it too.” Williams has been working for the program since 1996. Jakuba joined in 2011.

“We’ve been constantly recruiting volunteers,” Williams says. “In addition to sample collection, we also accept volunteers to help with many other activities at our office.”

Volunteers are told upfront about the time commitment involved in sampling: The volunteer needs to commit to sampling for the entire collection period. About an hour of sampling is required per day.

“The time commitment is not an issue for most people. They don’t mind and are happy to do it,” Williams says. “We get people from all kinds of backgrounds. Many are non-scientists but we get scientists too. Sometimes we even get whole families. Usually our volunteers are high-school age or older. We take people of all educational levels. The program is really quite user friendly. I’m the one who typically does the volunteer coaching. Some need a little more hand-holding than others, but in the end most jump on board and collect data for the whole duration.”

Among the few requirements for volunteers are that they must be vigilant when using equipment and able to stand or work on a dock, pier or bridge to take samples. Some volunteers, especially those gathering nutrient samples, go out in boats to sample.

In the future, Williams and Jakuba may equip volunteers with additional instruments for point measurements of dissolved oxygen, chlorophyll and temperature. In 2016, there are also plans to expand on a monitoring buoy located in the central part of the bay.

In terms of data uncovered by citizen scientists, the Buzzards Bay team has found that the nitrogen levels in the bay have been generally consistent, but chlorophyll and temperatures keep getting higher. There has also been a higher density of phytoplankton over time.

Williams and Jakuba have heard from volunteers who say they can remember years ago when they could see to the bottom of the harbor, but they certainly can’t do that now.

“The bay has changed,” says Williams. “I don’t think anyone would deny that.”