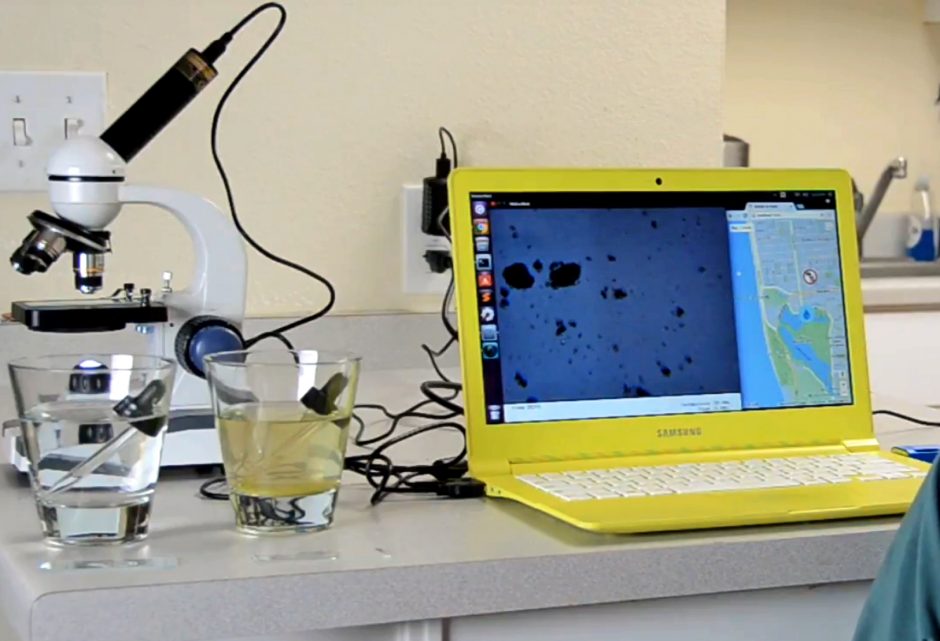 In a world where billions of people are still affected by waterborne disease, yet advanced technologies flourish more every day, many scientists, engineers, and developers are working to apply new technologies to old problems. Water quality testing is a perennial challenge that is surprisingly difficult to handle; testing tech exists, but it takes money to buy, which is scarce where it’s most needed. It also takes time to use—and no one can go without water for long.

The answer to these issues would be cheaper, easy to use methods for testing water for contaminants such as bacteria that provided results in real-time. This sounds simple enough, but remains a knotty problem. Now, developer Peter Ma is trying to apply the latest in handheld artificial intelligence (AI) in the form of the Intel® Movidius™ Neural Compute Stick to that problem. The result is his Clean Water AI solution.

Ma spoke to EM about Clean Water AI, which he developed for a hackathon.

“This was part of the World Virtual GovHack, which was itself part of World Government Summit,” explains Ma. “It was one of the biggest virtual hackathons hosted, with $450,000 in total prize money. One of the challenges for the hackathon was Clean Water and Food Scarcity. Knowing that clean water problems exist even in the United States, and wanting to put my expertise in AI to use, my team and I wanted to build something that used AI to detect water contamination. We knew bringing E. coli and cholera to different demo sites might be dangerous, so we used tea leaf cells as a classification tool for the proof of concept. We won the Grand Prize.” Clean Water AI identifies contaminants like E. coli bacteria or lead particles in real-time using the Intel® Movidius™ Neural Compute Stick, a laptop running the open source Ubuntu* operating system, and a microscope. It detects the shape of the molecules using the microscope, and maps the findings to alert people local to the water source and keep track of trends. This process plays into one of AI’s biggest strengths: pattern detection and recognition.

“Each bacteria has a different shape, so under the microscope it’s very easy for AI to identify different strains,” details Ma. “This allows the AI convolutional neural network (CNN) to classify different kinds of bacterias that are in the water, and we can monitor them in real time.”

“Viruses are 10 to 100 times smaller than bacteria, so this will require different set of microscopic cameras,” remarks Ma. “Our proof of concept focuses only on bacteria, but we do plan to detect for viruses when we build out the entire product. The AI classification will allow us to train the system for different kinds of bacterias and particles as we develop it.”

In this first round iteration, Ma isn’t certain how much of a contaminant must be present for the AI to detect it.

“This is a very good question, and currently I do not have an answer, but the final product will allow flowing water to pass through the optical camera, so it won’t matter much about the quantity as we will be able to detect contaminants as they are flowing through the camera,” Ma explains. “Once detection is made we can easily warn the system and take actions to stop the contamination from spreading.”

One of the strengths of this system obviously is its low cost, but the fact that it is easy to use is just as important. Ma anticipates both individual people without much special training using it, as well as agencies and municipalities.

“We want to make the final version of the product as easy to use as possible,” adds Ma. “It would first be deployed by municipalities into water sources, and since each device is geotagged, we want the device setup to be as simple as setting up lightbulbs in your smart home. Once municipalities and developing countries implement them into water sources, we can then develop specialized versions, fitting them into water pipes. We also hope to produce a consumer version, so everyone can monitor the water that’s flowing into their households.”

Ma developed the current system using Intel AI Academy’s Devnet to train the AI model, and deployed after training onto an Intel Movidius Neural Computing Stick. From there it detected the bacteria in real time with the help of the microscope camera. “We used Caffe Framework to train the model, and the Movidius NCS SDK to monitor it,” remarks Ma. “For the second stage of proof of concept we will be using the Up2 board, also powered by Intel, and the entire prototype build will cost under $500. I will be writing up the guide on how to build Clean Water AI on hackster.io and Instructables.com in the near future, so look out for it!”

AI and the future of water quality

The Clean Water AI test system represents a new way of thinking about real-time water quality testing and monitoring. Made up of relatively low-cost, simple components that can be purchased off-the-shelf, it needs only a digital microscope, a computer running the Ubuntu OS, and an Intel Movidius Neural Compute Stick (NCS). This means the setup can be built for less than US $500.00. The NCS is a big piece of this puzzle, making AI more accessible for more people.

Gary Brown, Intel’s Movidius Marketing Director from the Artificial Intelligence Product Group, corresponded with EM about the Clean Water AI test system and the NCS. One of the big advantages of the NCS is accessibility; the cost of the stick is low, so potentially almost anyone can get one and use it for research or developing a new application.

“We designed the Intel® Movidius™ Neural Compute Stick (NCS) with corporate and academic researchers, and also makers in mind,” explains Brown. “We saw the need for prototyping and developing with AI, and specifically Deep Learning. We wanted to launch a devkit that would not only make it easier for them to develop, test and deploy AI applications, but also to get real-world results on the Intel Movidius low-power VPU.”

Obviously offering lower cost, more easily accessible creates a win-win situation for users, but also for Intel; as more people develop working applications, Intel gets more information about how their systems function. By paring down what a system needs to run AI, many new applications become possible.

“Stepping back at a high level, developing machine intelligence applications takes two steps: (1) you first need to train your algorithm on large sets of sample data via modern machine learning techniques – that’s called ‘training’ –and next (2) you need to run the algorithm in an end-application that’s interpreting real-world data – that is called ‘inference’,” details Brown. “The NCS allows the inference application to be performed natively inside a device, which brings the benefits of lower latency, lower power consumption and privacy. The NCS can run deep learning inference offline, which opens up a lot of interesting research applications for those working in-the-field without wifi. For example, can you imagine how cool it would be to explore the deep sea in a vehicle equipped with a Deep Learning devkit that could sense the visual world and run analytics algorithms in real-time, all without network or cloud connectivity?” System in use. (Credit: Screenshot, video from Peter Ma)

Users don’t need extensive specialized AI or machine learning (ML) knowledge to use the NCS for research or practical applications. For most research scientists and engineers, getting up to speed would be within reach, especially if they weren’t interested in created and training their own algorithms from scratch.

“If users are plugging the NCS into either a laptop or Raspberry Pi and want to get started with example deep learning algorithms that are pre-trained, then it’s fairly straightforward for users who have some computer or maker tools experience,” states Brown. “For advanced users who want to train a new AI algorithm then it takes a little more experience. For example, marine biologists without prior AI or Machine Learning experience would need to patiently come up to speed with the NCS out-of-the-box examples before venturing to build and train their own deep learning algorithms.”

For working scientists and engineers who want to dive in and get into using this kind of AI tool in their research, there are plenty of opportunities. One at Intel in California is coming up this month.

“As part of the Embedded Vision Summit conference in Santa Clara May 21-24, we’re presenting a computer vision workshop on May 24 aimed at engineers, researchers, and software developers who develop computer vision and machine learning applications and want to benefit from transparent hardware acceleration,” adds Brown. “Researchers can also visit https://developer.movidius.com to find out more about the NCS, including how to get started, how to access many sample projects, user forums for support, and purchasing information as well.”

In the end, as Ma’s Clean Water AI illustrates, there are potentially endless ways to put robust data analyzing tools like AI algorithms to work in the realm of water quality. Classification of types of contaminants, species, sediment patterns, or almost anything else lends itself to this kind of tool—and AI can provide this kind of analysis in the field in real-time.

“In a recent Environmental Monitor article on the deep sea exploration of the Canadian coast, there was a vehicle sent to the bottom of the ocean to explore capturing video live to explore the various creatures living in the deep,” adds Brown. “Wouldn’t it have been interesting if live video feed were being analyzed in order to classify objects (namely fish species) in real time inside the vehicle with a neural compute stick? AI algorithms like the neural networks we run on the NCS can be very accurate…and that’s an example of amazing potential projects we can look forward to with NCS.”