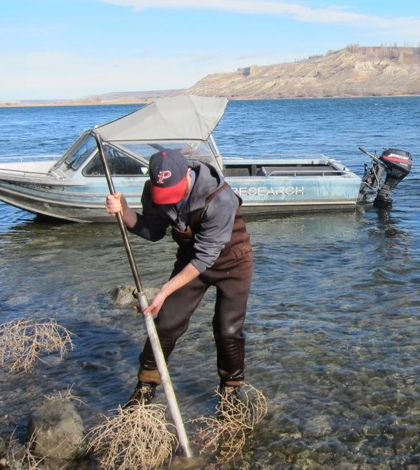 But the hyporheic zone, also referred to as a “river’s liver,” is an area that deserves study, as it is where contaminants, such as nitrate, can be filtered before being transported downstream and where large amounts of greenhouse gases are naturally released.

The hyporheic zone can be responsible for up to 90 percent of the metabolic activity of a riverine system. Learning more about how the hyporheic zone works, scientists believe, is important for determining how rivers will react to future conditions as the climate continues to change.

Perhaps in part because of its complexity, the hyporheic zone has not been widely researched. James Stegen, senior research scientist in the Earth and Biological Sciences Directorate at the Pacific Northwest National Laboratory (PNNL), along with a dedicated PNNL research team, has been working to change that.

“We’re learning how biogeochemical processes in the hyporheic zone are coupled to hydrology so we can predict how environmental perturbations, such as climate change, will affect the fate of contaminants and the cycling of carbon and nitrogen,” says Stegen.

But what goes on in the hyporheic zone is partly a function of microbial action.

“The river rises,” Stegen says, “and microbes that were once relatively dormant suddenly get a huge influx of organic carbon as the river water flows in. The river water has little bits of leaves, dead fish and other detritus. The microbes take the organic carbon and turn it into carbon dioxide, methane and nitrous oxide, all greenhouse gases. By understanding these processes, we can better understand the planet’s carbon cycle.” Scientists call the area along a river where river water and groundwater mix the hyporheic zone. The circular inset illustrates some of the features of this zone, including tiny grains of sediment, water from both sources mixing, and the microbes that actively ply these waters and sediments. (Courtesy: Pacific Northwest National Laboratory)

In their quest to understand what goes on in the hyporheic zone, Stegen and other researchers relied on an array of equipment.

Custom-built piezometers were used to determine groundwater-river water mixing conditions across a range of depths and times. The piezometers consisted of metal tubes with perforations that were wrapped on the outside with screens. They were installed along the Columbia River shoreline in a series of locations and were typically 1.2 meters long and 2 inches in diameter, though others were only 5 inches long to allow dataloggers to sample specific depth intervals.

Piezometers were driven into the riverbed by hand or jackhammer as much as 3 meters down below the riverbed.

“The geological formations limited us to about 3 meters,” says Stegen. “The sediments become too tightly packed below that depth and the piezometers just stop moving. You’d need a drilling rig to get underneath it, but a drilling rig was out of the question on the shoreline, since we didn’t want to disturb native (indian) artifacts.”

In order to collect groundwater and the microbes within, Stegen and others used submersible Grundfos pumps to gather sample water. They also used Sterivex polyether sulfone (PES) filters to collect microbes. A custom manifold was used which allowed them to collect samples at several depths simultaneously. Filtered water was collected and preserved in the field. Filters, full of filtered-out microbes, were frozen and preserved for DNA extraction.

DNA was processed using 16S gene sequencing via an Illumina MiSeq sequencer. It was not an easy task. “Hyporheic systems might be the most microbially diverse of all systems,” says Stegen.

Microbial complexity aside, the research was complex simply because of the mixing of groundwater and river water.

It’s also possible, he says, to use electrodes placed on the land surface to track mixing conditions in the hyporheic zone. His team placed some about 5-10 meters apart, which told them the relative concentration of groundwater and river water in 3-dimensional snapshots recorded through time. To gather riverbed sediment samples, Stegen and his team used freeze coring, but only when the river was cold. To take a freeze core, a metal tube with a closed point was driven into the riverbed. Liquid nitrogen was poured into the center of the tube, and a 5-10 centimeter “frozen popsicle” of sediment would form around it. The tube and popsicle could then be pulled out of the riverbed with a winch and the sediment core stored on dry ice.

Another technique utilized by Stegen and the other researchers was Fourier Transform Ion Cyclotron Resonance (FTICR) which was available via the Department of Energy (DOE)’s
Environmental and Molecular Sciences Lab (EMSL). The FTICR gave highly resolved masses which showed shifts in carbon composition.

It was a different situation with the filtering of nitrate pollutants in the river’s hyporheic zone.
“There, denitrification was not a strong player. In other words, microbes weren’t driving the removal of nitrates. Instead, it was a process simply dominated by water mixing,” Stegen explains.

Speaking more on the topic of the hyporheic zone, Stegen says that the size of a hyporheic zone can vary a lot. “It can be up to 300 meters inland from the shoreline,” he says. “In the Columbia, we have a big hyporheic zone. We are working to understand it through research at different scales, from decimeter-scale lab experiments, to kilometer-scale field studies, to watershed-scale modeling.”

Hyporheic zones can also be rather dynamic. This past year, the Columbia was really low, with groundwater discharging into the river and a smaller hyporheic zone than usual. The zone can sometimes change daily, so researchers are trying to use more geophysical measurements to pin it down better.

From there, Stegen and his team want to focus on building predictive models. “We want to predict the amount of carbon and nitrogen that gets cycled through the system, the fate of contaminants and the effects of climate change,” he says. And he hopes to see more “omics” work to better link microbes to biogeochemical processes. “Metagenomics, proteomics, transcriptomics, metabolomics and others. These methods are getting better and better and more applicable to the kind of systems we study.”

The team would also like to do some large-scale atmospheric work through the DOE’s Atmospheric Radiation Measurement user facility.

“Ultimately we would like to connect groundwater-river water mixing to biogeochemical activity in the hyporheic zone,” says Stegen. “Then we can better predict what will happen in the future in response to ongoing climate change.”