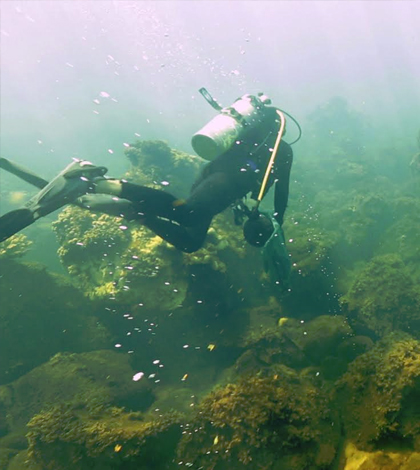 As climate change continues, scientists have attempted to investigate some of the effects of future climate trends in the lab. Some of the trends they have tried to simulate include the effects of higher temperatures and ocean acidification on corals due to increased carbon dioxide. Although lab simulations give some information, they typically can’t provide all the facets of the natural system they are trying to simulate, so they can’t explore the effects of climate trends as completely as they could in a natural coral reef setting.

Recently, however, researchers attempting to explore what the effects of increased carbon dioxide might be on the coral reefs of the future received some assistance from deep within the Earth: volcanic vents spewing out high levels of carbon dioxide near coral reefs, high enough to simulate carbon dioxide levels expected in the future in the areas near the vents. These natural areas were found off the uninhabited islands of Maug in the Northern Mariana Islands of the Pacific, about 450 miles from Guam.

Ian Enochs, a scientist with the National Oceanic and Atmospheric Administration’s Cooperative Institute for Marine and Atmospheric Studies at the University of Miami, Florida, led the research where volcanic vents showed him and other researchers what the future of coral reefs is likely to become at higher carbon dioxide levels: areas dominated by algae and greatly stripped of their beauty, biodiversity and habitat benefits.

Some researchers in the Mariana Islands had alerted Enochs to bubbles rising from the sea floor, which he was quickly able to determine were carbon dioxide bubbles. Intrigued, Enochs applied for funding to study the area and thus his research project became the “living lab” of volcanic vents and coral reefs off the islands of Maug. Enochs explains, “The area is not an active volcano, but it’s an underwater caldera. We were able to sail our research boat right into the caldera. There is still some mild volcanic activity in the form of carbon dioxide vents which create localized ocean acidification. That’s what we focused on in our study.”

Acidification was monitored using Satlantic SeaFET high-resolution and low-drift pH logging instruments. These SeaFET sensors take more stable measurements than glass-bulb pH sensors that can foul easily. Enochs set them up to operate over a period of three months. LI-COR LI-820 CO2 Gas Analyzers were used for carbon dioxide monitoring. Photosynthetically active radiation was also measured in the study, and Enochs used some custom equipment on his research boat as well.

Enochs observed that, of all the different volcanic vent areas, it was clear that those with high levels of carbon dioxide were taken over by algae, which is considerably less valuable from a biodiversity standpoint than coral reefs are.

Enochs further explained how the changeover from coral to algae occurs: Ocean acidification tends to have the effect of slowing coral growth and calcification it needs to build reefs, but acidification has the opposite effect on algae. It encourages algal growth. A healthy coral reef on the left and the volcanically acidified algae-covered habitat on the right. (Credit: C. Edwards and M. Fox)

Pictures show the dramatic differences between areas in Maug that have low to moderate carbon dioxide levels, as those are teeming with coral reef life including an abundance of colorful fish, compared to the areas with high carbon dioxide, which are relatively barren of life and are a dull algae green. In addition to regular photos, Enochs’ team also uses photomosaic images to show the differences between the high carbon dioxide areas and the lower carbon dioxide areas of Maug. Photomosaic images are thousands of high-resolution images made into high-resolution maps 10 meters by 10 meters in size. Canon digital SLR cameras with underwater digital capabilities are used to make them.

In addition to Maug, some similar sites exist around the world, such as a site in Japan which has shown a transition from hard coral to octocorals, which are leathery soft corals that do not produce hard coral reefs. Another site in Papua New Guinea shows increased algae with increased acidification but not as drastic as what is seen in Maug.

Enochs emphasizes that what is unique about the Maug site is that it is the first real world example where predicted effects of a shift from hard coral reef completely to algae due to increased acidification has been seen.

“All scientists have a desire to better predict and understand changes in beautiful environmental systems such as coral reefs,” said Enochs. “They are priceless. Once they are gone, we won’t be able to get them back.”