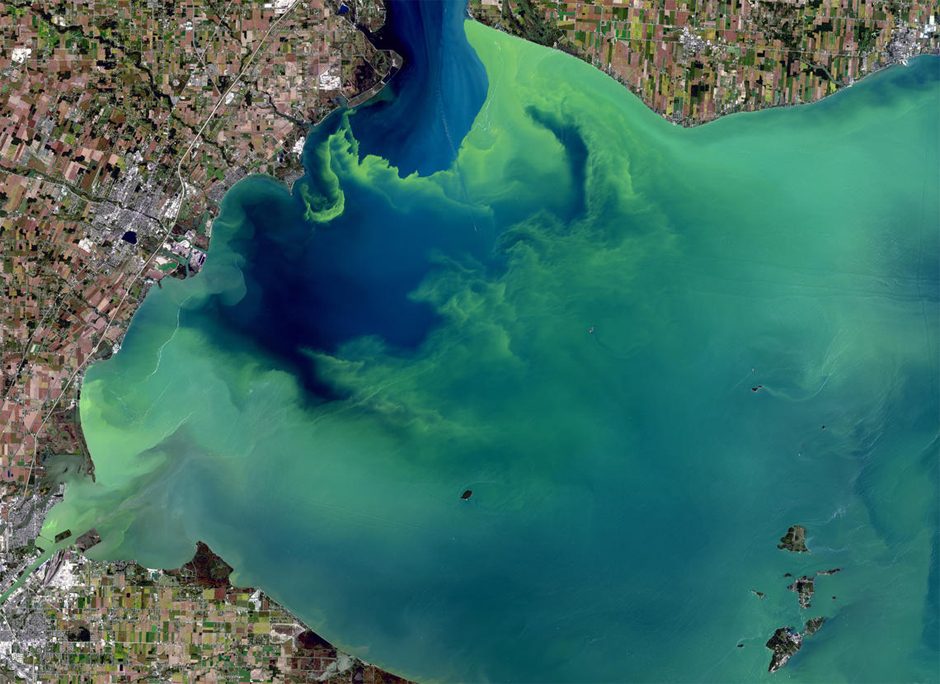 In 2014, the Toledo Water Crisis left about 500,000 people without access to safe drinking water for several days. Since that time, the city has been working hard to combat harmful algal blooms (HABs), and so has Dr. Jason Huntley of the University of Toledo. Dr. Huntley spoke to EM about his recent work searching for bacteria that occur naturally in water and are safe for humans—but not for microcystins that cause HABs.

“Before I started this project, I had no idea how many millions of gallons of water the City of Toledo purifies from Lake Erie,” comments Dr. Huntley. “It’s actually an amazing amount of work that they do day in and day out.”

In his search for a sustainable answer to the HAB problem, Dr. Huntley learned how the city processes water for drinking.

“The City of Toledo and most water treatment plants use huge bio-filters that are the size of a house, and they have 30 or 40 of them,” explains Dr. Huntley. “They’re biologically active sand filters; they actually run water through them for days or weeks, different bacteria grow on these filters to activate them, and that helps naturally detoxify the water.”

This is how Dr. Huntley and the team came up with the idea that certain groups of bacteria could degrade microcystins. Now his team has identified groups of microcystin-degrading bacteria and their ultimate goal is to prove that the bacteria are safe and efficient enough to use in municipal sand filters. It’s an interdisciplinary process.

“The University of Toledo is a unique place to do this because we can’t do it by ourselves,” details Dr. Huntley. “We have our department, which is medical microbiology and immunology. We also have a college of engineering, including people who specialize in water filtration, filtration systems, and the design of water treatment plants. We’ve been working with those engineers and bio-engineers during our studies.”

The researchers have also been in touch with the Ohio Environmental Protection Agency (OH EPA).

“They are obviously concerned about microcystin in the water, but they also regulate water filtration and water delivery,” Dr. Huntley describes. “I first bounced ideas off the OH EPA to make sure that they were okay, in theory, with our plans. They gave me useful suggestions from the beginning. As we gathered more and more data and confirmed that our bacteria could degrade microcystin, they, in turn, gave us a few more suggestions for things to check and things to try. So it’s been a really active process involving the City of Toledo water treatment plant, the OH EPA, various engineers, and many people.”

HABs are a complicated problem plagued by nutrient inputs into waterways, climate change, and a number of other factors (some currently being studied; some unknown), so interdisciplinary partners are best suited for solving it. 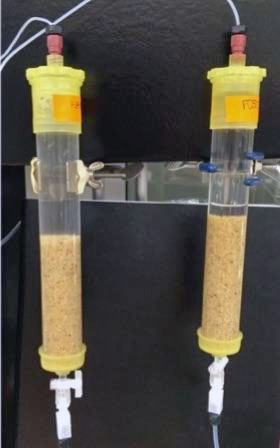 “If you look all the way back to the Dust Bowl days and the Agricultural Revolution, there have been people concerned about land use, nutrients, and water,” remarks Dr. Huntley. “However, the problems have gotten more complex and some of those concerns have been siloed. One person might focus on nitrogen in the soil, another phosphorus, another on no-till, another on manure use. I’m a newcomer to the HAB field but have been impressed by the collaborative approach by many groups to slowly reduce all of these issues and attempt to solve the larger problem.”

A new way to treat water

“Each of those processes generates byproducts, including toxic substances such as formaldehyde, which then have to be further mitigated through other treatment processes,” states Dr. Huntley. “That involves still other chemicals, or activated charcoal, that adds to the cost. The increased cost is a problem for the water consumers here in Toledo, and the additional hazardous waste that the City of Toledo has to get rid of is a problem for everyone.”

The advantage of Huntley’s method is the ability to simply bypass all of these additions.

“Forget chlorine and all the other microcystin removal processes,” Dr. Huntley says. “All we’re doing is adding to an existing, naturally active process that removes the toxin from the water. Energy is needed to power UV lights or chemicals such as chlorine are added to breakdown microcystin. Using our approach, it’s just naturally-occurring, safe bacteria.”

“We just add them to the existing filters and they chew up the toxin into non-toxic breakdown products, free amino acids,” adds Dr. Huntley. “That’s it; it’s pretty simple. No energy needed other than what it takes to grow the bacteria.”

The team is using highly characterized bacteria that naturally occur in water, they are not known to cause human disease, and they are not genetically modified in any way.

“We’re doing some follow up studies—actually putting these bacteria into different animal models, to make 100% sure that they are not capable of causing human disease,” confirms Dr. Huntley. “We’re aware of the public perception, and we want to get out ahead of that. We’re also going to make 100% sure that these are not going to cause disease at all. And finally, the backstop is chlorine added to the water before it goes through the pipes to your house. So, there won’t be any bacteria in the drinking water.”

Although these are safe, friendly, bacteria, the team is working with the OH EPA to help the public understand and remain receptive to this technology.

“I think if you went down the street and generally polled people they probably wouldn’t be too open to us adding bacteria to their water, but let’s put this in perspective,” remarks Dr. Huntley. “Yogurt and probiotics are very popular right now. I think that the tide is turning there. I think we need to explain how the water treatment process works, which is that we are adding bacteria to a filter, and chlorinating it immediately after that.”

In search of the right enzyme

The team took a systematic approach when selecting varieties of bacteria to trial.

“We’ve been collecting harmful algae bloom samples for three or four years,” explains Dr. Huntley. “We take them back to the lab and we add microcystin continuously for four, six, eight, sometimes ten weeks. Basically, we’re pushing evolution, so that it naturally selects for a small number of only the fittest bacteria.”

Initially, the team identified around 60 bacteria and sorted them into groups randomly. 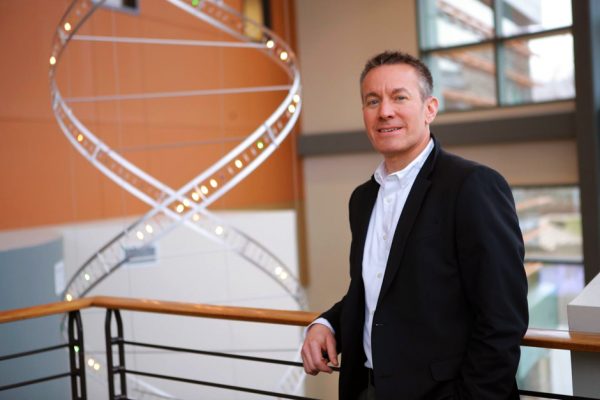 “Groups of 20, groups of 10, we went through this down selection process to get to the fewest number of bacteria we could,” details Dr. Huntley. “We’re down to groups of three or four bacteria, that together degrade microcystin right now. We’d like to get down to one, and that’s what the regulatory agencies are really pushing for.”

The next step will be identifying just that enzyme that chews up microcystin.

“Then, as you can imagine, you could just add a droplet of a concentrated enzyme to the water,” comments Dr. Huntley. “Or you put a tablet in water if you’re out hiking. That’s what we ultimately want to get to so that people aren’t worried about the bacteria and we just have the purified enzyme, a pure way to degrade microcystin.”

“So to be clear, it’s not like we publish that paper and we’re done,” adds Dr. Huntley. “We’re continuing to work through and really focus on a solution.”

Stabilizing any enzyme the team identifies and other kinds of analysis will also probably be part of the process in the future.

“My lab does a lot of biochemistry, those types of analyses, and you definitely have to think carefully about that,” confirms Dr. Huntley. “Once we identify that enzyme, we’ll conduct analysis to determine whether it is stable in the water all by itself, or whether it has to be attached to something else to make it stable, things like that. It’s just difficult to predict right now.”

The team’s next challenge is scalability.

“The beauty is these bacteria literally grow in lake water, but that’s our big challenge: partnering with someone who can grow tanks of microcystin-degrading bacteria,” states Dr. Huntley. “Growing enough bacteria to actually test it at the Toledo water treatment plant, or Cleveland, or Cincinnati, or any other place around the world that has harmful algae blooms. China has chronic problems, Australia, France, England. Again, we’re not just focused on Toledo or just Ohio. This is a worldwide problem. And, people drink microcystin contaminated water from all those places worldwide, too.”

Meanwhile, Dr. Huntley and the other researchers will continue to reach out to other experts across disciplines.

“I’m not the smartest guy in the world, so I know we’re going to have to partner with other people to help us solve these problems,” remarks Dr. Huntley. “We’re definitely going to be reaching out to bio-engineers, chemical engineers, and biochemists, to help us work through problems and actually make this work for water treatment.”