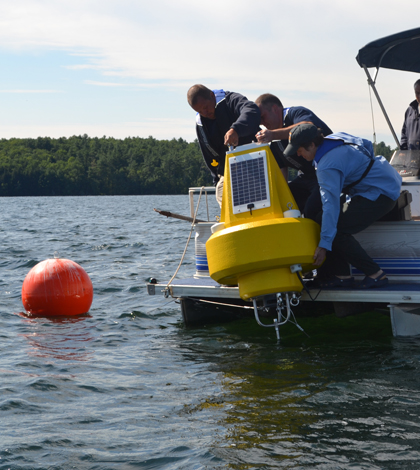 The water in Lake Auburn in Southwest Maine is so clear that drinking water managers don’t have to filter it before sending it through the faucets in the cities of Auburn and Lewiston.

But a recent uptick in algae blooms–including one in 2012 that resulted in early fall anoxia and the death of more than 200 trout–has the water district concerned it could one day lose the waiver that exempts it from filtering requirements.

“They’re really worried about maintaining water quality to keep the filtration waiver and to be able to continue to deliver high quality water,” said Holly Ewing, an associate professor of environmental studies at Bates College in Lewiston. “Building and maintaining a filtration plant would require borrowing money and in the end likely more than quadruple the cost of our water,”

A collaboration between the Auburn Water District and Bates College this summer brought a water quality monitoring buoy to the lake that should bolster scientific understanding of how the waterbody functions. The continuous data will give researchers a better grasp of process that affect the water’s clarity and the health of the coldwater fishery.

The project came about after Ewing’s research collaborations on buoy-equipped lakes in the region demonstrated the value of long-term, high-resolution data. She contributed to a study on the effect of Hurricane Irene on nine lakes throughout New England. Strings of temperature sensors suspended from buoys helped show the how the extreme weather altered the lakes’ thermal structures.

Ewing also has experience with one of the algae species causing trouble in Lake Auburn: Gloeotrichia echinulata. Blooms of this cyanobacteria have become much larger recently both in Lake Auburn and other northeastern lakes where scientists have not previously noticed them.

“It’s a species that normally shows up in lakes with higher nutrient concentrations and it’s showing up in these low-nutrient lakes,” Ewing said.

The species fixes nitrogen and removes phosphorous from the sediment, and so may be able to change the way nutrients move in the lake. To get a better picture of what’s happening in the lake and how it relates to issues such as anoxia, algal blooms and lake mixing, Ewing worked with the water district to install a buoy monitoring system. The buoy supports a string of thermistors that measure temperature at 13 depths ranging from a half-meter to 32 meters down. Dissolved oxygen concentration and saturation is measured at three depths. They also added a photosynthetically active radiation sensor to the district’s weather station.

By combining the data from the buoy with other parameters already monitored by the water district, the researchers hope to understand the thermal structure of the lake, where and when it becomes anoxic, and what happens with nutrients when that happens.

“This is an important lake. It’s really valuable as a drinking water source,” Ewing said. “We need to see what we can do to better understand the processes that are occurring in this lake that we can only understand with continuous data.”