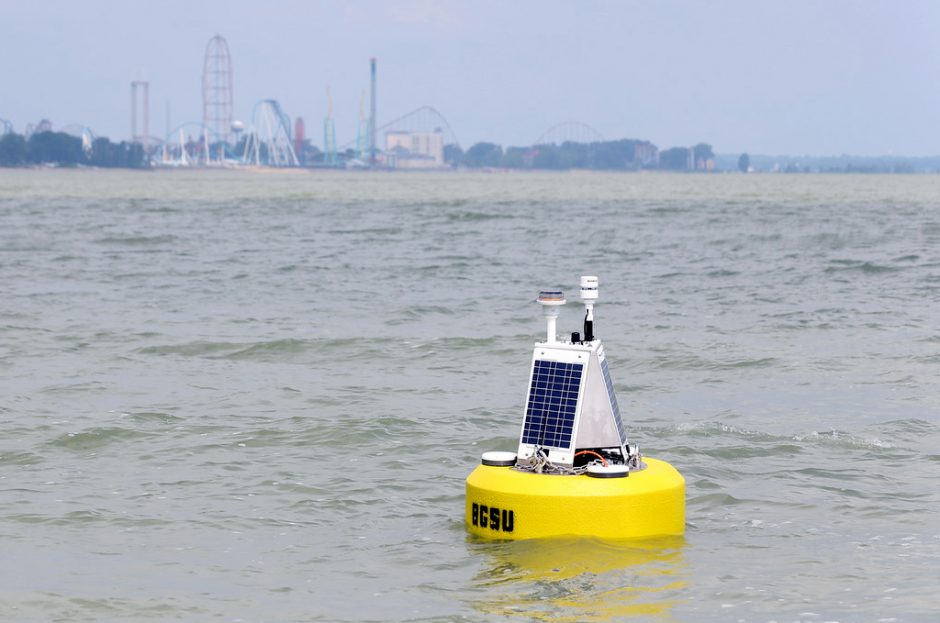 What started as a study into a relatively unexamined type of cyanobacteria has turned biologists from Bowling Green State University into an integral part of the effort to monitor and protect the drinking water in Sandusky, Ohio.

Dr. George Bullerjahn, the Professor of Research Excellence at Bowling Green State University, has done considerable work in the study of beneficial cyanobacterial organisms in the eastern and central basins of Lake Erie. His current project is focused on the growth of the toxic cyanobacterium Planktothrix in Sandusky Bay.

Over the course of his career Bullerjahn has collaborated with Dr. Steven Wilhelm from the University of Tennessee.

“From several discussions about Steve’s previous work and our collaborations, it was clear that the nearshore blooms in Lake Erie embayments were different than the western basin Microcystis blooms. The nearshore blooms were caused largely by Planktothrix,” said Bullerjahn. “Both are cyanobacteria but they are very different. This prompted the question, what is it in the near and offshore environments that selects for two very different toxic bloom formers?”

Bullerjahn wanted to find out.

In 2013, Bullerjahn and fellow BGSU biology professor Mike McKay, along with a team made up of biology students from BGSU and scientists from NOAA and Michigan State University, began studying Sandusky Bay through biweekly sampling from defined sites. The team was able to determine that Planktothrix thrives in cooler turbid water, making the Sandusky Bay an optimal environment. The Sandusky River drains into the bay bringing with it sediment that creates a darker, more turbid water than the western basin. Additionally, Sandusky Bay is prone to long-term nitrogen depletion, and Planktothrix is well adapted to a low nitrogen environment.

Although the team was able to ascertain some of the conditions in which Planktothrix thrive, their research was limited.

Shortly after Bullerjahn’s project began the need to study the water of Lake Erie became paramount. In the summer of 2014, Toledo, Ohio faced a water crisis when the city’s main water supply from the lake was contaminated from a toxins produced by a Microcystis bloom. For two days residents were unable to drink the water and children were advised not drink or bathe in it.

“When the Toledo crisis happened, the state responded very quickly,” said Bullerjahn. “Several agencies stepped in. The Ohio Department of Education and Ohio State University came forward with a plan to bring the scientists who were currently studying freshwater ecosystems on board to help address the issues.”

The Ohio Department of Education made the decision to fund the Harmful Algae Bloom Research Initiative, also known as HABRI, in order to fill knowledge gaps and prevent other incidents from happening in the future. HABRI is a $4 million initiative with 30 science teams dedicated to studying the Lake Erie ecosystems. Ohio Sea Grant, which is part of the National Oceanic Atmospheric Administration (NOAA), manages the research. Because Bullerjahn and McKay were already monitoring the Sandusky Bay in order to learn more about Planktothrix, their project received a grant from the Ohio Sea Grant College Program. The purpose of his research was now two-fold, to learn more about Planktothrix and monitor the bay for harmful algae blooms and toxins. This critical funding made the purchase of data buoys and other equipment possible.

The team selected NexSens Technology CB-450 Data Buoys that have an instrument well for data loggers and batteries. They also contain a pass-through pipe for environmental sensors and 10-watt solar panels for powering the buoy equipment.

The buoy systems include Airmar 200WX Ultrasonic WeatherStation instruments that measure air temperature, barometric pressure and wind direction and speed. Beneath the data buoys, in the pass-through, are YSI EXO2 Multi-Parameter Water Quality Sondes that have sensors for measuring water temperature, specific conductance, pH, turbidity, chlorophyll, dissolved oxygen and blue-green algae. One buoy was placed at the mouth of the Sandusky Bay near the water intake, the other inside the bay. The buoys allow for 24-hour water monitoring.

Data gathered by the buoy systems is logged by NexSens iSIC-CB Buoy Data Loggers contained in the instrument wells. The readings are transmitted to a computer running NexSens iChart software. The program works with WQData LIVE, a web datacenter that helps scientists share project information, as well as with the Great Lakes Observing System (GLOS). These portals allow real-time online data acquisition. The information is shared with the BGSU team, Sandusky water managers and the public.

“The buoys allow us to see how the Bay environment and the bloom changes at shorter timescales,” said Bullerjahn.

Because of the around-the-clock monitoring, the team was able to show that Planktothrix is well adapted in environments where nitrogen is limited due to denitrification, which is active in nearshore sediments.

While the team was gathering important data about Planktothrix, they were also monitoring any algae blooms that came within close proximity to the Sandusky water intake at the mouth of the bay.The buoy data allowed the Big Island Water Works Sandusky water treatment facility to adjust their treatment procedures in response to changes in the bloom at the intake site.

“Over the last three summers. I have used the buoy data to correlate our certified microcystin tests with chlorophyll and phycocyanin levels. I have also used the real-time data to adjust treatment seven days a week,” said Orin McMonigle, water services superintendent for Big Island Water Works.

With the day-to-day monitoring under control and important research into Planktothrix yielding interesting results, some plans are being put in place for a long-term strategy.

“All of the monitoring is showing that the Planktothrix behaves very differently than the Microcystis and will require very different strategies,” explained Bullerjahn. “Because we now understand how the bloom behaves we can put plans in place to modify the environment.”

Long-term management of the environment will likely include environmental engineering strategies that may include construction of islands in the bay to mitigate the flow of the sediment from river. Lack of sediment will make the water less turbid and the increase of light will inhibit the growth of Planktothrix.

In the meantime, the BGSU team will keep monitoring the bay.

“We are currently looking into the point at which Planktothrix blooms receive too much light, at what point the blooms will die as a result,” said Bullerjahn. “We have enough data to continue doing this work.”