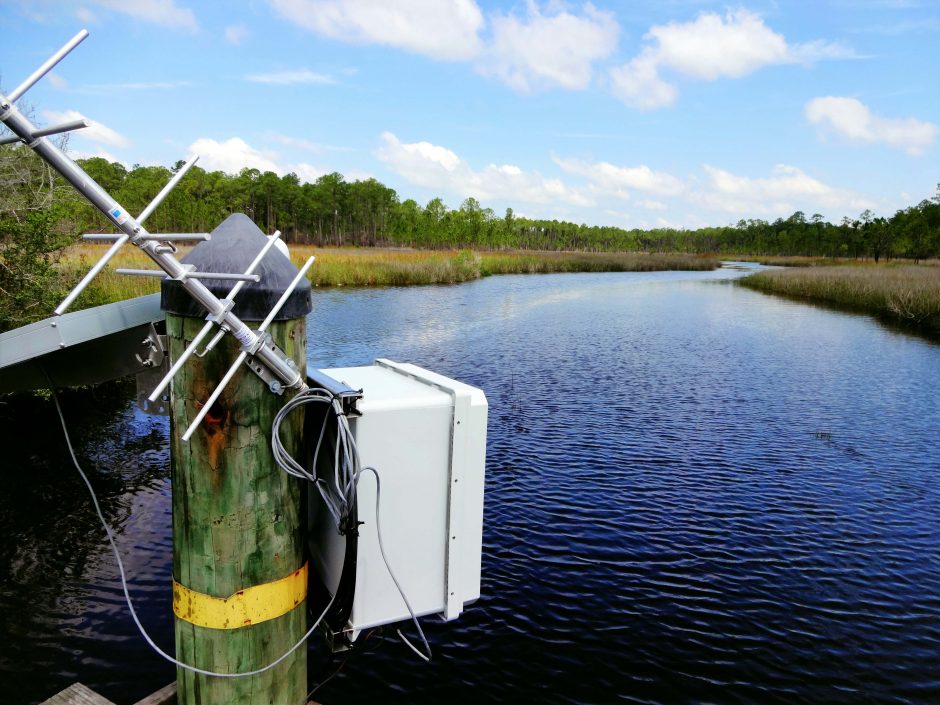 A haven for wildlife watchers, especially birders, Grand Bay National Estuarine Research Reserve (NERR) covers 18,000 acres of salt marshes, savannahs, salt pannes, bayous and bays. For Kimberly Cressman, Grand Bay NERR System Wide Monitoring Program (SWMP) Coordinator, however, fascination with Grand Bay extends beyond its physical beauty and the mysterious creatures that call it home: she is also fascinated by its data, which she is in charge of collecting, analyzing and managing. All 29 NERRS collect data using the SWMP protocol for the purposes of not only tracking the health of the individual NERR but also for comparison with other NERRS to see if trends emerge over different areas of the country. In addition to all the data managing aspects of her role as SWMP Coordinator, Cressman also contributes to the larger SWMP objectives of looking at the effects of climate change and coastal pollution on the NERR, understanding ecosystem processes, ecosystem-based management of natural and built communities, increasing social science research and upholding NERRS management, research, education, stewardship and coastal training efforts through SWMP work.

“I’ve been in this position for seven years,” says Cressman. “One of my tasks is to keep current with the latest monitoring technologies. I can tell you that in the time I’ve worked here, the sondes we have now are a definite improvement on the older version. We went from YSI 6600 series sondes to the EXO2 sondes, and we haven’t looked back. The 6600s were a little harder to use – especially the dissolved oxygen probe, as you had to stretch a membrane over liquid in the probe and secure it with an o-ring without introducing any air bubbles. It took a little practice to get that right, and fortunately, newer probes don’t require it. Another problem was the optical turbidity probe wiper could wear out and cause problems with the probe. For the EXO2 sondes, it’s much better, as the probes are on the outside and the wiper is in the center, so all the probes are getting wiped. Another issue was that the 6600 calibration was stored in the brain of the data logger, not in the probe. In the EXOs, the calibration is stored in the probe itself, which allows for more flexibility. The biggest difference we have seen is with the pH probe: those come back much cleaner than before. Also the probes in the EXO2 are made of titanium, which is a plus.” Sondes are deployed for four weeks in the winter, and probes are changed out every two weeks in the summer. These practices help mitigate fouling effects. Of the four sites used at Grand Bay for SWMP monitoring, two seem to have more issues with equipment fouling. Sites are chosen in an attempt to capture different locations on a salinity scale. “Fouling is sometimes a significant problem. Sondes often get barnacles and algae attached to them. Some creatures can lay eggs on them, and sometimes fish can even get inside the guard on the sonde,” notes Cressman. “A high turbidity reading can actually mean a fish has become trapped inside the guard. I’ve even heard of a NERR that found a small octopus living inside a guard.”

Unlike some other NERRS, Grand Bay lacks a significant riverine influence. “We have a salt wedge system here, where we can have data that’s salt, salt, salt, then suddenly freshwater comes in,” Cressman explains. “We can see that at some areas especially, like Bayou Heron. We can see abrupt salinity and pH differences, especially if there’s been a big rain. We have multiple salinity levels across the Bay. If the salinity gets below a certain level, say 10 ppt, that can be a cause of concern.” In the Grand Bay NERR, brackish water predominates.

In addition to Bayou Heron, other SWMP sites at Grand Bay NERR are: Bayou Cumbest, Bangs Lake, Point aux Chenes and Crooked Bayou, which houses the Campbell Scientific weather station and provides the SWMP weather data. Of the four, Bayou Heron has the most freshwater input, and Point aux Chenes has the least. There are also five sentinel sites, including vegetation transects, along a gradient of marsh elevations. These transects indicate how the marsh responds to sea level rise. The sites represent a cross section of the Bay, essentially north to south.

“It’s a great place for birds,” says Cressman. “We have threatened Henslow’s sparrows, clapper rails, osprey, pelicans, bald eagles and yellow rails.  Plenty for ornithologists and other bird enthusiasts to see out here.”

In addition to a large array of bird life, Grand Bay NERR has diamondback terrapins, which are threatened in much of their former range. “It’s a unique turtle. It’s the only one we have that thrives in brackish water.” Fourteen staff oversee the NERR; seven are at least partially involved in monitoring programs. Citizen scientist volunteers occasionally help with data gathering, but not on a regular basis. Typically the NERR has at least one intern, and will have two this summer: one in education and one in science. Grand Bay is partnered with Grand Bay National Wildlife Refuge in an emerging phenology program. The NERR also has partnerships with Mississippi State University Coastal Research and Extension Center, Mississippi Gulf Coast Community College and the Mississippi Department of Marine Resources. “The NERR system also recently got funding for a Graduate Research Fellowship, so we will have that program in the future as well,” says Cressman.

In addition to the Research Fellowship funding, some other recent positive developments for Grand Bay NERR include the addition of a SWMP research technician, a sentinel site program that has really taken off and construction of a publicly-accessible boardwalk that was built right behind the NERR building where there are freshwater wetlands. “We’re excited about all these new developments,” says Cressman.

A big challenge to the Bay occurred in April 2005. “The NERR sits next to a phosphate fertilizer factory, and in 2005 the levy around the factory waste stack was breached, which caused a big acidic wastewater release. The pH dropped to 3.7 and wiped out our fish, oysters, everything. Complete devastation.” In 2012, after Hurricane Isaac, there was another large phosphate increase in the Bay. “One inch of rain adds about 10 million gallons of water to the waste stacks,” says Cressman. “It’s an enormous amount of water. The phosphate company has been shut down since 2014, but we still have to deal with its wastes. We have shared data with the EPA and the Mississippi Department of Environmental Quality. It’s now a Superfund Site. We hope to see its waste stacks closed so we don’t have this threat right next door.”

Despite the challenges brought by hurricane waters and having a phosphate factory for a neighbor, Cressman says the Bay has endured.

“I love this place!” she raves. “So much beautiful marsh here. So much to watch and learn. There’s always something new here, and the staff is great. I also have always liked the NERR mission, which is trying to connect the community to these resources. One of the ways we’ve been trying to do that is by bringing students and veterans in with what we call our Adventure Quenchers program, where we lead people on kayaking and birdwatching expeditions. I encourage everyone to come out and see all the things we have to offer here at Grand Bay NERR.”