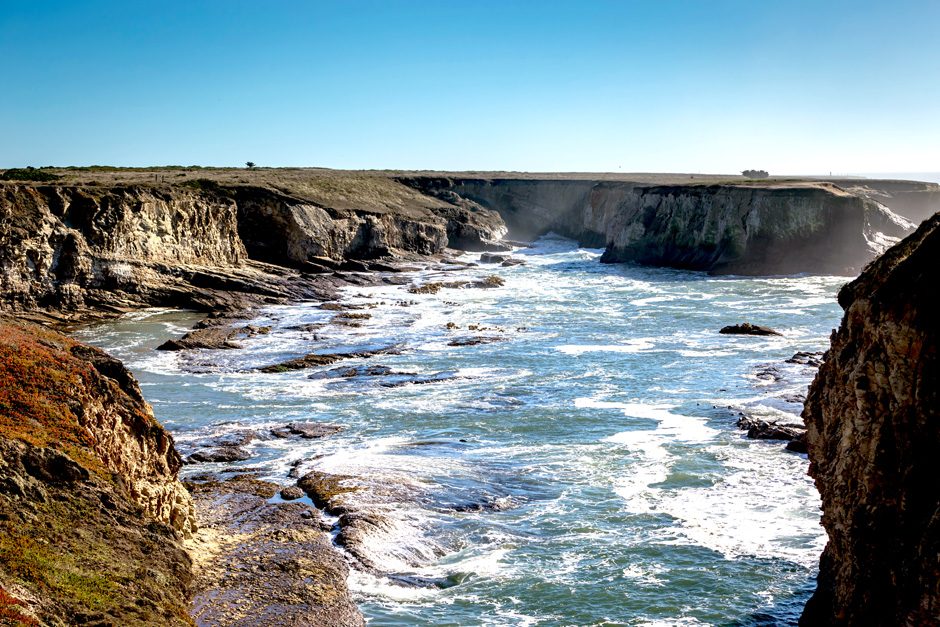 Mendocino College is a 2-yr college in the California Community College system with a great dedication to encouraging its students to pursue science and fieldwork. The area has many diverse and beautiful habitats, including intertidal zones and coastal prairies.

“We take pride in our ability to get our students out in the field for hands-on experiential learning activities at our Coastal Field Station,” says Dr. Steve Cardimona, Professor of Earth Science at Mendocino College and Chair of Mendocino College’s Coastal Field Station Committee. “As we are a Hispanic Serving Institution with a population that is a larger percentage female, many of our students are under-represented in the sciences.”

Biology instructor Dr. Brianna Zuber gets her classes out to perform ongoing monitoring of the health (diversity) of the local intertidal zones.  Zuber has also recently begun some studies of the California Coastal Prairie diversity that she expects to become ongoing, including comparative studies of the College’s relatively pristine property with the adjoining open lands of the California Coastal National Monument – Point Arena-Stornetta Unit.  The latter is also to complement work being performed by the California Native Plant Society on the neighboring open lands. 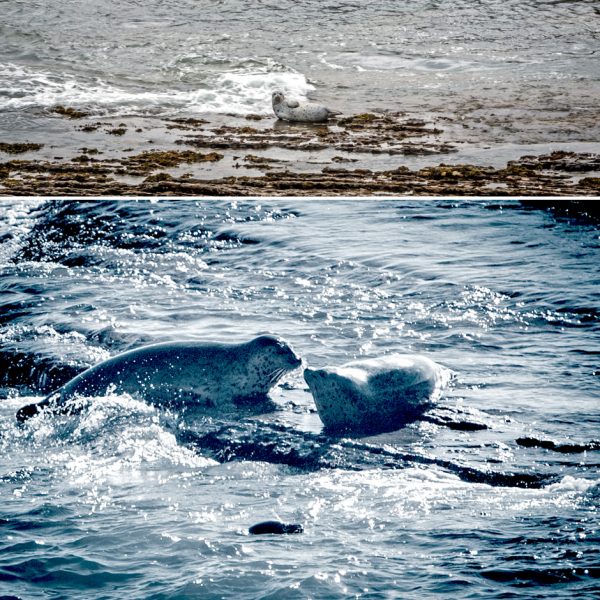 “We try to give our students hands-on experience like they might get if they were in the field as citizen scientists, except the experience is part of their classes,” explains Cardimona. “We have first and second-year undergraduates doing diversity calculations for species in our pristine intertidal zones. We also have them doing transect studies at low tide.”

Similar data is collected for the coastal prairies. Areas are checked over time and compared to areas that are specifically set aside as “no trample” sites to see differences. Species types and populations are recorded. “If you are not familiar with coastal prairies, they are ecosystems that are mostly grass-based, punctuated with coastal cypress in a temperate area. They extend up to Oregon and south to L.A.,” Cardimona explains.

Different species are monitored in the very different habitats of intertidal zones and coastal prairies. “Sea stars are one of the major species we monitor. We are looking for species diversity health as well as looking for signs of sea star wasting disease in the intertidal areas,” says Cardimona. “We want to see what influence changing water acidity, water temperature and water chemistry have on sea star populations and their health.” Abalone are also being monitored. Plankton studies are underway, with collected samples being analyzed for diversity under the microscope. 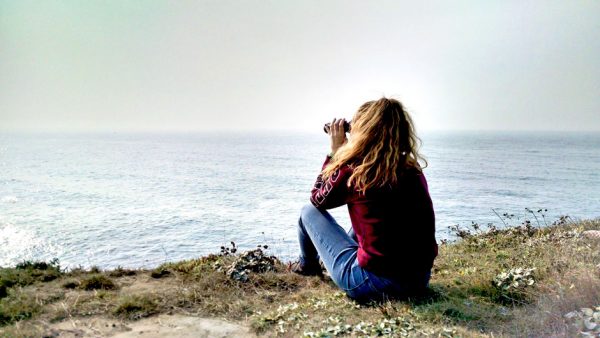 When looking at species diversity of the College Field Station area vs. outside areas, a couple of the parameters monitored include variations in wind and light conditions.

The influence of cattle also has an effect, as part of the neighboring area land is ranchland.

One of the California Coastal Prairie species being carefully monitored is the non-native, invasive ice plant. “When it was introduced to California many years ago, it was thought that the ice plant would be good for erosion control, but it turns out it is just the opposite for the coastal bluffs,” says Cardimona. Despite the threat posed by the ice plant, the Coastal Prairie habitat is generally healthy.

External groups have utilized the College Coastal Field Station site for specific environmental monitoring.  In particular, since 2006 they have hosted CODAR instrumentation operated by UC Davis for sea-surface current monitoring and GPS instrumentation as a part of the broader Plate Boundary Observatory administered by UNAVCO.  For the past few years, the College Coastal field station has offered an important base of operations for complementary diver groups from UC Santa Cruz and Reef Check California, each focusing on various portions of the offshore environment to get ongoing data on the health of the kelp forest. 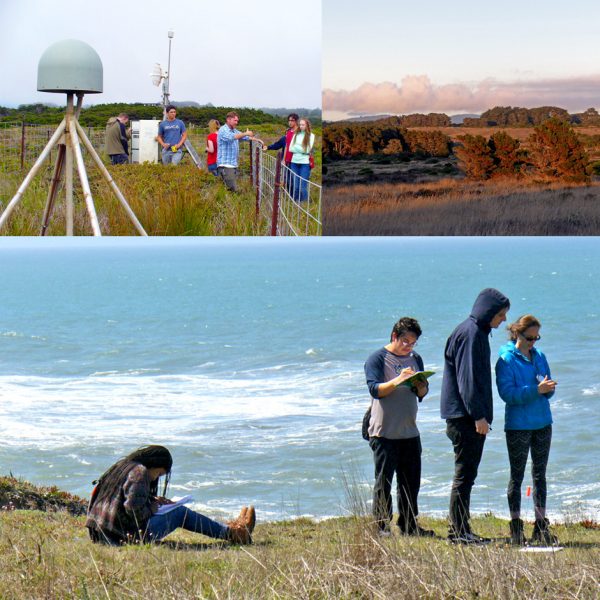 The Mendocino College Coastal Field Station students do not go out into the kelp beds, however. “They stay in the intertidal areas,” says Cardimona. “However, we have seen data which suggests the kelp forest habitats are stressed.”

While monitoring intertidal areas, College Coastal Field Station students use handheld meters to get water quality information. They also gather samples to take back to the lab for further tests.

“I work to connect the physical and life sciences,” says Cardimona. He uses a variety of equipment for data gathering, such as anemometers, TDS and pH meters. There is a Davis Instruments Vantage Vue weather station at the Ukiah campus with real-time data upload. Also in the Mendocino College district are similar weather stations at school centers in the towns of Willits and Lakeport.

“In the future, we plan on continuing to gather monitoring data and build our databases, in part by installing a similar weather station at our coastal field station,” says Cardimona.

Another, larger goal of the Mendocino College Coastal Field Station is the continuing support of the Math, Engineering, Science and Achievement (MESA) program at Mendocino College. MESA seeks to provide encouragement and help for students interested in pursuing a four-year degree in math, science or engineering. “It’s kind of like a club, but it has its own funding,” says Cardimona. “Students can do summer science outings with us at the Field Station. They do things for research projects such as calculating diversity statistics. Many of them are biology or earth science students.” 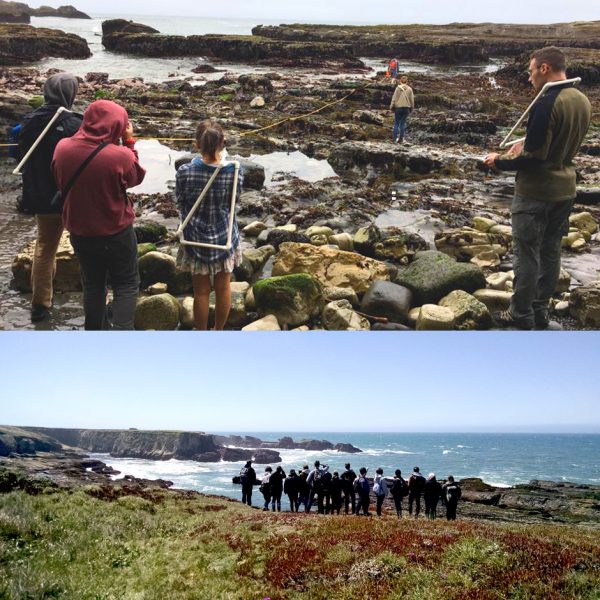 After students complete two years of undergraduate work and leave Mendocino College, many go to Humboldt State further north in California, or Sonoma State just south of Ukiah in Santa Rosa. Still, others often go east to the University of California at Davis. “We have many different science majors that students ultimately complete degrees in, not just biology and earth science, but also others such as chemistry and engineering,” Cardimona adds.

In his 17 years at Mendocino College, there have been some unique happenings during the course of doing fieldwork. “About a year ago, my biology colleague Brianna Zuber was on a bluff with our marine biology class, observing harbor seals, and incredibly, they saw the birth of a harbor seal pup,” he recalls fondly.

In terms of physical science happenings, recently a new sinkhole just north of the college property developed. “It happened overnight!” he remembers. “In our area, coastal erosion and plate tectonic activity due to our proximity to the San Andreas Fault only a few miles inland are two concerns, and sometimes the two may even be related.”

Cardimona looks forward to many more years of introducing Mendocino College students to field work at their Coastal Field Station and supporting many more budding scientists, especially those from underrepresented groups. “I also hope to connect the world with small colleges and field stations,” he says.