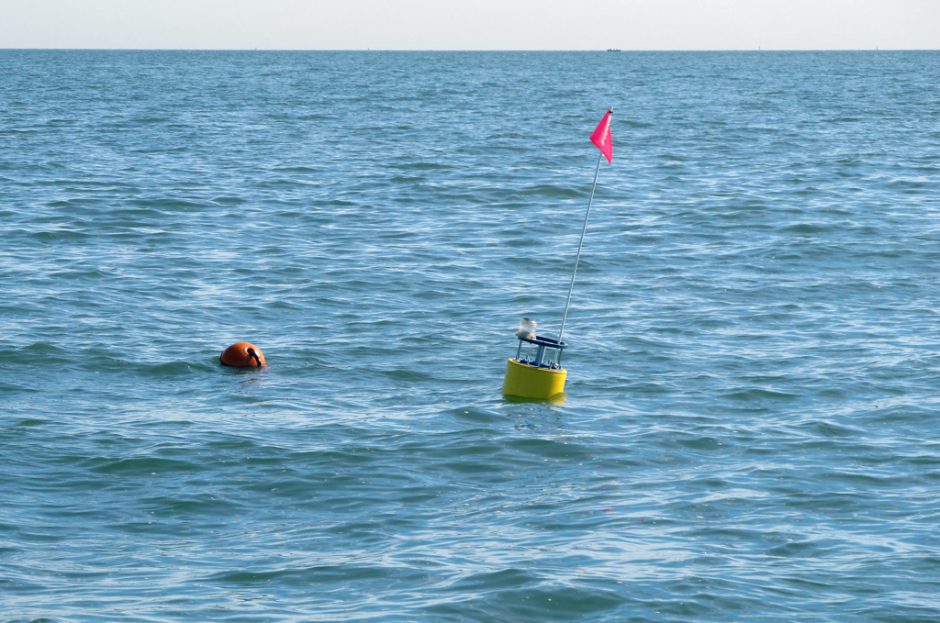 A topside buoy relays data from ESPniagara through a cellular modem and also supports a tube sampling 1 meter below the surface. (Credit: National Oceanic and Atmospheric Administration / Public Domain)

It may have taken 20 years and $20 million to develop, but Lake Erie researchers working to fight harmful algal blooms (HABs) now have a new tool to safeguard drinking water: ESPniagara. The advanced sampler has been called a “lab in a can” for its ability to sample microcystins, the most common algal toxin these days, in almost real time.

The big gadget’s name is a mashup between “ESP,” for environmental sample processor, and the name of Admiral Oliver Hazard Perry’s ship during the War of 1812.

“We wanted to name it something that was significant to Lake Erie,” said Tim Davis, molecular biologist and lead HABs researcher at the National Oceanic and Atmospheric Administration’s Great Lakes Environmental Research Lab (NOAA GLERL) in Ann Arbor, Mich. “Niagara was the flagship that Admiral Perry used in our winning battle near Bass Island and we kept the Great Lakes through the rest of the war.”

As the first ESP to be deployed in Lake Erie, the name is apt because it is in effect leading a charge that Davis and others are hopeful could one day lead to a network of the devices there. The lake’s western basin is the target, as that’s where the blooms are of greatest threat. Davis says that four ESPs, deployed in tandem with the lab’s real-time monitoring stations in the basin, could provide enough data. A test deployment of the ESPniagara in June 2016. (Credit: National Oceanic and Atmospheric Administration / Public Domain)

More measurements can surely help western Lake Erie researchers, but the real benefits are for those who manage drinking water withdrawn from the basin. With ESPniagara’s ability to sample at the surface and at depth, it’s possible to get data on microcystin no matter the conditions.

Davis told us how it all works following ESPniagara’s very first deployment in Lake Erie. It began in early September and wrapped up in mid-October 2016.

You might expect that the device has to hover somewhere near the surface to sample algae, but it’s a little too large for that. Instead it is mounted on a lander developed by scientists at the University of Washington that lets it sit on the lake’s bottom. The lander has a three-way valve permitting samples to be taken at depth if winds near the surface are too great.

“That’s important because most of the drinking water intakes around Lake Erie are at the bottom,” said Davis. “It’s really important to be able to look at both.”

But given good conditions, sampling at the surface is achieved through a tube that runs from the ESPniagara to a buoy. This small platform holds a cellular modem, connected to the ESP via a communication cable, that relays microcystin measurements back to scientists at the lab.

“It’s fully automated. It’s essentially a robot,” said Davis, describing some of the science at work inside the ESP. “It will analyze with the ELISA method, which is the same method we use in our labs and that drinking water systems use for raw and unfiltered water.”

Compared to going out, grabbing a discrete sample and then taking it back to analyze, the ESPniagara saves an incredible amount of time. Davis estimates about two hours’ turnaround time with more conventional approaches. What’s more, it can stay deployed for more than two months, transmitting data at pre-defined intervals the whole time. “We can sample every day,” said Davis. “We can program it to sample as frequently or as infrequently as we need.”

For its first long-term deployment, researchers set it to sample every morning at 10 a.m. The time just happened to coincide with regular runs to grab water samples from the same area. Davis and others are still going through the data collected, but the two sets are matching up well.

“Late in the summer, we see toxicity decline. A lot of our samples are below the detection limit,” said Davis. “The preliminary data (from the ESP) have shown a good relationship between what we’re seeing at our western Lake Erie sampling site on Mondays. Both sample sets have been below detection.”

Up next for investigators at NOAA GLERL is to continue work to improve their microcystin assay. They are also partnering with scientists from the Woods Hole Oceanographic Institution to develop an assay to detect cells of microcystis. And hopes are to come up with a dual-assay in the future that can measure multiple toxins, including saxitoxins.

Much more further down the road, Davis is looking to take toxin data and use them to form models similar to those currently available for HABs.

“The one thing that we want to make clear is that there’s no silver bullet. The ESP is a very powerful tool that we’re using in concert with our HAB tracker and HAB bulletin,” said Davis. “Right now we have models to predict blooms and if they’ll be growing, but not toxicity. With this, we can get an idea of what the toxicity is at the surface or depth and let managers know. … It also allows us to monitor at a frequency where we will be able to monitor microcystin.”

Funding for ESPniagara was provided by the Great Lakes Restoration Initiative with monies made available following the Toledo Water Crisis. It is a second-generation device following in the footsteps of the first ESP developed at the Monterey Bay Aquarium Research Institute. The University of Michigan’s Cooperative Institute for Limnology and Ecosystem Research is also assisting. Greg Doucette, a research oceanographer at NOAA’s Center for Coastal Environmental Health and Biomolecular Research in South Carolina, developed the ESPniagara’s microcystin assay.