From Scrub-Jay DNA to Cycles of Carbon, Water and Fire: Archbold Biological Station Offers A Deep Look at Conservation 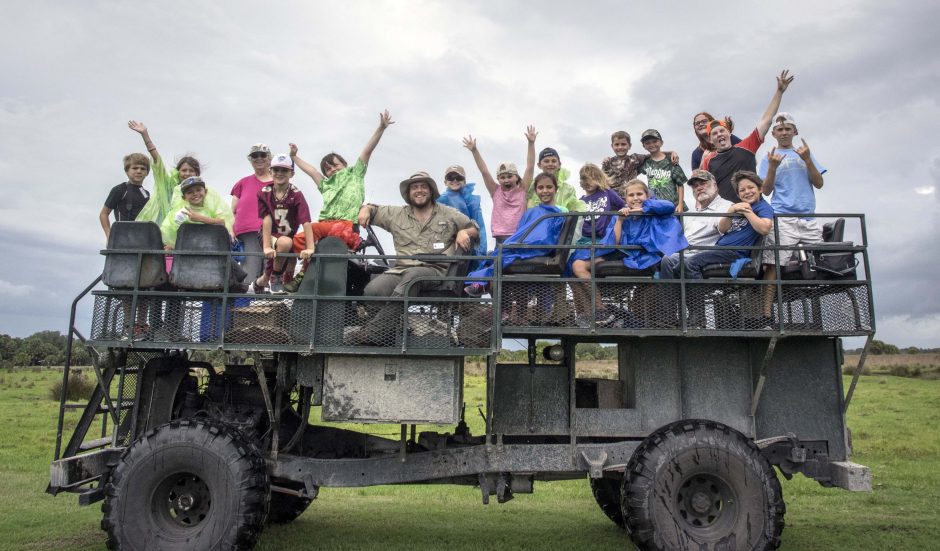 The oil industry is sometimes viewed as an enemy of conservation. But it was the oil industry that enabled the founding of Archbold Biological Station, one of the members of the Organization of Biological Field Stations (OBFS). Descended from John Dustin Archbold, President of Standard Oil of New Jersey, Richard Archbold used his private wealth to further the cause of field research and education. He became an explorer, aviator and perhaps most importantly, a research associate with the American Museum of Natural History. He established Archbold Biological Station in 1941 after the father of his friend Donald Roebling (from a famous family himself), donated 1,058 acres of pristine land in the heart of Florida to further Archbold’s research dreams.

Hilary Swain, Executive Director of Archbold Biological Station, explains some of the valuable fruits of Richard Archbold’s legacy: research and monitoring records that go back far enough to offer a long view of the changes in the land and wildlife.“We have weather data that goes back more than 75 years. We have long-term data sets for other types of data, too, such as hydrology, atmospheric, landscape and biological records. Our research data have been very important for many groups,” says Swain, who has been Executive Director for 20 years at Archbold. “We can perform a ‘hindcast’ with many types of samples we’ve collected. In particular, as new techniques are developed, we can apply them to samples we carefully collected years ago and archived. In this way, we can discover previously hidden connections and trends. We are also heavily involved in digitizing our extensive natural history specimen collections and putting them online for the public.” 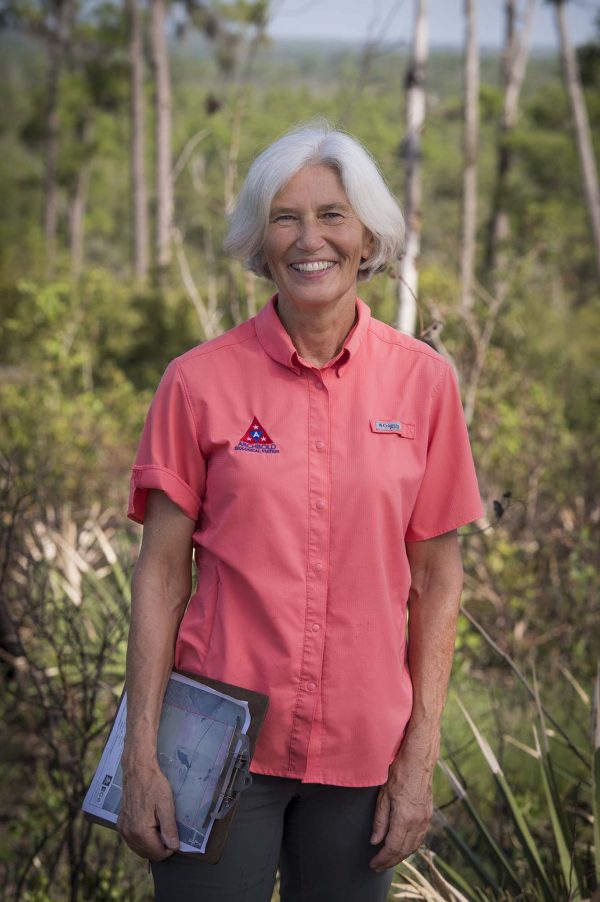 Stored samples are diverse. They include everything from blood samples from Florida Scrub-Jays, the only species endemic to Florida, to large museum-type specimen collections. Blood samples have been genome sequenced (by Cornell University), and have been used to support multiple research projects (population structure, genes associated with higher lifetime reproductive success, etc.). 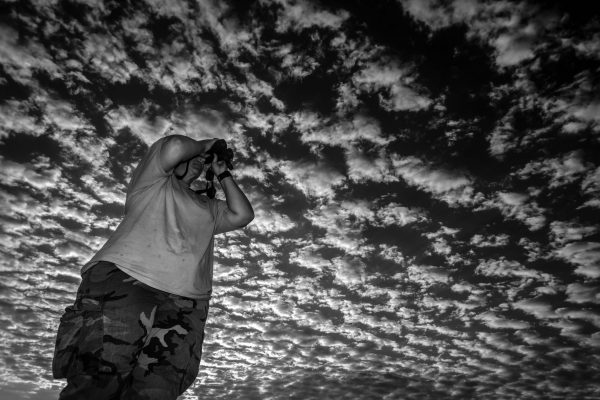 According to Swain, there are two overarching goals for scientific work at Archbold. The first is conservation of biodiversity; the second is the maintenance of natural cycles.

The first major category of work at Archbold is the conservation of biodiversity which has a focus on the long-term tracking of rare and threatened species using conservation and population biology methods. A central question is: Where are these populations in a given time? Another central question is: What is the genetic structure of populations?Finding the answer  involves collecting blood samples with DNA data in the field. It also includes traditional field techniques like using binoculars and field notebooks to track individual’s movements and other population changes. Bushnell Trophy Trail camera arrays are also used to track animal movements and help with creating population estimates. “Our researchers use trail cameras to tell us what animals are out there and where they are moving. These animals range from gopher tortoises, bobcats, wild hogs, and occasional Florida panthers. Some larger species, such as black bears, have been tracked using Lotek radio and satellite collars. Larger birds such as Crested Caracara have been tracked using VHF radio tags. We are considering deploying a network of sensors to detect smaller animal movements,” says Swain. Archbold scientists are exploring collaborations with Cornell University for tracking bird populations and movements in the heart of Florida. 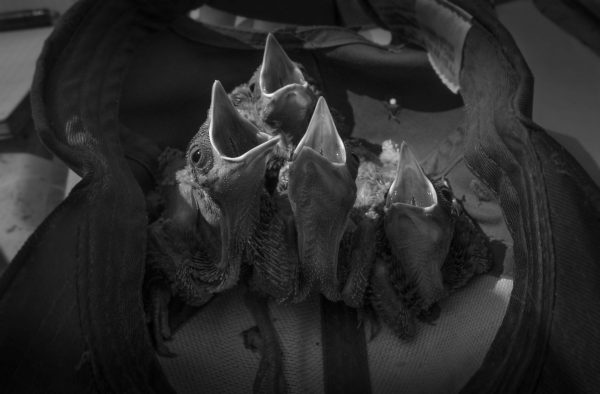 The second major category of environmental research at Archbold, maintenance of natural cycles, has a focus on the cycles of carbon, water, nutrients and fire. Climate data, flood and drought data, and controlled burn data are all included in this category. Archbold has controlled burn records that date back 50 years and fire mapping at Archbold dates back to the 1980s. Most fires are about 50 to 200 acres in size, and currently, a DJ1 Phantom 4 Pro drone is used to track fires. “From drone imagery, we develop fire intensity maps where each cell is 5 x 5 meters. The Archbold ‘grid’ is made up of about two million of these cells,” says Swain. Archbold land management data is maintained in MS SQL databases. “While the actual data are very important, management of these data is vital,” adds Swain.  A recently published Archbold fire paper can be found here.

It is because of intensive data management that Archbold can keep track of its multiple hydrology data streams, which come from its 20,000 acres of land and a part of the Everglades headwaters. There are at least 20 water projects currently going on at Archbold. “We have data from Lake Annie, which we’ve been collecting since the 1930s,” Swain says. Lake Annie is a special, pristine, 90-acre sinkhole lake whose sediment cores show a record of vegetation for the past 40,000 years. Many types of instrumentation are used at Archbold, including LI-COR equipment for measuring light and photosynthesis. LI-COR sensors have been used since 1983. A sonde is used to collect temperature, pH and oxygen data on a 15-minute basis. Temperature data are taken down the full lake profile which is 67 feet deep. “At first our lake data were collected manually, then with data loggers,” says Swain. By 2008, fully automated lake data were being collected, including weather data, pH, conductivity, temperature, air and light.  Archbold contributes lake data to the Consortium of Universities for the Advancement of Hydrologic Science Inc. (CUAHSI) a major hydrological database, supported by NSF. “We are now anticipating adding an EXO-2 sonde with additional sensors to deploy on a planned Fly Dog OSCAR profiling buoy. Much of the data and deployment technology on the new buoy will be from Estonia,” Swain mentions.

As well as all the data gathered at Archbold’s Station property, more typical of a nature reserve, a large proportion of the water and other types of data are collected at Archbold’s full-scale cattle ranch, also on its property, residence to 3,000 head of cattle. One of the cattle studies, for example, is used to evaluate long term sustainability of American agriculture. “The ranch, which is managed for research and education, is part of the Long-Term Agroecosystem research network (LTAR),” Swain explains. “It’s one of the 18 research sites networked by the USDA for long-term research. We collect controlled fire data on the open grasslands, as well as carbon cycling data and hydrological data to represent a typical cattle ranch. Reconyx trail cameras are used to track animal movements on ranch land. We have eddy flux towers which track CO2 and methane fluxes, in a collaboration with the University of Illinois study since 2012.” The cattle ranch has seen its share of pioneering work. “We were one of the first installations where methane sensors were deployed,” Swain says with pride. The results from these data are available to policy makers and to the general public, or are in the process of being made available. “Archbold’s goal has always been to get data such as those collected by LTAR into public hands and agency hands,” Swain emphasizes. Archbold protects 20 threatened and endangered species living on its large property, including the Florida Scrub-Jay and 15 listed plants. Archbold’s Florida scrub, an ancient sandy ecosystem with oak and other acid-loving plants and grasses, is ideal habitat for many of these rare flora and fauna. 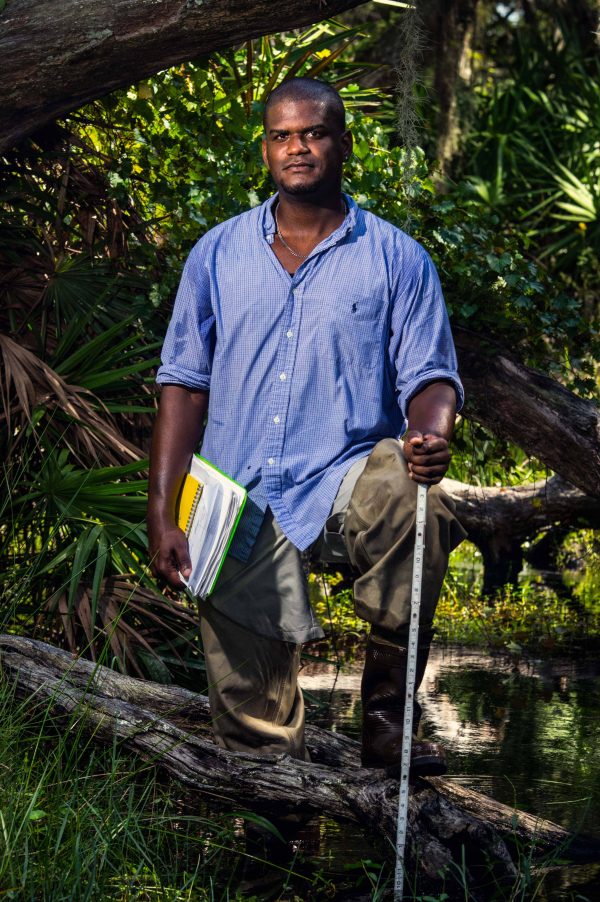 Archbold has a staff of about 50 people, with around 20-30 graduate students and interns. “We host graduate students from all over the country,” says Swain. “They are attracted by the long-term nature of our data, which is extensive.” There are also visiting classes from colleges and universities all over the country, such as Yale University. “A major focus for them is our extensive species lists: knowing what’s out there. We have one of the best documented species lists in the country, with many endemic plants and animals found only here in central Florida,” Swain explains.

Archbold’s research efforts enjoy support from the NSF and collaborations with other universities such as the University of Florida. Archbold is also a member of the Global Lake Ecological Observatory Network (GLEON), and contributes to global lake ecology data.

Swain has enjoyed her 20 years at Archbold Biological Station. “Science, conservation and education make up the tapestry of my everyday life,” Swain says. “I am lucky to be here.”