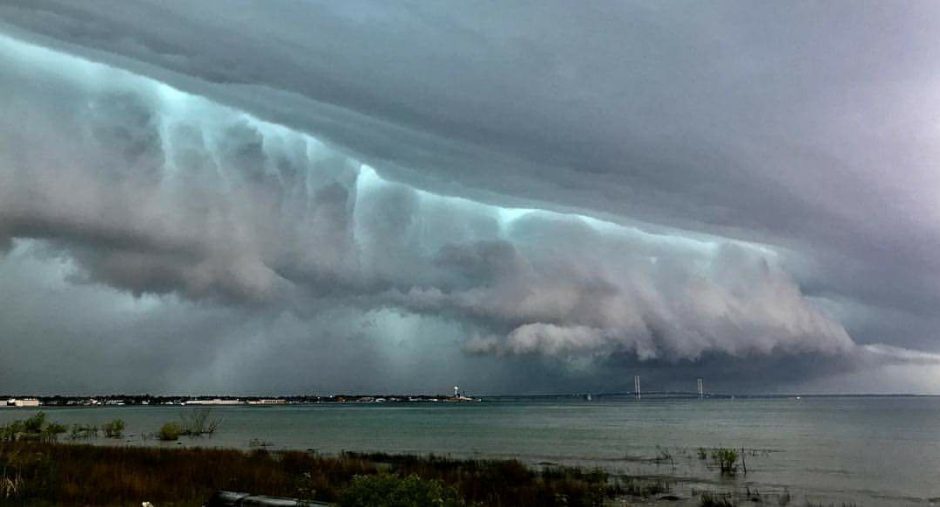 Great Lakes meteotsunamis are associated with pressure and wind speed changes from thunderstorms over the water. (Credit: NWS/Courtesy of Paola Catallo-Lieghio)

This spring, a pier along Lake Michigan’s eastern shore disappeared from view as water levels surged and swallowed the structure whole. The lake receded just as quickly.

The cause was a meteotsunami – a big wave triggered by the confluence of just the right wind speed and pressure generally brought on by a thunderstorm.  Though the disappearing act this one pulled on the Ludington pier was a novelty, the phenomenon is potentially dangerous, historically misdiagnosed and poorly forecasted in the Great Lakes.

After a Lake Erie meteotsunami in 2012 swept swimmers off a beach and swamped marinas, Great Lakes researchers honed in on what causes these waves and how to warn beachgoers and boaters one might be on the way. Today, we have a better understanding of how common Great Lakes meteotsunamis are and forecasting tools are in sight.

An analysis of historical weather and lake level data published in the journal Nature found that the Great Lakes typically see around 100 meteotsunamis a year, and a destructive one every 10 years. Past examples had been mislabeled or missed completely because this type of wave was historically poorly understood, with only a couple of researchers in places like Croatia and Russia studying them, according to Eric Anderson, an oceanographer at NOAA’s Great Lakes Environmental Research Laboratory.

“When I say a couple, it’s literally a couple of folks that have been looking into this maybe on the order of 10 to 20 years,” said Anderson, a co-author on the Nature study. “Before that, the terminology wasn’t even out there.”

Media coverage of the pier-swallowing Ludington wave referred to it as both a meteotsunami and a seiche, another type of large-scale wave that can lead to dramatically fluctuating water levels on the Great Lakes. But that’s not what happened here.

“Sometimes I see that and I think, ‘OK, we have to do better at explaining the difference between these two,’” Anderson said. “At the same time, I’m also excited that they’re covering it or that they’re even using the word meteotsunami even if it’s thrown in there with seiche.”

So what is it? As a thunderstorm propagates over a lake, atmospheric pressure pushes down on the surface. That causes a rise in water level — a wave — on the leading edge of the storm, just like pushing down on a waterbed, Anderson said. If the storm happens to be moving across the lake at the same speed as that wave, it can continue feeding energy into the wave and growing it to a potentially destructive size. A meteotsunami approaching a Great Lakes shore won’t look like a normal wave with breaking action the people are familiar with. Instead, they come on as a quick flood of water.

A seiche is also a single large wave caused by strong winds but on the scale of an entire lake. Scientists typically describe it as water sloshing back and forth in a bathtub, with lake levels dropping on one end and rising on the other, oscillating every 4 to 14 hours or so depending on the location.

On a spectrum, meteotsunamis fall between seiches and typical wind waves seen washing up on beaches every few seconds, Anderson said, with a wave period of between 2 minutes and 2 hours.

“In our case, we have a lot of waves (in the historical record) that were in that part of the spectrum that weren’t really explained,” Anderson said.

But those gaps have since been filled in by the Nature study, led by Adam Bechle and Chin Wu at the University of Wisconsin-Madison Department of Civil and Environmental Engineering. That project cross-referenced 17 years of water level data collected every 7 minutes at 32 NOAA with barometric pressure or wind speed data from the same period. They found that meteotsunamis are more common than previously thought, yet “water level oscillations associated with meteotsunamis are not considered in planning or design along the Great Lakes coasts, nor can current forecasting systems predict their occurrence for public safety efforts,” they wrote. “In general, the meteotsunami threat is a serious coastal hazard for the Great Lakes that has to date been underestimated.”

The study also found these events most commonly occur between late spring and summer — the busy season for Great Lakes beaches. That makes forecasting these waves and warning swimmers and boaters particularly important. 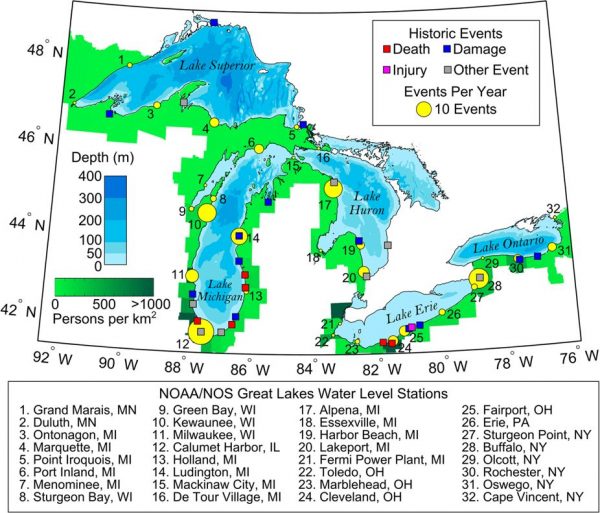 A map of reported meteotsunami events and the frequency of events observed at water level stations. (Credit: NOAA GLERL as published in Nature)

Since meteotsunamis are typically associated with thunderstorms, swimmers tend to get out of the water on their own when one is on the way. But that’s not always the case. And the waves are particularly dangerous once they decouple from the storm that created them. Though the storm may dissipate or blow inland, the wave is already in the lake. A meteotsunami that strikes one shore under foreboding skies can reflect and travel to the other side, swamping a beach with perfect swimming weather. That reflection is another level of uncertainty that predictive tools will have to account for, Anderson said.

“We’re really looking at honing in on that forecast piece now,” he said. “We’re not there yet. But it’s something I think we’ll have in a couple years.”

The Nature study also notes that meteotsunami patterns may shift with climate change. That will depend on how certain types of storms become more or less common in the future. Take derechos — long-lived, straight-line windstorms known for damaging winds — for example. One of the strongest such systems on record in the U.S. blew from Minnesota to New York 20 years ago, producing hurricane-strength winds and a Lake Michigan meteotsunami that capsized a tug boat.

Derecho conditions could become more intense in the region, Anderson said. Wave speeds are based on depth and will stay roughly the same in the Great Lakes. But how that syncs up with future derechos could change.

“They could change so that derechos are suddenly going at just the right sweet-spot speed to produce more meteotsunamis. Or maybe it’s going to happen the other way and they’re going to be going too fast,” Anderson said. “Exactly how that plays out remains to be seen.”

Top image: Great Lakes meteotsunamis are associated with pressure and wind speed changes from thunderstorms over the water. (Credit: NWS/Courtesy of Paola Catallo-Lieghio)