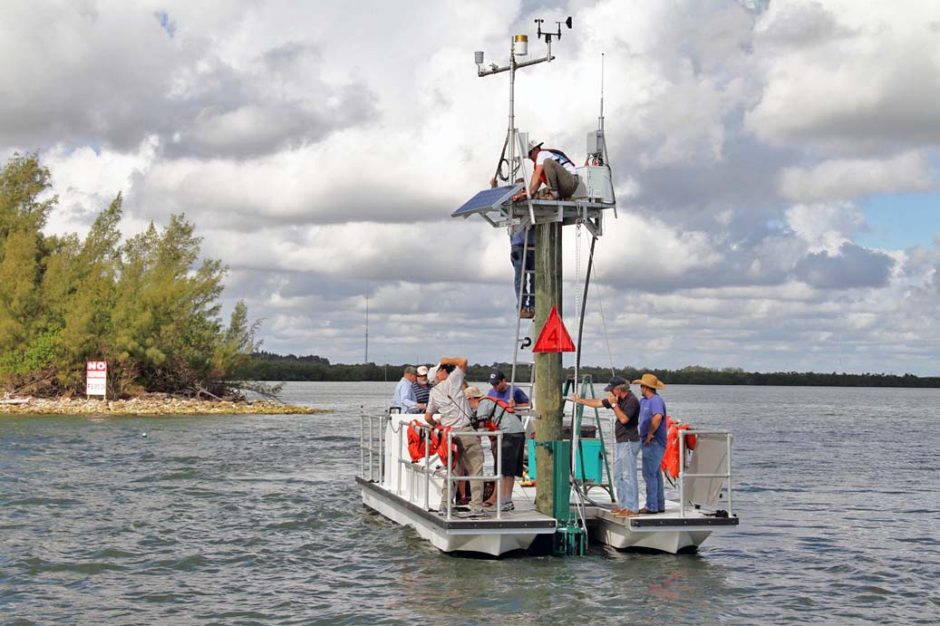 The first HBOI IRLON site was deployed in 2013 on an HBOI channel marker in the Indian River Lagoon. (Credit: IRLON, FAU Harbor Branch)

While research has been ongoing at Harbor Branch for over 45 years, the Florida Center for Coastal and Human Health at Harbor Branch Oceanographic Institute has only been in existence since July 2018. Amy Wright, Administrative Director of the Center and Research Professor at FAU-HBOI in Chemistry and Biology, explains the research going on at the new center in particular:

“A major research focus of the Center is Harmful Algal Blooms (HAB), primarily on the East Coast of Florida,” says Wright. “In the Indian River Lagoon, one of the most common places for us to see blooms, we are on the lookout for Aureoumbra, Pyrodinium, Pseudo-nitzschia, and Microcystis, all of which can cause blooms. Certain sites are more typical for HABs than others. We often see blooms of the cyanobacteria Microcystis in the St. Lucie Estuary and southern Indian Lagoon. The microalga, Aureoumbra, is responsible for brown tides, which block light to seagrass beds and cause fish kills. The dinoflagellate Pyrodinium produces saxitoxin, which can cause paralytic shellfish poisoning. A relatively new microbe that we see now, Pseudo-nitzschia, makes domoic acid, which causes amnesic shellfish poisoning. There are many different types of microorganisms in the IRL prior to an algal bloom…how do they interact…what causes the blooms? Quite a few of our FAU students are working on that question.” 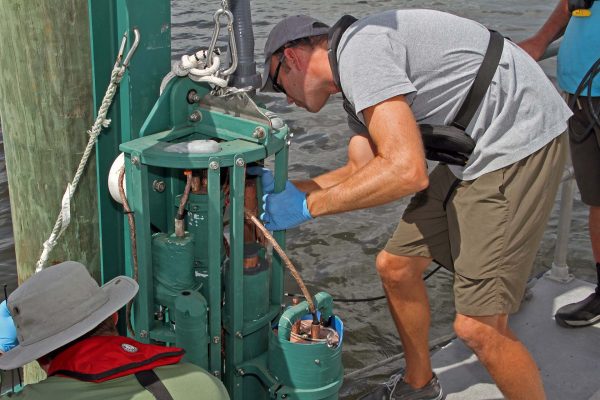 Below is a chart (from their website) which summarizes manufacturers, instruments and measurements made at IRLO:

View data, here.  The current data are available on that page.  For all archived data, see the LoboViz tab. 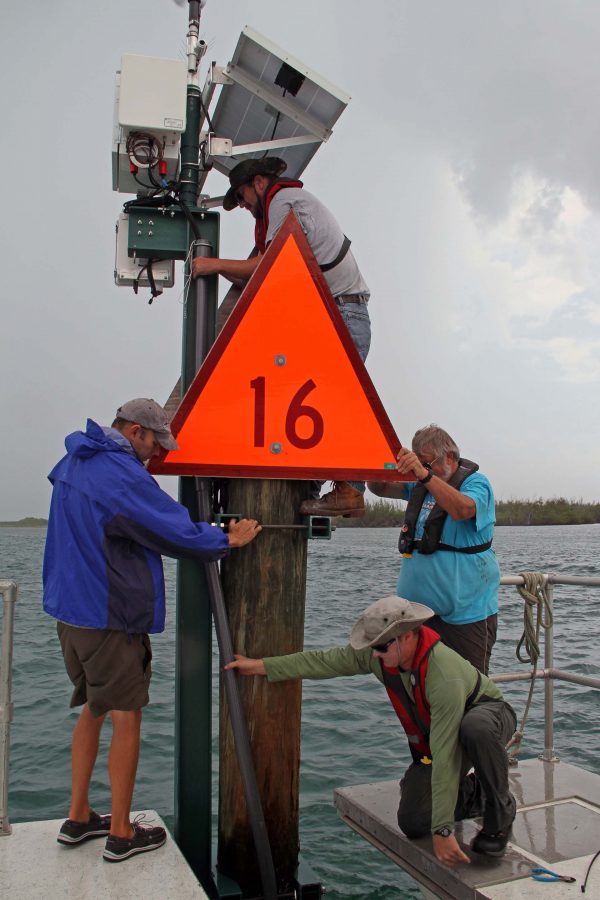 “We also employ more traditional methods for data gathering at Harbor Branch in addition to the LOBO sites,” says Wright. For example, during sampling trips, Secchi disks are still used to gather data on water clarity. “Traditional methods can be significantly cheaper but don’t provide continuous monitoring. Each IRLON site initially costs about $120,000 to set up,” Wright explains. Hanisak adds, “FAU-HBOI invested in the first IRLON site in 2013 and then a grant from Harbor Branch Oceanographic Institute Foundation expanded the network to four sites, all in Indian River and St. Lucie Counties. State funding through the Florida Department of Environmental Protection expanded the network with five sites in the St. Lucie Estuary and the nearby Indian River Lagoon. The final site in the C-44 Canal of the South Fork of the St. Lucie Estuary was added in 2016 with a grant from the South Florida Water Management District.”

One of Wright’s colleagues, FAU Associate Professor Laurent Chérubin, has developed smart sensor enabled drifters that are being used to measure ocean dynamics and recently, red tide blooms.  The drifters perform real-time sensing and send the data back wirelessly.

“Our drifters were designed to operate in the coastal environment and therefore they are connected via cellular to a web server that displays the data collected and the drifter location in real-time. They measure temperature, salinity, CDOM, chlorophyll, and light scattering,” says Chérubin. “These drifters are made to be deployed and recovered. They can be quickly mobilized to monitor any sort of bloom, release, discharge, etc. We have used them to study the water exchange between the nearshore and the IRL through Fort Pierce inlet and identified the factors that affect this exchange. More recently we have deployed them during the red tide event. Their measurements and pathways captured the general northward movement of the red tide. Through a sudden southward reversal in their path we were able to anticipate that the red tide was moving south again, which was confirmed by the IRL county warning messages. Chlorophyll measurements also confirmed the near shore concentration of the algal bloom.” More about the drifters can be found here.

In addition to gathering chemical data, Harbor Branch also wants to gather information on the genomics of the IRL in an effort to understand the whole system, specifically HABs. “We are doing metabolomic studies that monitor many organic molecules, not just toxins,” says Wright. We are also monitoring for toxicity using a panel of cell lines.” Nick Dickens does genomics and gathers eDNA data. Various researchers also collect water samples which contain fish cells in the Indian River Lagoon. These are used for eDNA analysis in the DNAngler citizen science program. 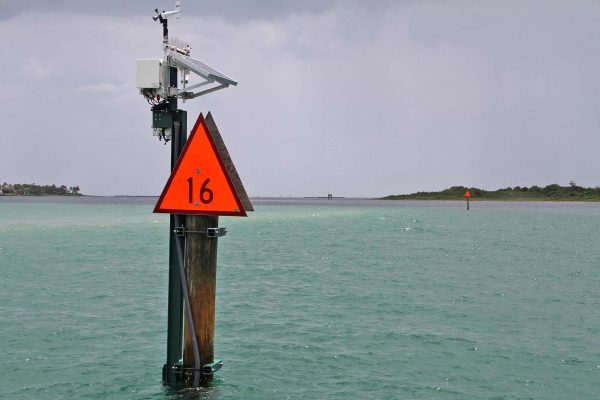 All IRLON sites are strategically located to capture freshwater and/or oceanic inputs into the estuary, such as this site located in the “crossroads”, where the St. Lucie Estuary, Indian River Lagoon, and St. Lucie Inlet intersect. (Credit: IRLON, FAU Harbor Branch)

FAU-HBOI is also looking at toxin distributions in rays and sea turtles. “A variety of optical measurements of HAB using Seabird technology as well as multi-spectral forward and backward light scatter data are also collected.”

“The Holographic Microscope has been sponsored by the NSF OTIC program. The microscope is a second generation device that operates under water. It can scan a few milliliters of water at a time, with each holographic image capturing about a half liter of water. It is autonomous, not connected to a boat, and programmed to operate on its own. It weighs about 70 lbs. in air,” says Sullivan. “Each particle detected by the microscope is represented in 3D in terms of the sampled volume and location in space. The first generation of this device was attached to a boat with a fiber optic cable. It weighed about 200 lbs. Its development was sponsored by the Office of Naval Research. In terms of environmental monitoring, we can put the microscope on a mooring in the sea and deploy it for about three weeks. We can look at HABs as they develop in real time, in 3D, and monitor the population as it changes. We can also look at phenomena such as coral spawning and larval fish recruitment, again, in real time and in 3D. A great thing about this technology is you can monitor plankton populations in their natural environment without disturbing them. You can also look at predator/prey relationships in a way not available through other techniques. For example, you may want to know: how do zooplankton prey on algae? To look at that, we can take pulse-pair images that look at the displacement of particles, in this case, looking at phytoplankton in a fluid environment, to look at how the images change as the ‘chase’ happens, and see how the microorganisms respond to flow.” 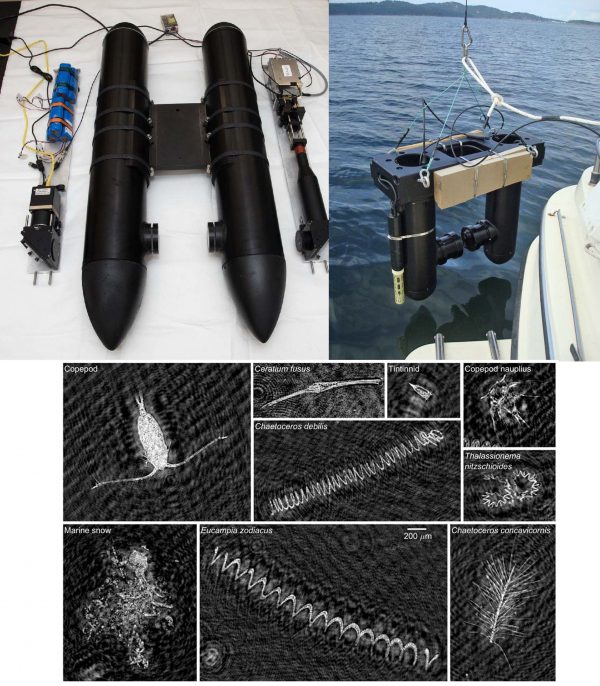 When it comes to students, FAU-HBOI has many FAU undergraduate and graduate students working on a variety of projects, many focused on aspects of HABs. In the summer, interns come to Harbor Branch from all over the country to do research, including the University of New Hampshire and the University of Connecticut.

In terms of the history of Harbor Branch Oceanographic Institute, Wright had this to say: “HBOI has a long history of ocean exploration, engineering and environmental research. The Center started in July, so that’s one of the latest developments. Eleven years ago, Harbor Branch became part of Florida Atlantic University. It has since added 12 new principal investigators. IRLON has been going on for five years.”

Wright has been at Harbor Branch for 34 years. “There is so much great work being done here, I have not really been able to mention everything,” she admits. “I myself spend a lot of time trying to discover new medicines. But that’s another story entirely.”