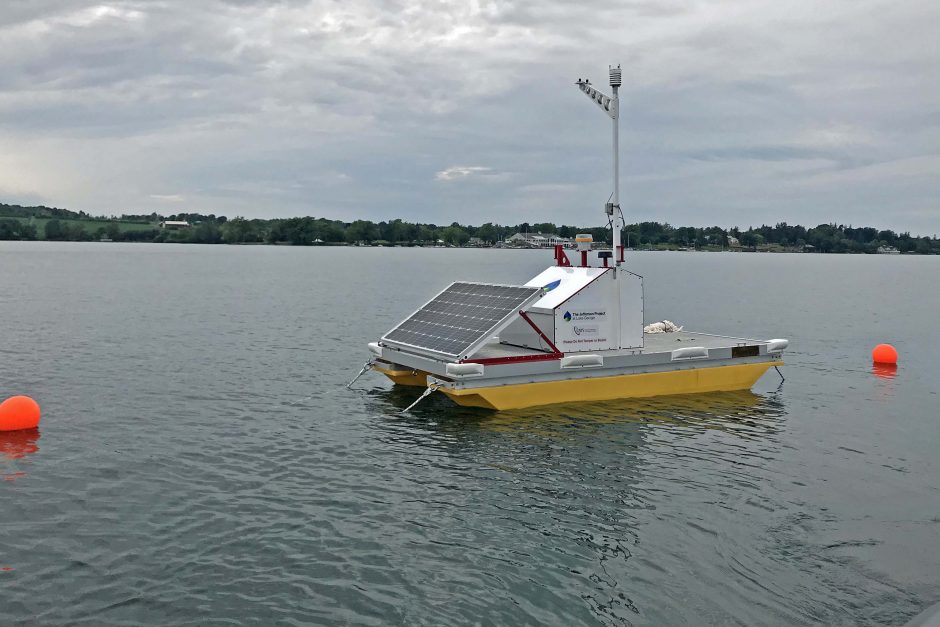 The deployed float platform. (Credit: The Jefferson Project, via communication)

Reports of harmful algal blooms (HABs) are more common than ever, yet the ultimate mechanisms that cause these events are poorly understood. Since 2013, the Jefferson Project has been developing cutting-edge technologies designed to achieve deeper understandings of lakes, and now the project is extending a pilot program to Skaneateles Lake in New York. EM spoke with Dr. Rick Relyea of the Rensselaer Polytechnic Institute (RPI) Darrin Fresh Water Institute and the Jefferson Project about the move to Skaneateles Lake.

“The vision of the Jefferson Project from its inception in 2013 has been to develop this approach to studying lakes in Lake George, and to create new technologies as part of that,” explains Dr. Relyea. “We always planned to expand once we hit a mature stage in the project, and bring our technology to other lakes. None of us wanted a one-off proposition on Lake George. We intended to use the project as a testing ground, learn about the technology and the lake, and then bring that knowledge to other places where we can be helpful.”

Lake George has never had a harmful algal bloom event—but the technology that the team there is developing may offer hope for people working to stop HABs.

“Rapid, real-time monitoring of lake conditions can be very helpful in understanding the underlying mechanisms causing HABs,” remarks Dr. Relyea. “To understand something that typically unfolds in a matter of days and sometimes disappears in a matter of days isn’t an easy thing. It’s a really quickly changing lake condition, and we think one of the ways to better understand it is to have rapidly measured conditions of the lake in all sorts of ways, from the temperature and the nutrients, to how the lake is flowing.” 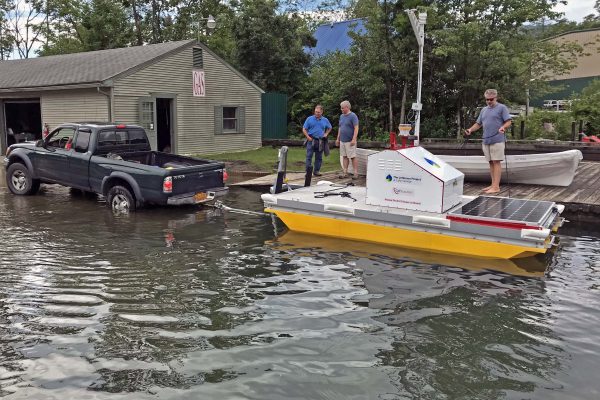 The team leaves Lake George with the pilot project equipment. (Credit: The Jefferson Project, via communication)

There are several challenges for monitoring lakes for HABs, and a few key ways that the pilot project’s technologies may help address those problems.

“One is that a lot of lake management teams monitor using traditional sampling techniques, such as taking water samples every couple of weeks,” details Dr. Relyea. “But when you do that you don’t have the ability to look at things that are rapidly changing, because you only have snapshots of data every couple of weeks. There are a lot of lakes that do have some sensor technologies, but nothing to the level of sophistication that we have on Lake George and have brought to Lake Skaneateles.”

The sensor suite on Skaneateles Lake is a subset of what is now on Lake George.

“This is a pilot project over a four-month period, so we’re bringing some of the sensors, but not nearly the size of the sensor network that we currently have on Lake George,” Dr. Relyea describes. “What we have brought to Skaneateles is a vertical profiler, a weather station on that profiler, and a current profiler built into it. Those three things provide three different sets of data on the lake. We have gone beyond what is commercially available to make it a very flexible, integrated system.”

The vertical profiler is something the Jefferson Project has built at RPI in collaboration with IBM.

“It’s akin to a computer-controlled winch that lowers a group of sensors from the surface of the lake to its bottom, and those sensors measure chlorophyll, blue-green algae, oxygen, pH, temperature, pretty traditional parameters,” states Dr. Relyea. “It goes up and down the water column, stopping about every half meter, and takes readings from top to bottom about every hour, 24/7, to provide the profile of the lake.”

The weather station sits atop the vertical profiler to provide information on weather conditions. 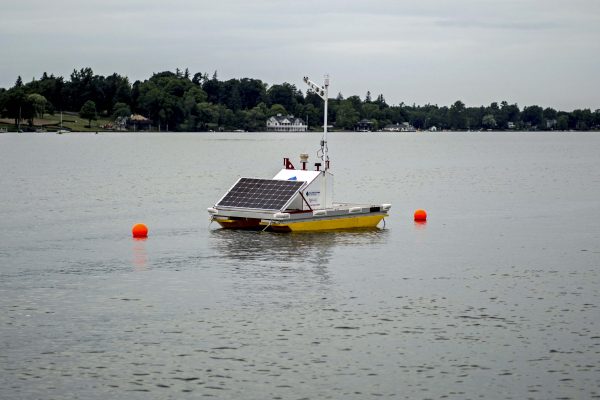 The sensor suite on a moving platform. (Credit: The Jefferson Project, via communication)

“What we’re most interested in for HABs is temperature, wind direction, and wind speed, because often harmful algal blooms happen when you have a lack of wind for a number of days,” comments Dr. Relyea. “They are also common during unusually warm weather, and may also be driven by the wind that happens earlier in the week and then dies down. Those are things we know; the world doesn’t really understand much more about how the weather conditions play into harmful algal blooms.”

The monitoring package is rounded out by an acoustic Doppler current profiler, which uses sound and Doppler technology similar to a police radar gun to determine where and how fast the water and the particles within are flowing.

“Every meter, as you descend into the lake, it can record which way the water is flowing and how fast,” remarks Dr. Relyea. “We care about that because the direction the water flows is also the direction that nutrients flow, and the direction of moving heat in the lake. The water near the surface may be flowing in a complete opposite direction than the deep water is.”

Now, this single, integrated unit has each of these instruments in action as part of one big, floating platform on the water of Skaneateles Lake.

When you think of harmful algal blooms, Florida is probably more likely to come to mind than upstate New York. In fact, Skaneateles Lake has traditionally been a source of very clean water.

“The city of Syracuse gets some of its water from Skaneateles Lake,” explains Dr. Relyea. “It’s very transparent, beautiful water, you may be able to see 20 or 30 feet down into the water which is pretty unusual, and the same is true of Lake George. Some of the best drinking water in New York State is in Skaneateles Lake and in Lake George.” 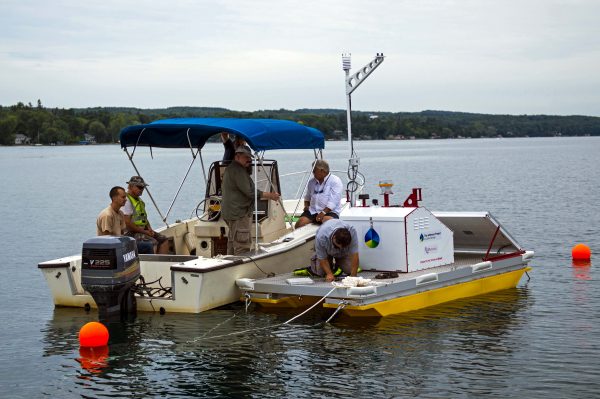 The team attaches moorings to the platform. (Credit: The Jefferson Project, via communication)

For this reason, Skaneateles Lake is what might be seen as a strange place for these algal events—at least it was in the past.

“It’s the kind of lake where you don’t expect harmful algal blooms,” remarks Dr. Relyea. “Lakes where you expect HABs have some sort of big source of nutrients coming in. These low nutrient lakes, by definition, don’t. So no one expected Skaneateles Lake to ever have a harmful algal bloom, and for decades and decades, it didn’t. Until last September, they had a big one. The question is why. And we don’t know the answer. No one knows the answer.”

Finding the answer is crucial for people in the region, but also for expanding our more general understanding of how HABs develop in freshwater. Unfortunately, it’s not an easy answer to tease out.

“These harmful algal blooms in lakes typically happen in the late summer or early fall when you have some source of nutrients coming into the lake, or coming up from the mud in the lake through various processes,” Dr. Relyea says. “There’s also some source of phosphorus, and these nutrients are pretty important, but so are unusually hot weather and a series of unusually calm days. Those three things happen a lot where you see a harmful algal bloom, and they seem to have happened in Skaneateles last fall.”

However, although the bloom appeared during an unusually warm week in September with no wind, the source of the extra nutrients that fueled the bloom remains unknown. Adding further complexity to the mystery of this first HAB in the lake, was its size.

“It happened for the first time that anyone had ever seen, and it happened all over the lake,” details Dr. Relyea. “When the wind picked up again, it blew all of this algae right near the surface to the north end, which is right where the city of Syracuse draws all of its water. So now you’ve got undrinkable water, in a place where most people would have bet a lot that you’d never see a harmful algal bloom. And that’s what drew the State Government to ask us if we would consider a pilot program to put some of our technology on that lake.”

The plan is to have the platform on the lake for about four months, and remove it before the lake is icy, in November or December.

“At that point, we’ll have a look at all the data, and we’re looking at the data already,” adds Dr. Relyea. “For example, there was a very localized, small harmful algal bloom about four days after we got on the lake. Nothing like we saw in 2017, but it was still very fortuitous that we got there when we did. We got to collect some data during an event, and we’re looking at those data right now.”

The next challenge the team faces? Processing the massive amounts of data real-time monitoring offers. 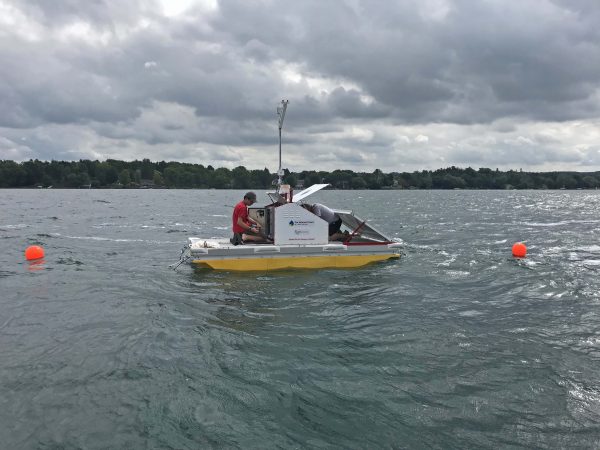 The team works on the platform. (Credit: The Jefferson Project, via communication)

“We’re talking about thousands of data points per day,” emphasizes Dr. Relyea. “If they are unfortunate enough to have another localized or large harmful algal bloom, we’ll be there to measure those conditions, and hopefully have a much better sense of what the early warning signs are if we can identify them.”

The grand challenge for the team—and the question that is on the minds of many Americans right now—is where and when the next harmful algal bloom will occur in a particular lake.

“That’s really what drives us: to work with all of the folks who have been doing research on Skaneateles Lake for decades before we ever arrived, to partner with them, to put our heads together, and from all the data we have from our sensors and other people’s work, identify the best predictors of where and when the next harmful algal bloom will happen,” Dr. Relyea says. “And that’s really a tremendous challenge because that’s something that people have not figured out for a couple of decades.”

Of course, experts also haven’t had the same kind of advanced technologies that this team is working with, either. And as the demand for answers grows, their technologies and understanding of how to deploy them advance.

“And although we understand some of the basic things that are associated with this, beyond that every lake seems different,” remarks Dr. Relyea. “That’s sort of the frustrating part. There has to be some commonality to all of these harmful algal blooms, what drives them, and why they’re becoming more common. But we don’t have a great idea of what that commonality is yet, and we’re hoping that the technology, which gives us rapid, high-frequency data will help illuminate some of those answers.”

“If this were easy, we would have known the answer years ago,” adds Dr. Relyea. “It is not easy.”