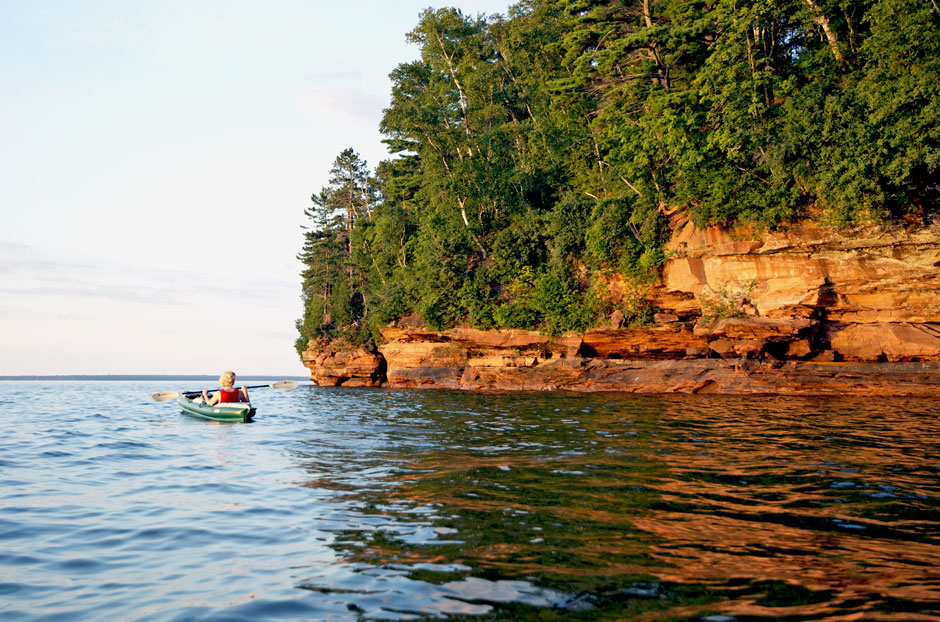 In 2012, for maybe the first time, Lake Superior got scummy.

Visitors to the Apostle Islands National Lakeshore reported algae washing up on shore around the park.

It was a marked shift for the park, made up of a portion of the Lake Superior lakeshore and nearby islands. The water surrounding the park is cold, clear and typically low in nutrients: a combination unlikely to result in algal blooms.

But, in 2012 and again in 2018 after violent storms, major algal blooms—ones observed over multiple days—washed ashore and clogged the beaches with unsightly, scummy algae.

Not the usual suspects

“We’re talking about unsightly blooms,” said Robert Sterner, director of the Large Lakes Observatory at the University of Minnesota—Duluth.

Even though they’re not toxic blooms, they’re still disruptive.

“People plan for weeks or months to come kayaking in Lake Superior and they show up and the water is like pea soup green,” Sterner said. “That’s not why they came.”

While algal blooms are often associated with specific land use, like fertilization of agricultural or residential land, it doesn’t seem to be an important factor in Lake Superior. Click To Tweet

“It’s really different from other cases, where you can point to some change in the landscape, intensive agriculture or uncontrolled sewage release from the bad old days,” Sterner said. “It does not seem to be a watershed/land use issue in that regard.”

Sterner published research this year in Limnology and Oceanography, trying to reconstruct the conditions that brought about the algal blooms.

Instead of land use, weather and climate seem to be driving the Lake Superior algal blooms. Although long-term monitoring data is sparse, Sterner and his team identified major rainstorms, higher than average streamflow and warmer than normal waters in the area that preceded both blooms.

In the years algal blooms occurred, the region experienced warmer temperatures for longer than in other years. The study calls them “unambiguously warm” years.

It’s likely the heavy rain resulted in more sediment than normal being washed into the lake, which was warmer than usual.

“These are powerful, powerful events,” Sterner said, noting they were storms that caused significant damage to infrastructure and property.

The sediment carried to the lake by these significant storms bore the nutrients that fed the blooms in 2012 and 2018. 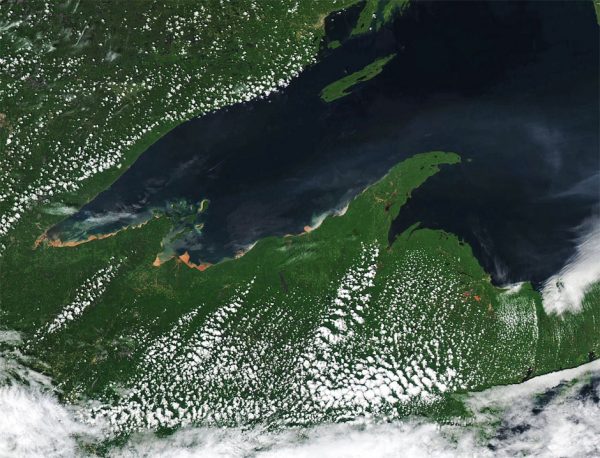 A satellite image from June 18, 2018 shows brown sediment washing into the water along Lake Superior’s shore after heavy rains. Sediment runoff could have provided the nutrients required for the 2012 and 2018 algal blooms in Lake Superior. (Credit: NASA Earth Observatory, see before and after image here)

That’s the likely story, but a relative lack of environmental monitoring in that part of Lake Superior means some holes still need to be filled in.

Since the algal blooms were unexpected, there wasn’t a clear record of data tailored to understanding them. Instead, the researchers had to piece together their cause using whatever data had already been collected for other purposes.

Researchers used precipitation levels from existing weather stations, flow rates in streams and rivers monitored by the United States Geological Survey, and lake temperature readings from buoys operated by the Large Lakes Observatory at University of Minnesota—Duluth. They also sampled the lake and rivers, measuring for phosphorus, nitrogen and other nutrients in the years leading up to the second bloom.

This was enough to piece together a probable cause for the algal blooms.

However, increased monitoring is needed to better understand why and when algal blooms appear in Lake Superior, Sterner said. And more studies and monitoring are planned.

Sterner says he and his team are planning further research, including some work on lakebed cores. By examining sediment cores from a nearby lake bed, the team will be able to see how conditions have changed in the area and whether or not algal blooms existed there before. Doing the same work in Lake Superior is less reliable since Lake Superior has such an active shoreline: waves disturb near-shore sediments regularly, meaning any record laid down in the sediment is churned up and ruined.

Sterner would like to have accurate contemporary records of the relevant measures. More monitoring buoys and river gauges would be an important start, he said.

With things as they stand now, it’s unlikely that algal blooms in Lake Superior will ever reach the extent, severity or level of scrutiny of those in Lake Erie, but there is reason to believe they might be a persistent problem.

While the effects of climate change vary by and within region, the Great Lakes region of the United States is projected to experience several trends that might more frequently recreate the conditions that led to these first algal blooms.

Climate change is expected to bring about more severe storms and warmer temperatures, according to the Fourth National Climate Assessment. The two factors that seem to have driven the algal blooms in 2012 and 2018 are likely to be more common in Lake Superior in the future, driven by climate change.

“Without the warming it seems unlikely we would have seen blooms, and the fact that it’s two historically big rain years—it’s coincidental evidence, but it’s pretty striking,” Sterner said.

Lake Superior has been highly sensitive to rising air temperatures.

For a number of factors, Lake Superior is warming faster than the average lake. One is earlier stratification in the summer.

Summer stratification can occur over a range of a couple of months, Sterner said. Giving surface water two months more to heat up through the summer can lead to drastic warming, which can foster the growth of algal blooms.

The difficulty of addressing climate change and slowing the warming that’s already occurred means the 2012 and 2018 blooms could be the first of more to come.

“If it is a climate-driven phenomenon, it seems we’ll have to get the climate under control to make a difference,” Sterner said. One could imagine a world where drastic erosion control could keep sediment from washing into the lake, but the storms that seem to be driving these blooms aren’t run of the mill events and run of the mill erosion controls won’t cut it.

“Cover crops or trees don’t stand a chance against these kinds of storms,” Sterner said.

Sterner is focused on expanding the monitoring done on the lake. Increased monitoring for algae, sediment, temperature and turbidity is in the works. Some sensors are already in place, but in a low nutrient environment like Lake Superior, sensors are hard pressed to provide accurate readings. Algae levels are often so low sensors struggle to provide an accurate reading.

Along with accurate flow data from additional river gauges, this data would provide a more complete picture of the conditions fueling algal blooms: not the 2012 and 2018 blooms, but the ones coming in the future.